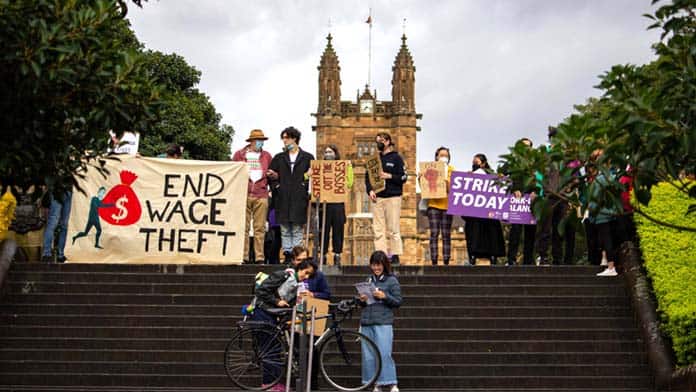 University workers at Sydney University took three days of strike action in May, shutting down the campus and kicking off the national bargaining round for university workers represented by the National Tertiary Education Union (NTEU).

The union is also fighting to force university management to withdraw their attacks on conditions, such as their attempt to abolish workload committees and end the right of academics to have research time allocations.

These strikes are also powered by anger at management’s behaviour over years. Their anxiety to maximise profits has led to an increasing reliance on repeat change proposals, which see workers sacked and workloads sky-rocketing. Simultaneously, wage theft has proliferated across the casual workforce, with managers acting to tighten new budget constraints.

After several years of crying poor and demanding further sacrifice, management posted an unprecedented $1 billion operating surplus for 2021. This was built on the overwork and underpayment of thousands of workers. While student numbers went up by 23 per cent in 2021, staff numbers went down by 4.5 per cent.

The strikes have turned the political mood at the campus around. New and enthusiastic union members have been leafleting the gates every morning to build the strikes, as well as joining the strategic debates about recruiting, picketing, striking, or forcing an increase to the union’s pay claim. Over 150 new members joined the union in May alone.

The Sydney University Camperdown campus, which is so big it has its own postcode, was physically shut down for three days in May, which is a remarkable show of strength for the union. Workers, students and community supporters ran an unprecedented number of pickets for each of the three days, including pickets at the Conservatorium of Music and Business School.

Through rain and shine, we tried to stop every single person attempting to cross the picket line, explain the importance of our demands and why they should support our strike. Management were so concerned by the action, they even encouraged people to work from home and many buildings were closed to the public entirely.

Online work presented a new industrial hurdle for the union. Many classes on the strike days were simply held online and many workers chose to work from home. Some in the union have raised concerns that this negates the effectiveness of strike action. However, this downplays the wins obtained from the strikes and the political importance of controlling the physical space.

The union should claim the strikes themselves as an enormous tactical success. Following the strikes, management walked back some of their worst attacks on workload committees, diluted their attack on the right to research time and gave workers $1000 and an administrative pay rise of 2.1 per cent.

But having shut down the physical campus, the next challenge for the union will be to move to shut down the digital campus. There is only one way to do this reliably, and that is to recruit hundreds more union members, and make the case that strikes are the only way we can win dignity at work, decent conditions and quality education.

With none of the key bargaining issues close to resolution, strike action will be needed throughout the second semester. The task for union members is clear: we need leafleting, walk-throughs, organising and recruitment to make every strike more powerful than the last. The one thing management can’t ignore is a union growing in strength that refuses to stop.

The successful strike action is a guide for what every branch should move towards, as the NTEU campaign spreads. The Western Sydney University branch struck for 24 hours in June, demanding 150 ongoing positions for casuals and a pay rise above the university’s 2 per cent offer. The University of Technology Sydney has also balloted for industrial action.

University workers across the industry should be coordinating strike and protest action. The issues branches are tackling are very similar across the country with pay, de-casualisation, and workloads arising as prominent demands. Additionally, the union must send a message to the Labor government that the federal October budget must prioritise funding for universities and reverse the Liberals’ attacks on the sector.

Coordination between branches will also be necessary to win the internal union debate for a real pay rise. The national executive requires NTEU branches to demand precisely 15 per cent pay rise over three years, though they can settle for less. With inflation predicted to reach 7 per cent by December, this approach risks binding workers to a real pay cut. The Sydney University and Australian National University branches want inflation plus 2.5 per cent a year to ensure a real pay rise. But if the national executive refuses to act, branches will have to coordinate nationally to force the change.

For university workers across the country, it’s time to get organised, spread the strikes, shut down campuses, and demand better funding. Sydney Uni’s successful action should be an inspiration.