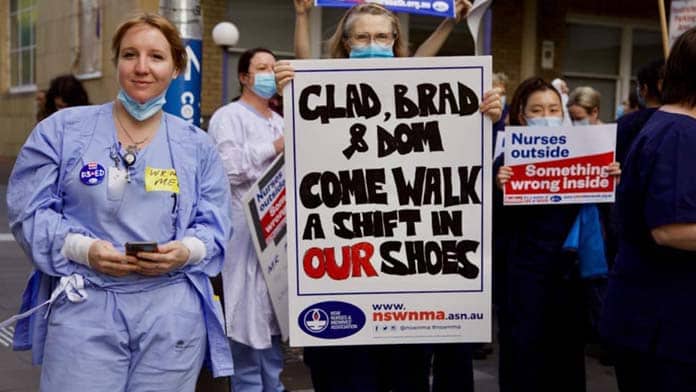 Stoppages and strike action by paramedics, nurses and teachers forced the NSW Liberals to back down on their proposed public sector pay freeze in last week’s budget.

While a good start, the Coalition can be pushed for much more. Last year’s 0.3 per cent pandemic pay rise, a pay cut after inflation, was an outright insult for those who had been lauded as “front-line heroes” in COVID wards and patient transport. The proposed return to a 1.5 per cent pay rise cap has been raised to 2.5 per cent—a round one win for union action.

Rather than the economy being in tatters, stimulus spending, house prices and domestic tourism are driving a rapid rebound. Treasurer Dominic Perrottet is crowing that NSW’s income from housing stamp duty is up $1 billion to $9 billion, and a budget surplus projected by the next term of government.

Paramedics, ambulance drivers and nurses have all defied Industrial Relations Commission (IRC) orders to stage industrial action. Paramedics are seeking a 4.7 per cent pay rise (2.5 per cent this year plus 2.2 per cent in arrears after the pay cut last year). They imposed further work bans for 24 hours on the day the NSW budget was delivered. NSW paramedics are the lowest paid in the country.

Hundreds of nurses have staged rolling walkouts across the state, striking for at least two hours across regional hospitals including Belmont, Bowral, Shoalhaven, Springwood, Port Macquarie and the Central Coast, demanding a better pay rise, nurse to patient ratios and an end to understaffing. Nurses in Lismore stopped work for 15 hours while in Sydney two hour strikes have taken place at RPA, Liverpool and Campbelltown hospitals.

Wyong Hospital branch President, Kelly Falconer, said that staffing ratios in NSW are worse than across Queensland and Victoria, with the result that, “Too many nurses and midwives are now at breaking point”.

While the government advertises that it is spending record amounts on new schools and hospitals, it has disadvantaged regional areas, the Central Coast and western Sydney. Just like at the Federal level, the state LNP has pork-barrelled its safe and marginal electorates. A wave of teachers’ actions in response to staffing shortages began after a walk out at Griffith, in the Riverina region. Blacktown Hospital, in Sydney’s west, saw doctor and nurse action win extra wards and maternity staff.

Teachers are also gearing up for action, after the union commissioned “Gallop inquiry” recommended a pay rise of 7.5 per cent per annum, to address increases in job complexity and workload.

More than ever, the pandemic has shown how much we all rely on frontline public sector workers. If the LNP can budget billions of dollars for infrastructure such as the Blue Mountains underpass tunnel, they also have the capacity to pay their workers.

While Premier Gladys Berejiklian yet again extols frontline workers in the most recent COVID outbreak as “heroes working 24/7”, her outsourcing denies private agency contact tracers a permanent 40 hour week. Having privatised much of the road and rail infrastructure, NSW TAFE is on the chopping block, with the recent sale of Scone TAFE to Racing NSW.

Unions NSW’s post budget Zoom meeting heard workers share stories of actions taken so far. The Berejiklian government, despite its COVID poll bounce, has lurched from scandal to scandal. The Liberals govern by a margin of only one seat, having lost several MPs, and lack control in the upper house.

Unions NSW and affiliated unions should call for a cross delegates meeting, to take advantage of the LNP shift over pay, and unite all of the struggles into a united campaign of militant action for significant pay rises, permanency and increased public investment.