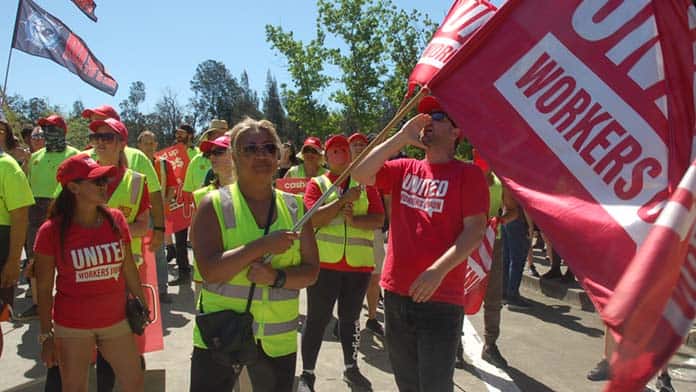 The United Workers Union has a well deserved reputation among the union movement for organising and militancy. James Supple examines what went wrong at Smeaton

After 14 weeks locked out the heroic resistance of 350 Coles workers at Smeaton Grange distribution centre in Sydney has ended in an unnecessary defeat.

Workers stood up defiantly for months to the company’s efforts to starve them out. But the United Workers Union (UWU) leadership singularly failed.

Workers voted to reject the company’s offer seven times before union officials and the company finally wore them down, with the agreement accepted in a final vote that concluded on 27 February with 71 per cent in favour.

Although the company continually insisted it had made its final offer, every no vote brought more concessions. It eventually agreed to an unlimited number of voluntary redundancies, so workers can leave with a payout and accept a new job offer at any time before the centre closes in 2023.

But workers failed to win their central demand for improved redundancy.

As one worker told Solidarity, “The new offer won’t address any of the items on the log of claims or lost wages. However the war of attrition that both Coles and the UWU have used against us worked.”

The UWU leadership played a shameful role in orchestrating a return to work on Coles’ terms.

The defeat is fundamentally a result of the union officials’ refusal to back Smeaton Grange to set a new benchmark for job security and redundancy as the industry faces a job-killing move to automation at Coles and Woolies.

The UWU never took Coles’ lockout seriously. There was no serious effort to organise the kind of strike fund needed to sustain workers for three months. Yet the union has over $1 million in an existing fund, and had over $94 million in cash and equivalents at the end of last financial year.

The officials never serious tried to establish a regular levy to support Smeaton workers at its other workplaces or among its 150,000 members, as is common in other unions. The only fund set up was an online crowdfunding appeal that helped provide four $200 Woolies vouchers for each worker over three months.

But the company poured resources into defeating the union.

As one of the workers explained, “a mass exodus of stock, machinery, and management out of Smeaton Grange occurred gradually several months before the members took protected action and the company responded with a lockout.

“It was blatantly obvious that the company were well prepared with contingency plans in place to sustain a lengthy site closure. Eastern Creek and Goulburn distribution centres began being assigned stores that Smeaton traditionally serviced. Two pop up sheds, one in Prospect, the other in Smithfield, were opened.”

The union officials refused to organise serious mass pickets of these other centres, and continually prevented efforts to call actions there.

Nor was there serious solidarity action at the other centres where Coles had moved work from Smeaton Grange—despite the fact that they are UWU sheds. Walkouts, bans on overtime, or even a go slow on work from Smeaton could have made a big difference.

This meant there was never enough pressure to beat Coles.

The early weeks of the lockout saw token pickets of the other sheds. But the pickets had limited impact because they moved on as soon as police issued directions.

The officials negotiated with police behind the scenes, assuring them the pickets would only last a short period.

Later in the dispute they worked to sow fear about workers being disciplined or dismissed if they joined pickets.

“The fear and ambiguity created around picketing essentially removed the only successful strategy the workers of Smeaton Grange had. Perhaps had we had more time to dispel the myths associated with the legalities surrounding picketing, we may have convinced more members to defy the unjust industrial relations laws and stand up for their right to protest,” a worker from Smeaton told Solidarity.

Underlying the officials’ failure was their unwillingness to defy the law. Hard pickets at the Coles sheds, to stop anything moving in or out, would have been unlawful under Australia’s draconian anti-strike laws. Solidarity action is also illegal.

But mass pickets in defiance of the law can win. Toll workers doing work for Coles in Melbourne successfully beat the company in 2012 with a solid picket that completely shut the warehouse down, stopping trucks going in or out.

This was despite the company’s effort to have the picket declared illegal, and a court order from the Supreme Court demanding the picket be lifted that named 20 workers. Picketing at Ausport at Port Botany shut down a company using scab labour after nine days in September.

If the union had been willing to mobilise Smeaton workers to picket, other unions would have mobilised numbers in support.

“When they realised Coles were in it for the long haul,” one worker told Solidarity, “they were unwilling to do what was need to get Coles to the bargaining table. They were not willing to spend the funds to allow the membership to be present on the picket line, there was no strategy, nothing to motivate people.”

“They decided it was a fight they couldn’t win.”

Instead the officials wore down members with useless meetings and votes. A Christmas Eve picket of Coles’ Eastern Creek distribution centre was called off to vote on an offer that had already been rejected. At least two other actions were called off when the union scheduled votes on new offers for the same day.

The repeated votes against Coles’ deal over several months show a majority of the workforce was willing to fight. But their union leaders only seemed to want to put effort into winding down the dispute.

The result holds hard lessons. Coles wants its disgusting treatment of Smeaton Grange to be an example to other sheds as they push ahead with automation.

While Coles and Woolies have made hundreds of millions out of the pandemic they are now organising to throw workers onto the scrap heap of unemployment.

The result at Smeaton Grange should sound the alarm for all Coles and Woolies warehouse workers to establish strike funds, build active rank-and-file solidarity between sheds and prepare to fight. The UWU leadership can’t be allowed to drag its feet again.

Smeaton workers should go back in holding their heads high. There will be another tough fight ahead after the return to work.

Each worker will now receive a letter from Coles asserting, “that some team members engaged in unlawful and inappropriate behaviour”. On the first day back at work they will be forced to undergo “Workplace Behaviour Training.”

This sets the stage for Coles to use provocation, the code of conduct and safety breaches as a pretext for individual sackings as they have done in the past.

Strong workplace organisation is going to be needed to stand up to this. Collective solidarity and work stoppages have stopped victimisation at Smeaton Grange before, they will be needed again.

Following the dispute, “the workers of Smeaton feel intense feelings of betrayal, disgust and dismay at the union”, as one worker put it. Some workers have even suggested leaving the union.

But leaving the union will only weaken workers’ organisation at the workplace, making it harder to organise against victimisation and management attacks on the workforce when everyone goes back.

Union officials can never be relied on to lead a fight. Their role as full-time negotiators between workers and the bosses mean they have different interests to the workforce.

As full-time bureaucrats in comfortable offices they live a very different life to that on the shopfloor under the bullying and control of management.

The solution is to build independent rank-and-file organisation within the union that can work with the officials when they do the right thing, and pressure them or act independently when necessary.

This is a form of organisation workers have developed many times in the past, from the metal shops of the Clyde in Scotland during the First World War to the strike movements of the 1970s in Australia.

Workers at Smeaton Grange began to form their own rank-and-file group, the Concerned Workers of Smeaton Grange (CWSG) when the UWU leadership absurdly declared that it was neutral in a non-union vote on the agreement in January.

“The CWSG was formed out of sheer necessity and frustration,” one worker explained. “The majority of members were still committed to carrying on fighting Coles in order to win a fair redundancy package. The UWU adopted a position of neutrality within the first month of the dispute, with no strategy other than to reach out to Coles for an offer.

“The CWSG made two successful ‘Vote No’ videos as an answer to, and to combat Coles boss Matt Swindells’ condescending and threatening ‘updates’.

“In my opinion the ‘Vote No’ campaign, combined with the threat of a day of action at Eastern Creek was the only reason the company made concessions on voluntary redundancies. This victory was made entirely independently to the efforts of the UWU and is a testament to the sheer determination and fighting spirit of the rank-and-file.”

If a rank-and-file group had existed at Smeaton before the dispute, it might have been possible to force the union to organise serious picketing early on, when the highest number of workers were willing to fight and Coles was vulnerable during the Christmas rush.

This is a lesson for workers everywhere. Rank-and-file organisation is the key to building fighting unions and can be the difference between victory and defeat.