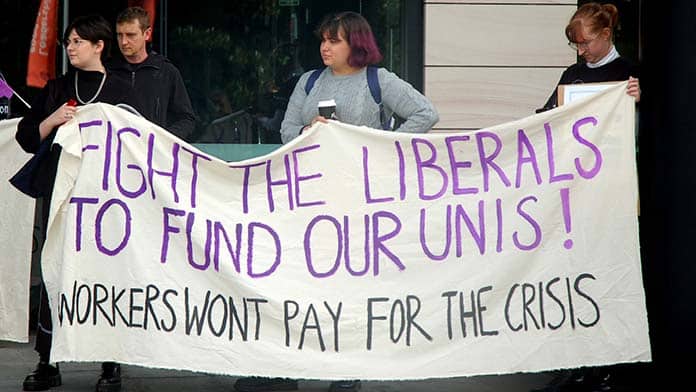 Around the country, university Vice-Chancellors are launching massive attacks on jobs, on top of their previous cuts to casual and fixed term staff.

University of New England is targeting 200 job cuts by the end of the year, the latest in a line of attacks. UNSW management want to axe close to 500 jobs and both University of Melbourne and Sydney University have threatened job losses to plug budget holes mostly caused by the loss of international students due to the pandemic.

Rather than lead a national fightback the NTEU leadership offered to help managers implement cuts to wages and conditions through their Jobs Protection Framework (JPF). Both argued that the only way to save jobs was for university workers to voluntarily give away their pay and conditions in exchange for vague promises on job security.

The JPF was rightly defeated by a massive rank and file revolt.

Nonetheless, the NTEU leadership supported similar concessionary agreement variations at individual campuses like La Trobe and Monash Universities among others.

It’s clear now that the concessions have not saved jobs, as we were promised by the bosses and the union officials. Monash has announced that it is pushing ahead with 300 job cuts.

At La Trobe, after members voted for a variation that cut pay by up to 10 per cent, and a round of voluntary redundancies, management are still pushing for between 215 and 415 further redundancies. And that will not be the end of it as La Trobe seeks further cost cuts.

Further concessions will only embolden VCs to increase their demands that workers pay for the crisis, and take the pressure off the Morrison government to fully fund higher education.

But it is possible to organise even in the face of these attacks and the rising unemployment more generally.

Organising by the University of Sydney casuals network and by student activists has forced the Dean of the Faculty of Arts and Social Sciences to scale back cuts to courses and casuals’ hours. Crucial subjects have been saved.

Demands on management—small and large—are key. At RMIT unionists are fighting over members being forced to return to unsafe workplaces. This campaign has been linked to opposing voluntary redundancies—with the local Branch demanding a health risk assessment be conducted of the workload impacts on remaining staff.

A demand that sacked staff get six months’ access to their emails, software and library resources has brought dozens of less active members into campaign networks. Wage theft disputes over a 25 per cent cut to marking rates and unpaid time to provide HR with massive amounts of documents has helped galvanise non-ongoing members.

But even at campuses where the branch presidents supported the concessionary JPF, determined organising can win the branch to a fighting position that puts real demands on the bosses.

At UTS, the branch has rejected a management-driven proposal to alter leave provisions after the university refused to guarantee funding for all casual jobs. The branch is now committed to a campaign to defend casuals’ jobs and oppose any other attacks from management. This is a step forward and opens the prospect of more serious union campaigning, although further rank-and-file organising will be necessary to ensure this.

Many NTEU members can see that making concessions to management without a fight leads down a dead end. But how to build a fight from the ground up is not so obvious. What’s required is three things: taking every opportunity to put member-led demands on managers; building local rank and file networks out of these disputes; and arguing for ways to relate to a wider layer of union members and build towards taking industrial action.

The union campaign also needs to target the Liberals’ funding cuts, fee hikes and denial of JobKeeper payments to universities.

The National University Staff Assembly on 24 August provides a good opportunity to do this. Hundreds of workers will come together to condemn both the Liberals’ and the Vice-Chancellors’ attacks on staff. NTEU branches and casuals’ networks around the country have been endorsing the action.

The assembly has the potential to build up the militant sentiment for mobilisations over the next few months. It can extend the argument and win further layers of staff to the idea that we will eventually need strike action in order to win big gains or fight off substantial attacks.

We need to organise to defeat any concessionary variations and job cuts on any campus. Alongside this we also need national days of action against the Liberals’ funding cuts, ideally organised together with any student campaign to defend education. These mobilisations can build up the confidence of workers to organise and strike.

Members of the NTEU at the University of Queensland kicked off their “Striketember” with a short strike and protest.