The Liberals are the real thugs, Albanese is doing the bosses’ dirty work—But Setka should stand down 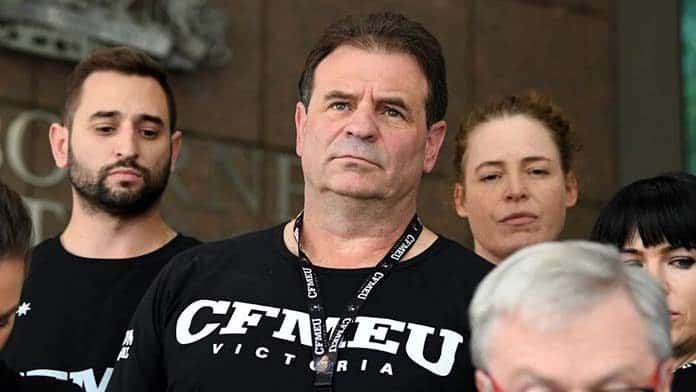 The campaign against John Setka, Victorian branch secretary of the CFMEU, has reached fever pitch. There is no doubt that the move by newly-installed Labor Left Opposition leader Anthony Albanese to expel him from the Labor Party is a disgraceful example of kow-towing to the bosses to prove Albanese’s conservative credentials.

Albanese says there is no place for Setka in the Labor Party because of the statements that he allegedly made in a closed CFMMEU executive meeting. It is obvious that someone on the CFMMEU executive was politically motivated to leak Setka’s conversation to the media.

Albanese’s move has been backed by explicit right-wingers like former Prime Minister Kevin Rudd, who is well known for his anti-union views.

Worse, Albanese’s move has given encouragement to the Liberals to target the union movement. Scott Morrison has taken the opportunity to call CFMEU members “thugs” and to move to introduce more anti-union legislation, the “Ensuring Integrity Bill”, which will give the government more powers to interfere with the union movement.

It is going to take a united union movement to stand up to Morrison and the bosses who want more laws to try and weaken the unions.

It is understandable that CFMMEU officials, Victorian ETU officials, CFMMEU delegates, and many rank and filers, are defending Setka. He and other CFMEU officials have been some of the few willing to defy anti-union laws to defend the interests of their members and have been persecuted as a result. Trumped up “blackmail” charges were dropped last year, but they have also faced constant harassment and intimidation by police and the ABCC, and a campaign of slander against Setka from right-wing politicians and the press.

But the domestic violence charges against Setka are a very serious issue that has not been properly addressed. These have now been reduced to two charges, to which he will plead guilty later this month, including one of “using a carriage service to harass a woman”. The fact that Setka has not been willing to take responsibility for his domestic actions has allowed the Liberals, the building bosses and his enemies in the right wing of the union movement and the Labor Party to target him.

His failure to stand down, while openly pleading guilty to the charges, is making a mockery of the union’s strong stand against domestic violence, support for women in the construction industry and stand against sexism more generally. It is also giving encouragement to openly sexist attitudes and to those who advocate for the men’s rights movement.

This is not about the private life of John and his wife; it is about what kind of union movement we need to effectively fight the bosses and fight for equality. By standing down, Setka could show that the union really is serious about fighting for women’s rights.

Exactly what Setka said in the CFMMEU executive meeting about Rosie Batty is not clear. If anything was said that indicated that he was a victim of laws that favour women, that is politically mistaken. But this was never a basis for expelling him from the Labor Party. And with ACTU secretary Sally McManus now denying there were comments about Rosie Batty or any comment about laws “being worse for men”, Albanese’s opportunistic reasons for expelling Setka from the Labor Party are exposed.

There is no doubt that it is more difficult for Setka to stand down now because of the attack on him from the right. But to maintain his position will weaken the CFMEU when it most needs unity to fight Morrison and the bosses. It will allow the Liberals to pose as the defenders of women’s rights.

This can only weaken the CFMEU and undermine the militancy that will be needed to stand up to the ABCC and the building corporations.

Setka’s refusal to step down also risks undermining the very good stand taken by the unions in the fight against the bigots during the Equal Marriage plebiscite.

It will be far better if Setka takes the initiative. He can step down on the basis of making a determined effort to rectify the mistakes and have the union absolutely committed to fighting sexism in any form, rather than have the chorus for his removal grow louder.

The Liberals are hypocrites

The Liberals care nothing about women’s rights—we know that from the number of Liberal women MPs who have resigned from the party. Morrison refused to back Labor’s move to provide abortions in public hospitals. The Liberals have opposed raising the wages of childcare workers. Liberal Education Minister Dan Tehan described Labor’s proposal to offer “free” childcare to families earning under $69,000 a year as a gateway to “communism” and “socialism”.

The fact that Setka is pleading guilty to the domestic violence charge is an albatross around his neck.

Rather than weakening the CFMEU or the union movement, there is an opportunity to put the union on an even better footing to fight the right wing of the movement if he does stand down.

The moves against Setka have exposed the lengths that the Labor leaders will go to do the dirty work of the bosses. They want to weaken the CFMEU’s defiance of the ABCC. Setka should not make it easier for them. Standing down is the right thing to do.

There is a huge fight ahead of the unions, which face an aggressive Liberal government and a Labor Party that is moving to the right. Labor has been exposed as a very unreliable ally. The unions need to focus on how we build the strongest possible defiance of the Liberals. The CFMEU has been central to that fight over the past few years—industrially, politically and in the social movements. To do that most effectively, it means the union has to show that it takes women’s rights as seriously as it takes the ABCC.