How Muckaty won against waste dump 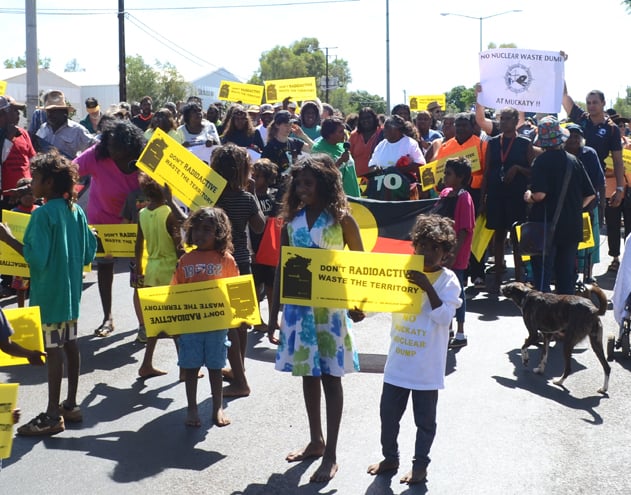 Warlmanpa people fighting attempts to dump nuclear waste on their land at Muckaty in the Northern Territory are celebrating an historic victory.

After eight years of struggle, the Commonwealth and Northern Land Council backed out of plans for a dump on the Muckaty Aboriginal Land Trust, two weeks into a Federal Court hearing challenging the proposal.

Their win is a massive boost for struggles for Aboriginal rights and against the nuclear industry. It provides crucial lessons for everyone struggling for justice. As young Warlmanpa leader Kylie Sambo told a victory press conference: “If we can stand up for what we believe in and win, from the middle of Australia, then so can you”.

The Federal Court proceedings had thrown a spotlight on the disgraceful actions of the Commonwealth Government, blackmailing impoverished Aboriginal people with promises of $12 million for essential service provision.

It also exposed the extent to which, during the term of Howard’s Aboriginal Affairs Minister Mal Brough, Land Councils had been kneecapped—pushed into fronting attacks on the rights of people they are supposed to represent.

But while support from law firm Maurice Blackburn was crucial, this is not a victory that was handed down by the court—it came from years of tireless grassroots campaigning. The Commonwealth knew that attempts to push ahead with Muckaty would have created ongoing political problems and required an enormous mobilisation of force to break the community. The campaign also shifted the position of the Northern Land Council executive, leaving the government without any Aboriginal support.

Warlmanpa mobilised strongly around the court hearings, marching to the Tennant Creek courthouse for the first day of proceedings, painting their bodies to dance when the court visited an outstation at Muckaty, and fronting national and international media with their message that the fight would only intensify if the Commonwealth tried to push ahead.

More than 300 people marched through the Tennant Creek in Central Australia on 25 May, a week before the opening of the court case, one of scores of demonstrations during the campaign.

The rally showcased the broad coalition that had been built over seven years of struggle. Traditional Owners were joined by trade unionists, environment groups like Friends of the Earth and the Australian Conservation Foundation as well as Aboriginal activists from across the country. Doctors from the Public Health Association told the crowd not to believe the government’s propaganda that the dump was needed for nuclear medicine.

The rally delivered a defiant message that the community was ready to take direct action to stop the waste dump, regardless of the outcome of the court proceedings.

Warlmanpa spokesperson Penny Phillips received the largest cheer of the day when she told the crowd: “I’m ready to block the road!” Local Labor MLA Gerry McCarthy even pledged he would join picket lines that “no one will be able to cross”.

The Darwin branch of the Maritime Union of Australia was well represented at the rally, with President Thomas Mayor and other delegates traveling more than 1000 kilometres to be there. They also pledged to join picket lines and refuse to handle any nuclear waste bound for Muckaty.

The Muckaty campaign, organised through the Beyond Nuclear Initiative, has had a consistent orientation to winning support from organised workers. The ACTU have a position of support for any trade unionist refusing to co-operate with the construction of a nuclear dump at Muckaty. This resolution was passed in 2010, following numerous speaking tours of Warlmanpa to workplaces and union conferences right across Australia.

Relating to the unions also required working with people inside the Labor Party, despite the Rudd Labor government’s refusal to abandon the plan. The campaign held meetings at a number of ALP national conferences with the support of union officials and other Labor figures. Greens Senator Scott Ludlam shared anti-dump platforms with ALP parliamentarians like Melissa Parke and NT Senator Nova Peris.

The defeat of the Muckaty dump plan is the latest in a series of set backs for the Commonwealth in attempting to impose a nuclear waste dump on remote Aboriginal lands over many decades. This year marks ten years since Aboriginal elders from Coober Pedy succeeded in their fight to stop a dump in remote South Australia.

But the radioactive racism on display in nuclear waste management shows no signs of abating. Aboriginal Affairs Minister Nigel Scullion issued a thinly veiled threat to the NLC, saying they have three months to find another site on Muckaty. NT Liberal Chief Minister Adam Giles is talking up the prospects of further NT nominations. But the Warlmanpa and the broader anti-dump have shown the way—if you organise and fight, you can win.