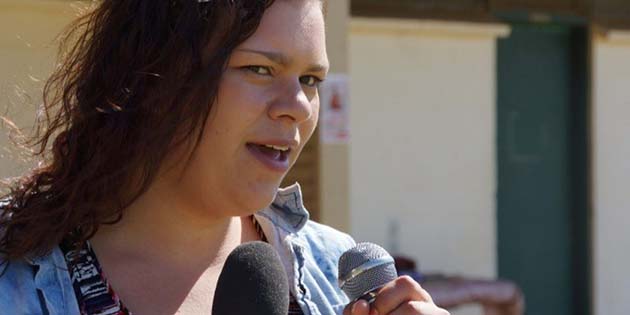 Images of teenager Dylan Voller hooded and strapped to a chair in Don Dale juvenile detention centre, broadcast by ABC’s Four Corners in August, shocked people around the world and stand as a symbol of the terrible abuse inflicted on Aboriginal children and youth in Australian prisons. Nationwide, more than 50 per cent of young people behind bars are Indigenous and the figure is 98 per cent in the NT.

Dylan was the most badly tortured of the many young people who appeared on the program. He was first incarcerated at 11 years of age. Like approximately 60 per cent of youth placed in Don Dale, he had also been placed under the care of the Department of Children and Families. He is now 19 and remains in prison.

Malcolm Turnbull moved quickly to quell the outrage at the abuse in Don Dale, announcing a Royal Commission.

The Commission will investigate both the juvenile detention system and ‘child protection’ in the NT. Thousands of people have protested across Australia demanding an end to the jailing of children and youth and justice for the victims of Don Dale and highlighting the failure of previous inquiries to lead to any real change.

In Alice Springs, there have been actions targeting NT Senator and Indigenous Affairs Minister Nigel Scullion every Tuesday.

Kirra Voller, Dylan’s sister, has spoken out at protests. She spoke to Solidarity about her family’s experiences and the need to continue the fight:

Dylan was an angry kid with behavioural issues, who needed help and guidance. Mum didn’t have a partner so she reached out to DCF (Department of Children and Families).

But there was no support for her. It was more like, he’s a bad kid he’s got no hope, you’ve done what you can now hand him over to us. But Mum was still trying and she still had much more to give.

If all the money they have spent over the years on him went into my Mum to help her with counselling and support workers it would have been a better result.

Mum didn’t have any say in anything. There were certain days only when we were allowed to visit him in his house.

I remember reading reports that had ridiculous prices like $270,000 for six months in a house. They set up these houses for kids like Dylan, with shift workers who are young [and inexperienced].

That particular home was [one he was sent to] through court as a last resort option, with two or three workers on at a time. They’d sit around and have a beer out the back and Dylan would be inside doing his own thing. It happens everywhere. Driving around town I’ll see little boys stopping me, asking me for a lift out the front of these houses where they are supposed to be cared for. There’s no one there looking out for them.

The first time he got charged with something and then sentenced was for running away from a DCF house. He’d come home to visit us but he breached his curfew.

A lot of times he would flare up and do something, for instance spitting because that’s his way of trying to protect himself. For a little boy that and his voice are the only weapons he had. He has said some pretty vile things but those are just words. He wasn’t taught to control that. If the right help had been given back then when he was just an angry kid it would have saved all the drama probably.

If they can train up New Zealanders who come over from another country why not train indigenous people to help in those areas.

People keep going on about his [lack of] respect for other people. You can’t expect a traumatised child to respect people, no one has ever respected them. They’re not going to respect people or authority at all. That’s the same for all the boys that are in there, in jail or protection.

Even to this day he’s scared, he told Mum that the other day that he’s scared he’s going to get bashed and he’s had a black eye since the show was aired.

We’re really thankful for everyone’s that’s been supportive. Seeing it from around Australia helps us.

Troubled kids can be helped. It’s not the same as an adult who is capable of knowing what they’re doing. Kids like Dylan who have just been through systematic abuse, not cared for and treated badly, they don’t think of themselves as any better. Kids shouldn’t be in prison at all. It’s wrong and there needs to be change.