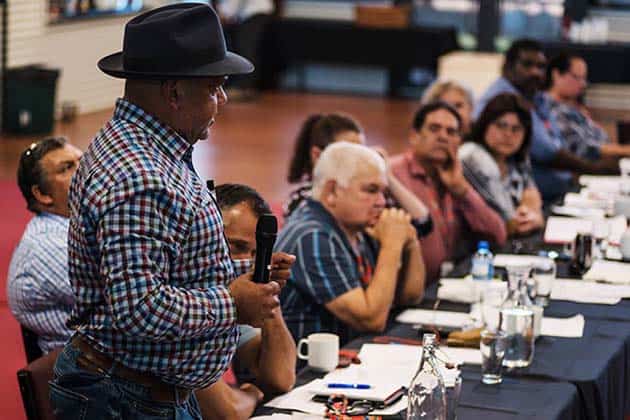 Noel Pearson’s plan to enshrine a toothless advisory body in the Constitution will change nothing for Aboriginal people, writes Paddy Gibson.

After the conclusion of a major Aboriginal conference at the Yulara resort near Uluru in May, many Aboriginal people and supporters across Australia were rejoicing. Press reports said that the conference had rejected the farce of “constitutional recognition” in favour of treaties, a real voice and serious structural change.

But the constitutional amendment being proposed by the Referendum Council following the conference offers Aboriginal people no rights whatsoever. They are advocating a toothless advisory body, to be completely shaped and set up by government.

Tellingly, the idea of “constitutional recognition” was floated by John Howard just after he launched the NT Intervention in 2007. Howard wanted a tokenistic preamble to the constitution that did nothing more that acknowledge Aboriginal prior occupation of Australia.

When Labor took office they continued to support constitutional reform. Julia Gillard funded an “Expert Panel” to look at possible options for change in 2010. From 2011, Reconciliation Australia, with Commonwealth support, began funding a flashy marketing campaign, first called “You me Unity” and then “Recognise” to popularise the idea of constitutional change.

In 2012, the Expert Panel came back with recommendations for self-determination and a treaty process, but also said that this would fail at a referendum. The panel did however call for a new clause that would prohibit racial discrimination and specify that laws could only be made which were of benefit to Aboriginal people.

Predictably, the Liberal party rejected the recommendations. But they did continue to fund Recognise, which now faced growing protests in Aboriginal communities.

Seeking to broker a compromise, in 2014, the conservative Indigenous figure Noel Pearson called for an Indigenous “voice to parliament” to be enshrined in the constitution. Legal academic Anne Twomey from the University of Sydney worked with Pearson’s Cape York Institute to draft a proposed constitutional amendment.

Crucially, the “voice” under this plan would be purely advisory and have no real powers. Twomey told The Australian it was, “developed specifically to bring the far right on side”. Pearson has worked hard to win support in the Liberal party and business community. A conservative organisation, Uphold & Recognise, with supporters including Liberal MPs Tim Wilson and Julian Leeser, is campaigning for the proposal.

In 2015, Turnbull appointed a Referendum Council to advise the government. The Council has tried to position itself as separate from the tainted Recognise and co-chair Pat Anderson, a long term rights campaigner has helped give the body some credibility. But the Council includes Tanya Hosch, a former Recognise director and is stacked with right wingers. Other members include former Howard government Minister Amanda Vanstone, a key architect of the push to close remote communities and pro-Intervention Aboriginal figures Pearson and Galarrwuy Yunupingu. One of the co-chairs is a prominent pro-Israel campaigner Mark Leibler.

In the last six months, the council has held twelve “dialogues” with Aboriginal communities around Australia to discuss possible reform options. The dialogues also elected delegates to travel to Uluru for a final conference, designed to establish a consensus recommendation for change to go in a Referendum Council report to government on 30 June.

The discussion paper prepared for these dialogues put forward a number of proposals sanctioned by the Council and approved by both Malcolm Turnbull and Bill Shorten for discussion. These all reflected the options for change initially advanced by the expert panel with one key addition—Noel Pearson’s proposal for the “voice to parliament”.

The “regional dialogues” were invitation only and capped at 100 participants. Despite this, they did reject the idea of tokenistic constitutional reform.

Key themes at all the discussions were demands for treaty, sovereignty and an end to the skyrocketing rates of child removal, incarceration and policies like the Intervention. Almost universally, the Recognise campaign was condemned.

These themes again dominated the Uluru discussion. Speaking to the press after the conference, Referendum Council co-chair Pat Anderson said acknowledgement in the constitution had been “totally rejected”.

The conference’s “Uluru statement from the Heart” made two demands, for “a First Nations Voice enshrined in the constitution” and a “Makarrata Commission to supervise a process of agreement making between governments and First Nations and truth-telling about our history”.

The call for a “First Nations Voice” has widely been seen as an endorsement of the constitutional amendment advocated by Pearson. On the ABC’s Q&A, flanked by other Referendum Council members Megan Davis and Pat Anderson, Pearson spelled out the details:

“The constitutional provision would say that parliament would legislate the voice. It would be up to parliament to set out the design, how people would be elected to it, what functions it would perform and what powers it would have.”

He was clear that the “voice” would lack any veto powers, with Pearson confirming, “It wouldn’t have a role in the legislative process of the parliament. It will have salutary political effect”.

Such a change to the constitution would change nothing at all for Aboriginal people. It would be the same kind of tokenism that has already been rejected by the Aboriginal dialogues that led up to Uluru.

Already, Aboriginal communities and organisations are heavily involved in debate which surrounds legislation that effects their communities. The “Stronger Futures” legislation, passed in 2012 to continue the racist powers of the NT Intervention, came after a multi-million dollar consultation process, not just with representative bodies, but with communities on the ground. The government simply ignored their voices, as they could easily do with this proposed “voice”.

Pat Anderson told Q&A that one attraction for the Uluru delegates of having a “voice” enshrined in the constitution was ensuring that, “it doesn’t get dismissed by the stroke of a pen by some current minister”. Over the last 50 years, numerous national Indigenous bodies have been abolished by government when they became politically inconvenient, most recently ATSIC in 2005.

The constitutional amendment proposed by the Cape York Institute however, would do nothing to stop any “voice” being abolished by government, who could simply pass new legislation creating a “voice” more to their liking. Anne Twomey told The Australian:

“the idea was that although the Constitution said there had to be a body, it was up to the parliament to decide how it should be composed… The reason for this was to avoid the ATSIC problem—the concern being that entrenching something like ATSIC in the Constitution, if it becomes dysfunctional you can’t get rid of it.”

Opposition to Pearson’s proposals emerged during the Uluru conference itself. On the second day, 19 elected delegates walked out, along with a number of activists who attended the conference to observe and protest against recognition.

Wiradjuri leader Jenny Munro said, “It’s not a dialogue, it’s a one-way conversation. They are not looking at any alternative options other than the Noel Pearson road map… that is about validating their sovereignty [the Crown] on our land, not ours.”

Since the conference, there have been growing concerns from participants. Ghillar, Michael Anderson from the Sovereign Union wrote, “In my opinion the conclusions that occurred at the Referendum Council’s National convention at Uluru were totally betrayed by the Q&A panel.”

Josie Crawshaw, one of the NT delegates, told a panel discussion in Darwin, “Pearson’s model, the advisory body… has been ruled out by every dialogue and Uluru. It needs to have some delegation of powers that the Federal Government has now… powers to make policies and programs. And we need a guaranteed source of revenue”.

Crawshaw is part of a “working group” of 29 delegates elected at Uluru. The group is meeting to finalise an endorsed model for the “voice”. A clear rejection of the Referendum Council’s interpretation of Uluru as a mandate for Pearson’s “advisory body” model is needed to do justice to the deep hostility to “symbolic change” expressed through all the dialogues.

“Agreement making” as discussed by Referendum Council leaders Noel Pearson and Megan Davis since the Uluru statement also poses no real challenge to the status quo. They have compared the process as similar to the negotiation of Indigenous Land Use Agreements (ILUAs) under the Native Title Act.

For many Aboriginal people, ILUAs are instruments of dispossession. They are pressured to agree to extinguish their meagre Native Title rights, often in exchange for crumbs under heavy pressure from powerful interests.

No wonder Jennifer Westacott, Chief Executive of the Business Council of Australia, spoke in support of the call for “Agreement making” on ABC radio. Native Title has provided no threat to capitalist interests. This is a far cry from the calls to fundamentally shift power relations imposed by colonisation that drive many Treaty campaigners.

The Uluru statement rightly condemned the exploding rates of child removal, incarceration and youth suicide and spoke of the “torment of our powerlessness”. Many delegates who voted to support the Uluru statement want serious change. But the constitutional change road is a dead end for these aspirations.

Even the tame call for an advisory body has been totally rejected by Deputy Prime Minister, Barnaby Joyce. Turnbull is reported as being cautious warning that “constitutional change would be very difficult”. That’s a “No”.

ALP leader Bill Shorten called on politicians to “keep an open mind” and said Labor would not shy away from the “big questions” but, cautiously, he also says he wants to study the long-term implications of an advisory body. Given Labor’s record, Shorten will want to be sure that any advisory body is toothless and token.

Real power will never come from proposals designed to be acceptable to big business and the Liberal party. Just like any major changes that have ever improved the lives of Aboriginal people it must be built through grassroots, collective organisation, protest and demonstrations reaching out to the power of organised workers.