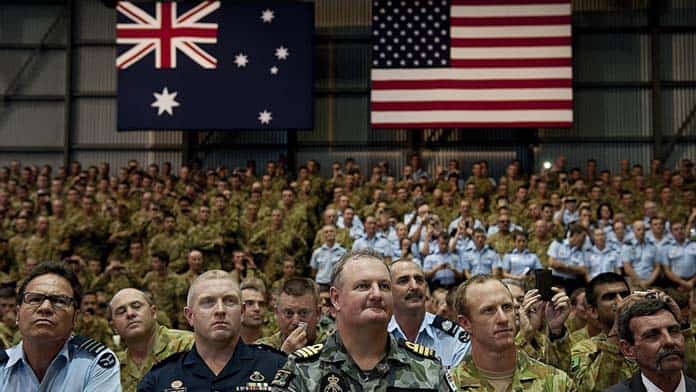 The ANZUS treaty has been key to Australia’s efforts to secure US backing for its own imperialist interests in the local region, writes Miro Sandev

Australian and US warmongers will this month celebrate 70 years of the ANZUS treaty, which formalised the US-Australia alliance.

The Australian, New Zealand and US Security Treaty (ANZUS) was signed in 1951. The pact pledged that if other forces in the Pacific region attacked one of the pact countries, or their troops stationed there, they all would consider it a threat to their own security and take action.

There is a popular misconception that this treaty—and the aggressive imperialism and support for US wars that underpins it—was foisted on Australia by the US, and that Australia acts as a “lap-dog” caving in to US pressure. In fact, it was Australian officials who were more enthusiastic to secure the agreement.

The Second World War saw the US definitively surpass Britain as both the leading world power and the dominant power in the Asia-Pacific. Australia wanted a guarantee of US military support in order to advance its own interests.

The Australian government pushed continually for a security treaty with the US following the end of the war.

While it was satisfied to secure ANZUS, Australia was also disappointed that the treaty and questions of South Pacific strategy did not seem as pressing to the US as Europe or the Middle East.

Australia had wanted an even more expansive pact, like NATO, that would see all the other pact countries automatically declare war in the event of an attack on a pact country.

The onset of the Cold War bolstered Australia’s push for the alliance, with the US and Australia in the middle of laying waste to parts of Korea by 1950, committing war crimes such as dropping napalm and destroying civilian crops. This was done in the name of countering “communism”, but the real goal was control of the region by Australia and its Western imperialist allies.

Australia developed as a settler-colonial state and an outpost of the British Empire among Asian and Pacific peoples. From the 1850s, a distinct Australian ruling class emerged with a sense of its own independent interests in the region.

The rulers of the colonies repeatedly pushed for Britain to take over more of the South Pacific, demanding the seizure of Fiji, Vanuatu and Samoa. In 1883 Queensland attempted to annex parts of East New Guinea on behalf of the British empire.

Britain repudiated this attempt, before agreeing to annexation the following year.

Australia operates as a sub-imperialist power, using the backing and support of a more powerful imperialist ally to dominate the immediate region—initially Britain, today the US.

But Australia’s rulers have always feared that their great power patron might lose interest and prioritise military intervention elsewhere in the world.

Because of this, they have always sought to embroil their imperialist backer deeper into the Asia-Pacific as a way of safeguarding their own interests.

The calls often heard for Australia to have a more independent foreign policy fail to see that Australia has long had its own policy—a militarism and support for war often more enthusiastic than its imperialist allies.

We are taught at school that “underdog” diggers in World War I were sacrificed by British officials, in the pursuit of British war aims. But Australia’s actions in the Pacific put paid to these national myths.

Australia’s first act in the war was to seize German-controlled New Guinea and occupy Nauru, Bougainville and other Pacific islands south of the equator. In this it was following the established principle among its rulers that these territories were part of its “defence region”, or zone of influence.

Following the war Australia received mandates on all these islands giving it control of them.

Australia also pushed to take over the Marshall, Caroline, Marianne and Pelew island groups north of the equator. The only thing that stopped this was that Britain had promised them to its ally Japan.

These are not the actions of a “lap-dog” simply following Britain into battle but show Australia’s rulers using their role in the war to further their own imperialist interests in the region.

As British military decline became obvious after the Second World War and especially after British humiliation in the Suez Canal Crisis in 1956, where the US vetoed a British invasion of Egypt.

Australia increasingly turned to the US.

Another example of Australian aggression is the dispute over West Papua. In the 1960s the Dutch colonial rulers began negotiating with the newly independent Indonesia over control of West Papua.

Australia strongly opposed Indonesian sovereignty and pressed the Dutch to maintain colonial control, even offering them military aid. Failing that, it argued that West Papua should be transferred to Australia, given that it already controlled Papua New Guinea. Australia’s rulers blatantly disregarded what the people of West Papua wanted and were determined to expand their own sphere of influence, even against the wishes of their allies.

By 1962 it became clear that the US and Britain would support Indonesian annexation.

The US was desperate to bring Indonesia into the anti-communist axis and use it as a bulwark against China. As racist US officials said in a National Security Council document: “preventing a communist Indonesia was much more important than who got control of a few thousand square miles of cannibal land”.

Despite Australia’s failure, the episode showed how the Australian ruling class is always concerned to push its own particular imperialist interests.

Their rejection over West Papua caused disappointment among Australia’s rulers and was a factor in Australian involvement in the Vietnam War.

The 1950s and 1960s saw large swathes of the region torn apart by imperialist rivalries and suppression of independence movements. The Malayan Emergency saw Australian troops join British forces to suppress Malaysian pro-independence forces led by communists. The US refused to commit troops.

Australia’s rulers became concerned to ensure the US would place its military between Australia and perceived threats to its North.

They were therefore keen to be seen as enthusiastic contributors to the US war in Vietnam, in the hope this would ensure a more favourable US response in future disputes in the region.

This desire to draw in the military might of the US to the region drove Australia’s gung-ho attitude over Vietnam.

Far from being a reluctant satellite following its master, Australia lobbied its great ally to step up its military intervention and enthusiastically offered Australian military support.

Australian policy was premised on the need to, “ensure that the United States did not waver in its commitment to South East Asia and to support the American presence politically, diplomatically and if necessary militarily”, as the Department of Foreign Affairs put it.

Australia pressured the US to step up its bombing campaign against North Vietnam. As early as January 1965 Australian Prime Minister Robert Menzies said Australia would support the US militarily if “pre-emptive landings” became necessary. Australia offered Australian troops in advance of any request. Menzies even said Australia was “looking for a way in, and not a way out”.

Both here, in Afghanistan after 2001 and in the Iraq War of 2003, Australia was determined to make sure it had troops on the ground alongside the US.

Although Australia’s calls for war were strident, its troop deployments were modest in comparison to the number committed by the US.

Nevertheless, the way Australia lobbied the US to step up its military involvement and preemptively offered its own troops shows that it is not just a compliant “US lackey” being dragged reluctantly into war. These were the self-interested moves of a middle power with its own imperialist goals.

The same desires to secure Australia’s “defence region” drive the belligerence towards China and Australia’s actions in the region today.

The ANZUS treaty has only ever been invoked once, by John Howard after 9/11 and this was mostly a stunt. Despite this, the US remains Australia’s main security patron in the region and the US alliance is still crucial for the Australian ruling class agenda of dominating the South Pacific.

In the last four years Trump introduced instability and confusion into the US system of alliances, much to the dismay of the US ruling class.

Biden is trying to patch this up and rebuild US leadership in overseeing the “rules-based order”. This is code for the economic and legal framework based on the military power of the US and its allies, and helps further entrench that power.

Australia has a huge stake in this order as it provides the framework in which it can throw its own weight around in the region. China’s goal of diluting US influence in the region is a challenge to this.

While the huge volume of trade with China is important for Australian capitalism, even more important is maintaining US hegemony in the region and the benefits it brings.

This is reflected in Morrison’s increasing belligerence toward China, citing the growing competition between the US and China as the defining issue of the day and calling on the G7 group of Western powers to take a harder stance against the growth of China’s influence.

The G7 meeting in June issued the strongest condemnation yet of China’s “non-market policies and practices”, much to Morrison’s delight.

Defence minister Peter Dutton and other Australian officials are beating the drums of war and have called for more US bases and troops in Australia.

All of these moves increase the prospect of war.

Australia’s rulers have proven time and again they will trample over people’s desires for peace, freedom and equality in their bid to expand their sphere of domination.

We need to end the US alliance and unite with ordinary people across the Asia Pacific to fight the drive to war and challenge the capitalist system that produces it.