Earth’s climate on edge of the abyss, warns IPCC report 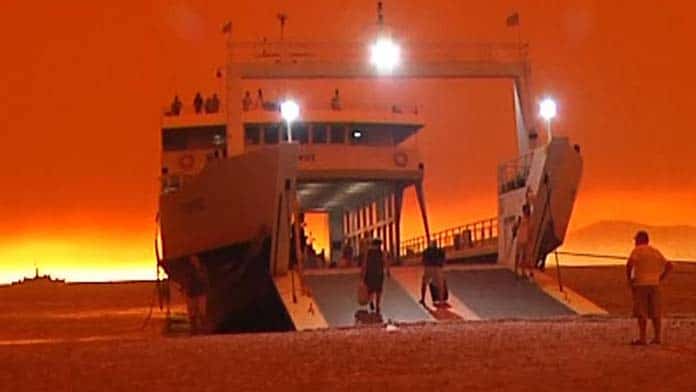 The new IPCC report is a drastic warning to the world to avoid uncontrollable heating.

The limit of 1.5 degrees of warming, accepted as a goal at the global climate summit in Paris, is just ten years away based on our current trajectory, it said.

This is ten years sooner than the last Intergovernmental Panel on Climate Change (IPCC) report estimated in 2018.

The report signalled a “code red for humanity”, according to UN Secretary-General Antonio Guterres. “This report must sound a death knell for coal and fossil fuels, before they destroy our planet,” he said.

The level of carbon dioxide in the atmosphere is now higher than at any time in at least two million years.

The report came amid a backdrop of record temperatures, bushfires and flooding across much of the world, disasters whose frequency and severity it warned would increase. The world has already warmed 1.1 degrees Celsius, it said, with temperatures in Australia already up 1.4 degrees.

Scott Morrison’s response was a disgrace. All he had to offer was more excuses for his refusal to act.

First he tried to shift the blame onto developing countries, saying they account for “two thirds of global emissions, and those emissions are rising”, and that China’s emissions were higher than anyone’s.

Rich countries like Australia should be offering aid funding to help them transition.But Morrison wants to do nothing.

Then he lied that “Australia was doing its part” to solve the problem. But the government’s target of 26-28 per cent emissions reduction by 2030 is far short of the 75 per cent the Climate Council says is needed from rich countries to keep warming to safe levels.

Finally he spread fear about climate action as a threat to jobs and regional communities. This is a continuation of the Coalition’s cynical support for jobs in coal and the Adani mine that it used to win votes in regional areas like the Hunter and central Queensland at the last election.

Morrison described climate action as a “burden” for regional areas, stressed “the implications and the costs” of plans to cut emissions and said he was aware of people’s “anxieties”.

The concerns about jobs are real. But instead of promising to fund the transition packages and alternative jobs in renewable energy and climate action that are possible, Morrison wants to keep burning coal and gas as long as it’s profitable.

He wants to expand fossil fuel extraction, funding efforts to open new gas fields at Narrabri in NSW and in the Beetaloo Basic in the NT. The Beetaloo alone would produce enough gas to increase Australia’s emissions by 20 per cent.

Morrison is even putting up $600 million of taxpayers’ money for a new gas power plant at Kurri Kurri in the Hunter as part of his “gas-fired recovery” plan—saying fossil fuel projects will bring jobs.

To win serious action, the climate movement has to put the fight for workers’ jobs and public investment at the centre of its demands. The support for renewable energy of unions like the ETU and MUA, such as for building offshore wind projects, is an important opening.

The crisis we face is squarely a product of capitalism.

Other world leaders are now talking about more serious targets, as another major climate summit approaches in Glasgow in November. But they have continually failed. Since 1990, when the first IPCC report was prepared, the world has released almost half of the carbon dioxide emitted since 1750.

This is because governments have put the profits of big companies before the future of the planet.

Fossil fuels are still enormously profitable. Despite big falls in 2020 due to the pandemic, Australian gas exports were still worth $33 billion in the last year for the big mining companies.

Just 100 companies worldwide have been responsible for 71 per cent of global emissions between 1998 and 2015.

Fossil fuels are structured into almost every part of the capitalist economy, from fabrics to food production, transport, packaging and manufacturing.

The costs of the transition to zero carbon threaten the profits of many existing industries.

The urgency of the situation means some people advocate lifestyle change as a solution. A leak from another forthcoming IPCC report in August called for eating less meat, and changing the “consumption patterns of higher income consumers”.

But the scale of the problem means that individual lifestyle change cannot solve the problem. We need a mass climate movement that can mobilise the power of organised workers to force change.