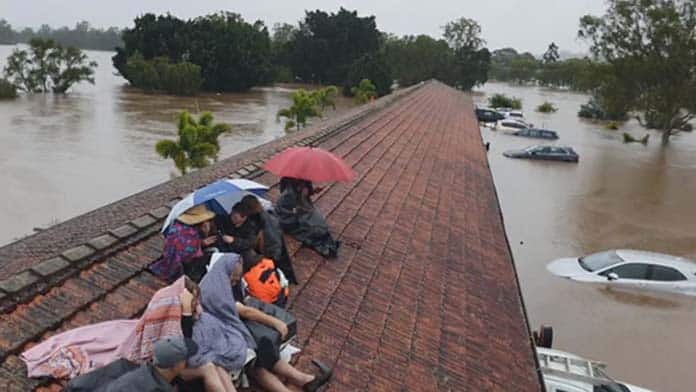 The massive floods that have hit Queensland and NSW show that climate change is a deadly threat.

With 21 dead to date, they are also a reminder that we need urgent action to reduce global heating and prevent runaway climate change.

Sydney has become the latest hit, following two weeks of heavy rains, with 50,000 told to evacuate and areas of Manly and western Sydney flooded.

Lismore in northern NSW has experienced some of the worst severe flash flooding, with hundreds of people stuck on their roofs with nowhere to go. One of the worst floods recorded in Lismore in recent memory was in 1974, with floods at 12.5 metres. In the current flood, water reached 14.4 metres. This is the impact of climate change. Homes are destroyed and lives are at risk.

Incoming Greens MP from Lismore Sue Higginson wrote, “If you had a flood plan—which everyone on flood-prone land does, especially since 2017—it was meaningless. We have the 1974 flood imprinted in our cultural fibre. It was the biggest flood. There are markers on power poles all round town. These are the floods of the past. They are not the floods of today, the floods of climate change.”

The government response across northern NSW left people to fend for themselves, with rescue efforts depended on locals using their own boats to go from house to house. Local John Vanderstok explained to The Guardian, “The emergency services are around but I’d say the locals outnumber them 20 to one, anyone who has a boat is just out there trying to save anyone they can.”

Vincent Marychurch told Nine News he rescued around 50 people in his local area, recalling there were “blood-curdling screams, ‘get me, my wife, kids’. I had to pick and choose which ones were dying first. And we were the only boat there”.

Intense flooding has also occurred in Queensland, particularly around Brisbane. Around 50,000 homes in and around Brisbane were left without power and 18,000 homes flooded. A record breaking 790 millimetres of rain was reported in one week.

Queensland Fire and Emergency Services reported that they received over 100 requests for help every hour. An emergency services officer who was called to help a family stuck on their roof had their vehicle swept away. Due to this, the trapped family in need of assistance lost their lives.

Heavy rainfalls occur every few years in NSW and Queensland as a result of the weather cycle called La Nina. This cycle occurs when warming of the Pacific Ocean and strong winds lead to extreme weather conditions. But climate change has caused the average rainfall during La Nina to increase by 22 per cent, causing severe floods.

As the atmosphere gets warmer, it holds more moisture. For every 1 degree of warming, it can hold 7 per cent more water.

We are in a climate emergency. Rainfall and floods are continuing to worsen as the years pass. We saw record breaking and devastating fires in 2019. These are the lived impacts of climate change. Ecosystems are displaced or destroyed, emergency services are stretched thin, homes and communities are damaged and lives are lost.

Last week the Intergovernmental Panel on Climate Change (IPCC) released its updated assessment of the existing and future impacts of climate change. Australia will be one of the developed countries worst affected, with irreversible loss of coral reefs, loss of alpine species, collapse of forests, rise in severe fires, increase in heatwaves and sea-level rise.

We cannot adapt to these conditions. Ecosystems cannot simply regenerate after such devastating loss and destruction. There will be more and more extreme weather events.

These conditions have been predicted by scientists for decades. Yet the Morrison government has made no significant efforts to address this. Instead, Morrison boasts about his “gas-fired recovery”, with plans to build a gas-fired power plant in Kurri Kurri at a cost of $600 million.

He is also supporting Santos’ Narrabri gas project, which will see 850 gas wells drilled on Indigenous land and result in 127 million tonnes of greenhouse gas emissions. Such fossil fuel projects not only contribute to the climate crisis but decimate Indigenous land.

It is our government that has set the path for climate crisis and we cannot look to them to get us out of this. If we do not act, they will continue to profit from land destruction and climate catastrophe.

It is workers, students and First Nations peoples, not politicians, who can secure a green future. We must unite and fight against our government’s climate crimes. We collectively hold the power to force politicians and corporate giants like Santos out, and transition to renewable energy.

School Strike for Climate has organised another Climate Strike on 25 March.

This is a chance to fight for climate justice, help drive Morrison out, and fight for 100 per cent renewable energy and land rights. This is how we can secure a future for our environment and our communities.