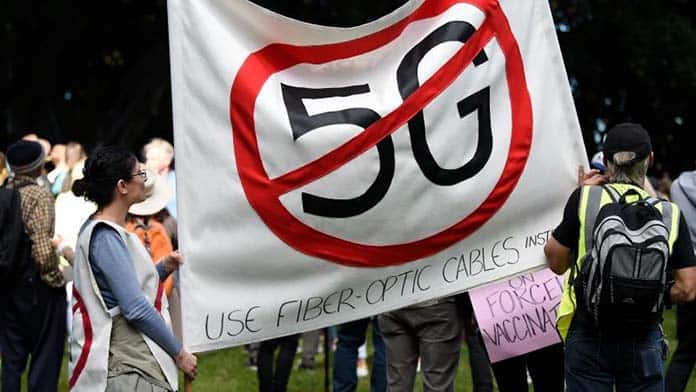 Recent anti-lockdown protests have given voice to a range of conspiracy theories—the belief that secret networks of powerful individuals rule the world.

One theory is that 5G mobile network towers are responsible for spreading Covid-19 by producing radiation that weakens our immune system. Another version is that Covid-19 is a hoax intended to cover up deaths attributed to the virus but caused by 5G radiation. And to force people to take vaccines that include tracking microchips. There is no evidence to support these claims. But there are deeper problems with conspiracy theories than a lack of evidence.

Conspiracy theories are disempowering because they reinforce the idea that those who control our world are so powerful they cannot be challenged. Many conspiracy theories reinforce divisions in society and reflect the toxic ideas of those who are responsible for injustice and crises. US president Donald Trump has repeatedly referred to Covid-19 as the “Chinese virus” and pushed the theory it was manufactured in a Wuhan laboratory, again without evidence. All this suits our rulers because it deflects attention from struggle against them.

Despite these failings, it is not difficult to understand why some people believe in conspiracy theories. People do not believe the media—and with good reason. Politicians and bosses pick and choose what information they release to suit their agenda. Trust in official sources of information has declined to record lows. And as neoliberalism has savaged living standards, governments have increasingly relied upon repression to maintain control with huge increases in spending on policing and surveillance.

So an element of truth lays at the heart of many conspiracy theories—our rulers do want to control society and they act in secretive and brutal ways to do it. Another factor that draws some people to conspiracy theories is the way society is organised.

Much official decision making is not democratic. Unelected bosses, government bureaucrats, generals, and judges make many of the key decisions in society. The majority of people experience life as a series of events over which they have little or no control.

Repeated financial crises have decimated economies and destroyed livelihoods. Millions of people are malnourished alongside record food production. Millions more have been consigned to poverty as inequality has increased. Climate chaos and war have forced people to become refugees in record numbers.

Because these are monstrous crimes, some people conclude they must be the result of monstrous plots. One hundred and fifty years ago Karl Marx agreed you have to look beyond the surface appearance of things to understand their causes. But Marx looked beyond particular governments and powerful individuals to how the whole of society is organised.

Marx pointed out that around 10,000 years ago, advances in agriculture saw many societies develop the ability to produce a surplus of food beyond their daily requirements. These societies divided into classes as a result—with a class of people labouring to produce the surplus and a ruling class controlling its storage and distribution.

From the beginning there was struggle between the classes—over the conditions of production and the equity of distribution. Marx identified class struggle as key to understanding the history of economics, politics, and ideology in society and how these change over time. As Marx put it “The history of all hitherto existing society is the history of class struggles”.

Marx also pointed out that during the fifteenth and sixteenth centuries, further advances in technology allowed production to be organised on a much larger scale. Production was increasingly for sale on the market for profit. And profits were reinvested by bosses to expand production in pursuit of further profits.

This capitalist mode of production came to dominate everywhere as firms and states competed with each other. Economic competition soon became military competition, imperialism, and war. The capitalist ruling class was united in their fear of, and contempt for, the working class labouring to produce their wealth. But they were also divided against each other in competition for resources and markets. As Marx put it “Capital exists as many capitals”.

Marx’s analysis of class and capitalism has enormous explanatory power. Rather than being controlled by a tight-knit all powerful minority, the capitalist system has its own laws of motion and social structures that shape society. Investment is governed by the blind panic of the market and the drive for profits. Rather than by democratic planning to meet human need.

The capitalist ruling class is trapped by the system that produced it. They can recognise the threat to their system and to the world posed by nuclear war, species extinction, and climate change. But they are unable to break from the logic of competition and profit to coordinate a response.

But Marx’s analysis also revealed how the system can be fought. Because capitalism relies upon the labour of the working class whom it must divide in order to rule, workers have a common interest in uniting to overthrow capitalism and replacing it with socialism—a society in which decision making is democratic and therefore in the interests of the majority.