Inspired by Thatcher, Liberals want workers to pay for the COVID crisis 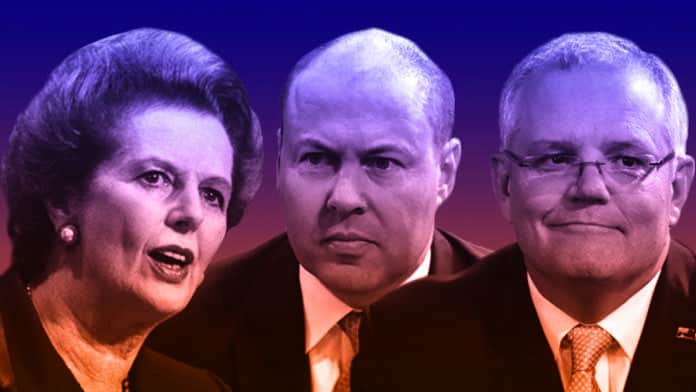 The Liberals want workers to pay for economic recovery through attacks on workplace rights and poverty level payments for the unemployed.

The government is cutting back both JobKeeper and JobSeeker payments after September, despite the renewed lockdown in Melbourne showing the COVID-19 crisis is far from over.

Both payments will continue for another six months with a cut of $300 each. JobKeeper will drop below the minimum wage to $1200 a fortnight.

The payment has flowed to elite private schools and hundreds of priests across the major churches, despite their millions in assets. Yet the government still refuses to allow university staff, casual workers and anyone on a migrant work visa to access it, imposing thousands of job losses.

JobSeeker will be cut to $815 a fortnight, despite Treasurer Josh Frydenberg’s admission that unemployment is set to rise further to 9.25 per cent by December. The Australia Institute estimates this will throw 370,000 people into poverty.

Now Josh Frydenberg has announced that he wants these changes to continue after September—even if a company no longer needs JobKeeper.

Labor and the unions have opposed the move, with ACTU president Michele O’Neil saying, “there is no justification whatsoever for changing workers’ rights for business that are no longer struggling”.

Bosses want workers even more casualised and disposable, so they can cut shifts and move workers around their business in order to maximise profits.

Already there are calls from employer groups such as the National Retail Association to extend the powers to all employers. This all has to be stopped.

Further attacks on workplace rights are coming. Frydenberg has declared that, “for the [industrial relations] system to deliver more jobs, it will need to evolve”.

Industrial Relations Minister Christian Porter’s five working groups examining changes to workplace laws are due to wrap up in September. While the ACTU is involved in the process, the government has made it clear that it will press ahead with changes anyway if the unions don’t agree.

There is no reason that reviving the economy has to come at the expense of wages, conditions, and workers’ rights.

Record low interest rates mean the government could borrow money on a much larger scale to fund jobs. The government has already committed to $289 billion of measures.

But Josh Frydenberg is still clinging to the neo-liberal dogma against budget deficits, declaring he was inspired by Margaret Thatcher and Ronald Reagan and that the debt was already “eye-watering”.

But the scale of the economic slump is also the biggest since the 1930s, with the economic decline this year estimated at 60 times that of the 2007-8 crisis globally.

Even Reserve Bank Governor Philip Lowe has argued that, “debt across all levels of government in Australia, relative to the size of the economy, is much lower than in many other countries”.

There could be a big increase immediately in the aged care workforce to ensure those most of risk from the coronavirus are protected. Ending casualisation and understaffing would allow any worker with the slightest symptoms to stay home, reducing the risk of the virus getting into aged care homes. In Victoria, the AMA is warning that aged care is already on the brink of collapse with so many workers infected with the virus or required to self-isolate.

And there are hundreds of thousands of jobs that could be created in tackling climate change, from building renewable energy generation to retrofitting buildings, switching to public transport and improving land management.

Making sure workers do not pay for this crisis will require a fight. Workers at Woolworths’ distribution centre in Wyong in NSW are showing the way, striking for 24 hours to demand wage parity with other Woolworths’ centres, only to be faced with a three day lockout from the company.

The CFMEU is NSW is also pushing for a 5 per cent pay increase, after securing pay increases, albeit lower than in the previous years, in Victoria.

It is crucial we don’t accept the way coronavirus restrictions are being used to shut down protests.

The continued Black Lives Matter rallies against deaths in custody have shown that large numbers can still be mobilised on the streets.

We have to organise, demonstrate and strike to demand that the government, the bosses and the rich pay for the crisis.