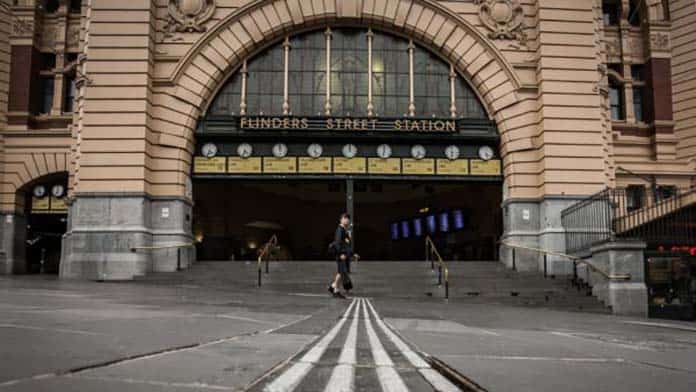 Melbourne has halted the spread of COVID-19, with over two weeks of zero cases. There is now talk of Melbourne’s lockdown as a model for the rest of the world.

But this is the wrong lesson. The lockdown would never have been necessary if adequate health measures, like contact tracing, had been put in place beforehand—and if hotel quarantine hadn’t been privatised and reliant on casual workers.

The five kilometre travel restrictions and nightly curfew had no health justification or impact. They were part of a draconian policing effort designed to put the blame for the second wave onto individuals breaching restrictions. By the end of August almost 20,000 fines had been issued.

This helped shift attention away from the state health department failures, and the more far-reaching measures needed to address casualisation, workplace safety and low wages.

Melbourne’s second wave was a product of a neo-liberalism. It began in the privatised hotel quarantine system, ripped through the privatised aged care system, with its casualised workforce that moved between homes, and through poorly paid, unsafe workplaces like abattoirs.

These problems have not been solved. There are now some restrictions on staff movement between aged care homes, but there are no nurse-to-patient ratios except in state government-run aged care. Nor is there any move to nationalise the sector.

Nine months after the pandemic began, there are still persistent failures in hospital safety. A new cluster emerged from the Box Hill hospital in October, after the failure to fit-test N95 high protection masks in COVID wards, and allowing staff to work across different wards. Sarah Whitelaw from the doctors’ association in Victoria told The New Daily there was still “a really widespread problem” in hospitals complying with health department recommendations.

Casual and insecure workers were often unable to stay home if they got sick. The Brotherhood of St Lawrence found that disadvantaged Victorians are twice as unlikely to be able to quarantine. Around 44 per cent of workers in its employment program had no sick leave. Many were not aware of the government’s COVID-19 testing and quarantine payments due to messaging or translation problems.

Ongoing problems with contact tracing were a key reason the Andrews government was nervous about lifting the lockdown. It was only in September, two months after the second wave began, that it announced plans to fully digitise contact tracing, which was still based on pen, paper and fax machines.

Its plans to replicate the NSW system of local suburban contact tracing centres were still not fully in place even when the lockdown was lifted in November.

Epidemiology Chair at Deakin University, Professor Catherine Bennett, told GP News that such a “community-led approach for contact tracing” was crucial to providing an, “understanding of local, social, and cultural factors that may facilitate spread or affect how people understand self-isolation and what’s being asked of them.”

It would also allow local GPs to be involved in tracing, as an essential trusted contact, especially for culturally and linguistically diverse communities.

The rollout of testing, a time critical element of contact tracing, is still not up to scratch. When an outbreak occurred in Shepparton in October, residents either had to endure a six hour wait for a test, or come back another day.

The strength of testing and tracing measures will be crucial to avoiding a third lockdown. As new community infections in both South Australia and New Zealand in November show, it is very difficult to keep the virus out completely.

The Victorian government has begun a welcome testing blitz in Victorian suburbs hardest hit by coronavirus infections, aiming to test 500,000 people. They are also launching surveillance testing, with 25 per cent of workers in high-risk workplaces like abattoirs to be tested weekly.

But there are still big gaps. Epidemiologist Catherine Bennett told The Saturday Paper the program is not being rolled out widely enough, especially into cleaning, aged care and hospitals.

It was a sign of government failure that Melbourne spent over half of 2020 in lockdown. We need to fight for the measures to ensure that the government does not resort to it again—such as regular workplace testing, government run health and aged care, and permanent jobs with pandemic leave for all.