Australian neo-colonialism and the climate crisis in the Pacific 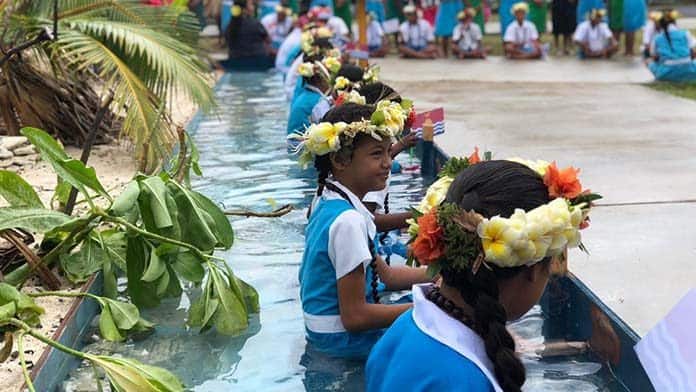 The Australian government’s performance at the Pacific Island Forum (PIF) in August laid bare a ruthless agenda of regional domination and profit making at all costs.

As Pacific Island leaders pleaded for strong action on climate change, Scott Morrison and Australian negotiators moved to ensure all references to stopping the expansion of the coal industry were removed from the forum’s communique.

Meanwhile back in Australia, at a business forum in Wagga Wagga, Deputy Prime Minister Michael McCormack complained about, “people in those sorts of countries pointing the finger at Australia and saying we should be shutting down all our resources sector so that, you know, they will continue to survive”.

“They will continue to survive,” he said, because of “large aid assistance from Australia” and “because many of their workers come here and pick our fruit”.

These disgraceful comments were slammed as “neo-colonial” by Enele Sopoaga, Prime Minister of Tuvalu who was hosting the PIF.

Australia’s response to the climate crisis is grounded in more than 150 years of Australian imperialism in the region. Australia is manouvering both to ensure exclusive military domination, while also taking new opportunities for exploitation of the labour of Pacific Islanders on Australian corporate farms.

The Australian Defence White Paper in 2016 argued that climate change will drive “instability” and “state fragility” as Pacific peoples suffer from large-scale displacement and food shortages.

Speaking to 3CR radio in Melbourne in the lead up to the PIF, Pelenise Alofa, from the Kiribati Climate Action Network, said cyclones and king tides in recent years had caused unprecedented suffering on her islands, while “in other places like the Solomon Islands, PNG, Tuvalu and Fiji, people are already moving” as sea levels rise.

But rather than act to cut carbon emissions, Australia is moving to lead “security” responses to potential social dislocation, to ensure corporate interests are protected first and foremost, and to check the rising influence of China in the region.

In 2017, Defence was at the centre of the launch of a new “whole of government” approach called “Pacific Step Up”, with policy documents pledging to “engage with the Pacific with greater intensity and ambition”. Australia is the largest provider of foreign aid to the region, and this funding is increasingly being concentrated in grants to police and the military, including the gifting of 19 new patrol boats to Pacific states.

The Federal Police and ADF are integrating their command structures with Pacific states and a new “Australia Pacific Security College” established with the Australian National University (ANU) will be part of a broader push to lead Australian training efforts.

Fijian Prime Minister Frank Bainimarama said at the PIF that Australia’s “colonial attitude” would push his country closer to China. But despite these threats, in late 2018, Australia successfully secured its position as sole funder of Fiji’s new Black Rock military base, which will train military personnel from across the Pacific, against a Chinese bid. Australia is also building a new base on PNG’s Manus Island.

Also central to “Pacific Step-Up” is the creation of a new visa category for Pacific workers to come to Australia for three years, so they can earn money to send back home. This would complement an existing Seasonal Workers Program, which provides a six-month visa to work in the horticultural industry.

While McCormack presented this as some kind of act of charity, in reality Pacific workers provide the backbone of a highly profitable industry and are often exploited in terrible conditions.

Comparisons can be drawn with the “blackbirding” trade, which saw indentured labourers brought from the islands to cut sugar cane on Australian plantations in the 19th century. Workers today are similarly tied to a single employer and face deportation if they leave.

Alison Rahill, from the Catholic Diocese of Sydney Anti-Slavery Taskforce, says there are “definitely slavery-like conditions” being faced by many Pacific workers.

Workers are routinely paid below award wages and work in unsafe conditions. The program has been marred by 14 deaths of Pacific workers in the last six years.

Climate justice for the Pacific requires a rapid decarbonisation of the Australian economy and a demilitarisation of the Australian response to the unfolding climate crisis. Aid is urgently needed for Pacific-led climate mitigation and disaster response teams. And the people of the Pacific need unlimited rights to work in Australia and to change employers or return home whenever they need.

The “Pacific Climate Warriors”, a growing group of youth from the Pacific diaspora, will be at the head of the 20 September global climate strike in Sydney, marching under the banner “we are not drowning—we are fighting”.