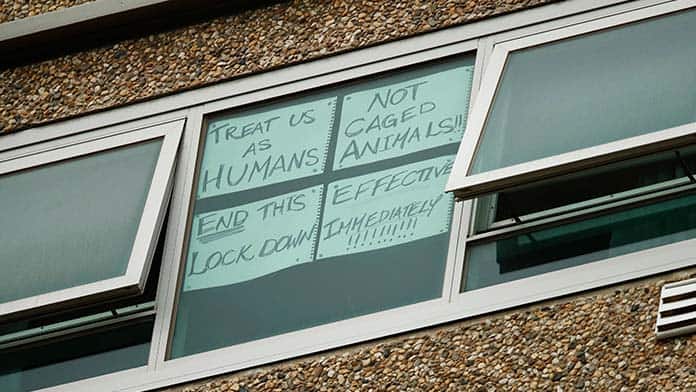 The lockdown imposed on public housing residents in Melbourne is a piece of racist authoritarianism that has to end.

The announcement that the whole of Melbourne will go back into a “stage three” lockdown makes it even more unnecessary.

The “hard lockdown” of nine public housing towers in Kensington and North Melbourne was imposed without warning. Dozens of police had already arrived before any announcement was made to the residents. Those who attempted to get to the shops for urgent supplies discovered they were already barred from leaving.

Residents are not allowed out for any reason. They have been left without food, without baby formula, without medicine such as insulin for diabetes, cut off from work and income, and now barred from hospitals, with all health issues to be addressed by an inadequate makeshift hospital on tower grounds.

The government says it is supplying food but this has been late, poor quality, and ignored dietary and cultural requirements. Frozen food has been left in corridors to thaw, and residents have gone hungry.

“We’re treated like criminals pretty much, and they’re only targeting the flats”, resident Tekeste Hailu told the ABC. “Mostly the people that live in the flats are from migrant backgrounds. I just feel like, why only us?”

Just like Prime Minister Scott Morrison’s denial of JobKeeper payments to millions of casual and migrant workers, Premier Andrews’ hard lockdown has made it clear that we are not all in this together.

Surrounding areas received notice that lockdown restrictions would not begin until midnight following the announcement—and are still allowed out for grocery shopping, work and school.

But in the towers, over 500 police have been deployed, with officers on every floor of the working class housing blocks to lock down 3000 residents.

As of Tuesday, 69 cases of Covid-19 have been recorded in the nine towers. But the government has admitted that two of the towers were locked down despite having no cases, exposing further the discriminatory nature of the lockdown.

This is racist policing of poverty. The majority of the residents have migrant or refugee backgrounds, and police have a history of racial profiling, violence, and harassment against residents of the public housing estates. The Black Lives Matter protests have brought to light the daily police brutality against Indigenous and marginalised communities. The lockdown will bring more of this to the flats.

A police response to the health crisis is also counter-productive. Victoria has had three times the number of fines for breaching health regulations of any other state, but this hasn’t stopped a second wave of Covid-19. And just like the security guards at the quarantine hotels, police have been given threadbare health training. The Andrews government has put $2 billion into building a new private prison, and increased funding to the police by $3 billion. But what is needed is hundreds of health workers, nurses, social workers, and cleaners, not more police.

Premier Daniel Andrews initially said the lockdown would last five days. He now says it will end when everyone has been tested, but with only 400 out of 3000 residents tested on Monday that could still be days away.

Australia’s acting Chief Medical Officer, Paul Kelly, backed the lockdown, calling the towers “vertical cruise ships”. But the hard lockdown risks creating exactly the cruise-like conditions that it claims to be addressing. Residents are trapped at close quarters with no escape. Those with Covid-19 are not being removed to isolation hotels, but kept in conditions where the virus is likely to continue to circulate just as it did on the cruise ships. There is no escape for elderly or immunocompromised residents.

Just as cramped conditions for migrant workers led to a second wave of Covid-19 in Singapore, and the pandemic has spread disproportionately through black communities in the US, racism and inequality here increases the risk of Covid-19.

Residents in public housing towers outside the lockdown zone have called for urgent measures to prevent Covid-19 outbreaks in Collingwood, Fitzroy and Richmond. They have called for mass testing of all residents, removal of positive cases to isolation hotels and for hand sanitiser in every floor and laundry and lift.

The health of the tenants, and all of us, has been threatened by the failure of the Andrews government to take precautionary health measures for the safety of public housing tenants.

Instead of imposing a lockdown in unsafe, crowded housing, the government should fund accommodation for residents in safe conditions.

Adequate testing, along with contact tracing and quarantine of confirmed cases of the virus, would make lockdowns unnecessary.

Victoria’s second wave of Covid-19 is the result of failures at the government-run quarantine hotels. Daniel Andrews has admitted that genomic evidence from coronavirus cases in late May and early June points to hotel security guards as the source.

This is the result of outsourcing the operation of the hotels to private security companies. Some companies even subcontracted the work to other security firms.

Security guards were given as little as five minutes training on the health and PPE measures necessary in the hotels, one guard told Nine’s Today show. They were allowed to share lifts with guests in quarantine while escorting them outside for exercise, given inadequate PPE and rostered on for 12-hour shifts.

It has also emerged that MSS Security, which had the contract for the Stamford Plaza hotel, where an outbreak among security guards has grown to 42 cases, also provided security for the North Melbourne and Flemington towers. Industry insiders have claimed that subcontractors for MSS Security worked at both the quarantine hotel and the public contract towers.

This should never have happened. Quarantine facilities should be run directly by government health workers, employed on secure conditions. But rather than accept responsibility, Daniel Andrews’ government has blamed the security guards.

This is part of the government’s offensive designed to shift blame for the spread of the virus from its own failures onto ordinary people. Daniel Andrews claimed the reason a “stage three lockdown” had to be reintroduced across Melbourne was a “creeping complacency” of people disregarding social distancing.  But it is Andrews’ lack of proper preparations that is to blame.

Much of the left from Victorian Trades Hall to VCOSS and The Greens have supported some form of lockdown of the public housing as a “health measure”, while opposing the way it has been implemented. But the lockdown needs to be opposed outright. Responding by donating money and food to residents will not solve the problems of over-policing and unsafe, crowded conditions that the lockdown has created.

Stand Together Against Racism in Melbourne has produced an important sign on statement calling for a complete end to the lockdown and racist policing. So far over 350 individuals and organisations have signed on. This can be a springboard for the mobilisations and protests that will be needed to defend the public housing tenants and force the police off the estates.