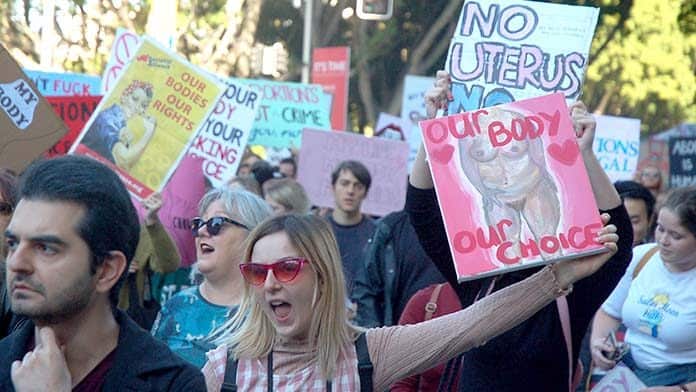 Until late August it seemed as though legislation to decriminalise abortion would sail through the NSW parliament.

After passing the lower house 59 votes to 31, the Reproductive Healthcare Reform Bill looked set to pass easily in the upper house.

But in an effort to appease the bigots in her party, Premier Gladys Berejiklian delayed the vote.

Conservatives, including Liberal MPs Tanya Davies and Kevin Conolly and One Nation NSW leader Mark Latham, are now pushing hard for a ban on “gender selection” abortions, despite medical groups saying the practice is not an issue in NSW.

Other amendments include mandatory counselling for women seeking an abortion and the removal of the requirement for doctors who oppose abortion to refer patients elsewhere.

Davies and Conolly have threatened to leave the Liberal Party, pushing the Coalition into a minority government, if Berejiklian does not support the amendments.

But in a sign of their isolation, they failed to win the support of the NSW Liberal Party conference on 7 September.

If the amendments pass, the bill would have to go through the lower house again, setting the process back by months.

But this amendment is a clear attempt to smear women who choose to have an abortion. The decision over whether to do so should lie with the woman involved, whatever her reasons for doing so.

All of the amendments should be opposed by pro-choice advocates and the bill passed in its original form.

Berejiklian has also indicated she will introduce a new version of “Zoe’s law” recognising harm to a foetus as a criminal offence. This would further stigmatise abortion, by setting a threshold, say at 20 weeks, after which a foetus would be considered a legal person.

While a consistent majority of people in Australia support the right to choose—around 80 per cent—the delay has emboldened anti-choice bigots, who have mobilised against the bill.

On the day of the delay the words “choose life” were written in the sky and thousands of anti-choice activists rallied in Martin Place. The protest was addressed by NSW Minister for Finance, Damien Tudehope.

Federal Nationals MP Barnaby Joyce has weighed in heavily on the debate, and even set up a robo-call urging NSW residents to reject the bill.

Pro-choice campaigners reliance on parliamentary manoeuvres to pass the bill, without a serious public campaign to prepare the ground, has given the right an opening to organise.

The weekend rally on 14 September is a good step towards building that campaign. In the context of a global offensive on reproductive rights, particularly in the US, Italy and Brazil, pro-choice activists need to mobilise to beat back the bigots and win the unrestricted right to choose.

Abortion has now been “decriminalised” in most states, yet criminal law still covers certain procedures and in all states there are legislated time limits within which a woman can request an abortion. After this time two doctors are required to give permission; in Victoria after 24 weeks, Queensland after 22 weeks, Tasmania after 16 weeks and the Northern Territory after 14 weeks.

The NSW Bill would set a limit of 22 weeks.

The ACT is the only jurisdiction where abortion has been removed from the criminal code completely, showing that abortion can be regulated under health regulations and available at the request of the woman concerned without restriction.

While around 95 per cent of abortions happen within 14 weeks, late term abortion remains necessary for a variety of reasons.

In most places abortions are provided by private clinics and are often expensive. The average cost of a surgical abortion in NSW is $460. In WA it is $795. Medicare covers just one fifth of the cost.

Regional areas are poorly serviced, forcing women to travel long distances and incurring even greater costs. Women in Tasmania, which now has no abortion clinics, must travel to the mainland to access the procedure.

All those capable of becoming pregnant—women, girls, non-binary and trans people—should have access to free, safe and accessible abortion on demand. Australia still does not have this right.

By Caitlin Doyle and Judy McVey