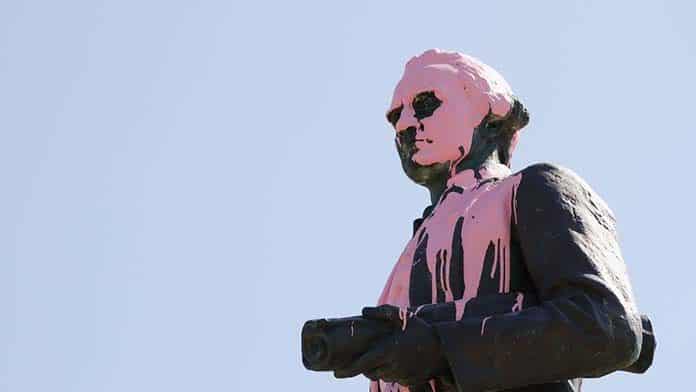 The 250th anniversary of Cook’s landing in April will see him defended as a great navigator and explorer. But he was part of the imperialist scramble to colonise the world, writes James Supple

Captain Cook was as “an enlightened man for his generation and his time”, according to Prime Minister Scott Morrison, someone who sought to understand the Indigenous people he encountered and made great contributions to science and discovery.

Morrison has devoted $48.7 million to celebrating him as part of promoting the story of European colonial achievement.

He wants Australians to “rediscover” Cook because, he says, “he gets a bit of a bad show from some of those who like to sort of talk down our history”.

This is designed to reinforce nationalist pride about the history of European settlement in Australia—another front in the History Wars begun by Prime Minister John Howard.

Far from some detached, scientific observer, Cook was a career officer in the Royal Navy, the key part of the British war machine of his day. He cut his teeth in the war against France, fighting in modern day Canada.

Cook’s voyages were part of the imperialist scramble between European powers to colonise and exploit new areas of the world—in a game of competition over trade, plunder and conquest.

France and Spain were Britain’s two most important rivals of his day. At the time of Cook’s voyage, Spain still controlled South America, the Philippines and a number of islands in the north Pacific. It claimed the Pacific Ocean as its own and ordered Cook’s arrest if his ship stopped in any Spanish port.

In 1763 Britain defeated the combined might of France and Spain in the Seven Years’ War, seizing French colonies in Canada, and their territories in India.

Britain ran one of the most brutal empires the world had ever seen.

For a century a British corporation, the East India Company, ran India directly with its own private army.

It bled the country dry in pursuit of profit, destroying its industries and forcing Indians into poverty to the point where one of its own administrators admitted that, “the bones of the cotton weavers were bleaching the plains of India”.

No product or pursuit was too vile. Britain sold thousands of pounds of opium into China each year, creating millions of addicts.

It later went to war for the right to continue the drug trade.

It was also busily shipping three million African slaves to the Caribbean and North America, working them to death to produce sugar and cotton.

Britain had established itself as the leading naval power in Europe, in an era when command of the seas was all important in securing overseas colonies and trade.

It turned next to the south Pacific, sending a series of expeditions in search of the rumoured southern continent.

The French followed them. In 1763 Louis Antoine de Bougainville began establishing a French colony on the Falkland Islands, near the tip of South America, as a base for exploring the Pacific.

Forced to abandon the scheme, he instead set sail on a voyage of discovery himself two years before Cook. He attempted to claim Tahiti for France, only to discover that British ships had visited it the year before.

Other French explorers followed, including Jean-François de Surville, who reached New Zealand just days after Cook had been there. In January 1788 La Perouse arrived to spy on the new British colony planned for Botany Bay.

There had been a long-held belief that a massive southern landmass lay waiting to be discovered in the Pacific, whose control might even tip the balance of power between the rival European states.

In 1756 Charles De Brosses, a French scholar, produced a book on the history of European voyages in the south Pacific, urging France towards further attempts at locating the continent, in order to prevent further British expansion.

Writing in 1770 on the basis of seized Spanish documents, the British East India Company’s Alexander Dalrymple speculated that the continent could be as large as Asia and contain civilisations like those discovered in South America. Trade with such a continent, “would be sufficient to maintain the power, dominion, and sovereignty of Britain, by employing all its manufacturers and ships”, he thought.

Cook’s first voyage in 1768 was officially a scientific expedition commissioned by the Royal Society to observe the transit of Venus across the sun.

But he was also given secret instructions by the Admiralty to search for the Great Southern Land, and to claim it for the British Empire.

This was the first of three voyages Cook led to the Pacific, definitively disproving the more fantastic myths about the southern continent, and sailing as far as the icy waters around Antarctica in the south, to Easter Island and Hawaii, and as far north as the Bering Strait off Alaska.

It was once claimed that Cook “discovered” Australia. Of course, Indigenous Australians were at least 60,000 years ahead of him.

Makassans, from modern day Indonesia, were also trading with Aboriginal people in northern Australia from at least 1720 and perhaps centuries earlier.

Cook was also far from the first European to set foot here. The Dutch first landed in Cape York in 1606, and later charted the west coast of Australia and Tasmania. He was not even the first Englishman, with pirate turned naval officer William Dampier shipwrecked off Western Australia in 1688.

Cook’s sole claim was to finding and mapping the east coast of Australia.

He did not hesitate to claim the land for Britain. Cook records that he held a little ceremony at Possession Island in the Torres Strait, hoisting the British flag in order to claim the entire east coast of Australia, as the first European to sight it.

Cook had followed a similar procedure in New Zealand, recording in his official journal that he had claimed the land, “in the name and for the use of his Majesty”.

Although he was told to win “the consent of the natives” for British possession Cook made no effort to do so.

In Australia, he shot at the first Indigenous people he saw. Cook fired at two Gweagal warriors at Botany Bay, injuring one of them, after they threw spears towards him as a warning not to come ashore.

Cook took the Gweagal shield and spears that they abandoned. They are still held today at the British Museum despite repeated requests for their return.

Cook was officially warned by the Royal Society that killing the Indigenous people of any lands he visited was a “crime of the highest nature” and instructed to “avoid the wanton use of firearms”.

There was an obvious hypocrisy in British authorities, responsible for genocidal killings in North America and elsewhere, claiming such moral high ground.

But these instructions also reflect the fact that Cook’s mission was to explore and chart the areas he visited, as well as investigate profitable opportunities for trade, not to conquer or invade them.

Often he did attempt to win local people over with gifts, and tried to understand their cultures. But he was also willing to use force to punish them and to assert European superiority.

When Maori showed him hostility on his first expedition, and attempted to grab weapons after efforts at trading broke down, Cook and his men shot at them.

In a month the expedition killed between nine and 13 Maori in a succession of encounters.

As many as four were shot when an effort to kidnap a party of Maori and take them aboard Cook’s ship went wrong.

At Tonga, Cook dealt with thefts on the part of the locals with vicious punishments. As academic and Cook biographer Nicholas Thomas explains, “Tongans were subjected to two, three and even six dozen lashes… the ears of some thieves were cut off, and one man’s arms were cut with crosses through to the bone, to mark him out permanently, and to horrify and deter others.”

On the Pacific island of Mo’orea, near Tahiti, Cook led a punitive expedition of 40 men who sacked the island in an effort to recover a single stolen goat.

They burnt down houses as well as elaborate war canoes that had special ceremonial importance and took months to construct.

One of Cook’s favourite tactics was to kidnap local chiefs or leaders, in an effort to force the population to return stolen goods.

In Hawaii, this led to his death on his third and final voyage in 1779. Cook arrived as the islanders were carrying out religious ceremonies that recalled a series of battles between historic chiefs.

When he returned to seek repairs, Cook seems to have intruded on celebrations of the ruling chief’s victory.

After he went ashore and attempted to take Hawaiian chief Kalani’opu’u hostage, a large crowd gathered. Cook’s shot into the crowd failed to subdue them, and he was set upon, and stabbed and clubbed to death.

Following the practice for powerful leaders, the locals then dismembered his body and baked it, in order to keep his bones.

This gave rise to a myth that Cook’s body was eaten.

In Hawaii, Cook came to be remembered for disrespecting religious ideas, introducing foreign diseases and helping destroy the local culture. For Indigenous Australians too, as historian and Worimi man John Maynard has written, “he represents white Australia in all of its guises including invasion, occupation, dispossession and the conducting of a symphony of violence”.

His role as a pioneer of colonisation turned him into a symbol of all that followed.