Eyewitness from LA: Burning rage engulfs the US in rebellion against racism 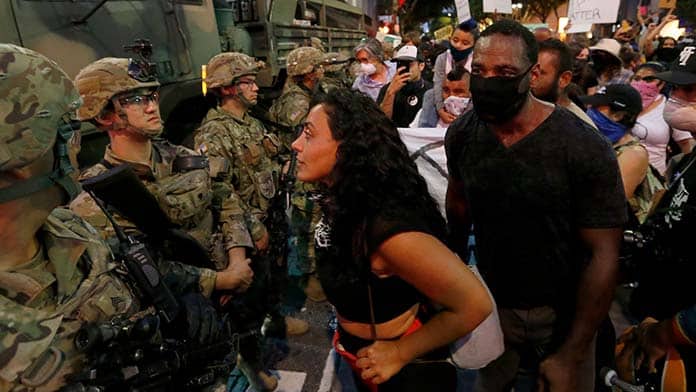 The scale of the rebellion in the US since the police murder of George Floyd in Minneapolis on 25 May is astonishing. The last few years have seen periodic protests by the Black Lives Matter movement following high profile police murders. But this rebellion is different. The combination of the public health crisis, with the pandemic killing people of colour at the highest rates, the economic misery many face due to lockdowns, and Trump’s catastrophic leadership have created a tinderbox which Floyd’s execution set aflame.

At the time of writing, protests have been raging across all 50 states for over two weeks. Where I live in Los Angeles there are actions every single day—from marches through downtown, to street sit-downs outside the mayor’s house, car caravans, family-friendly vigils in local neighbourhoods, and solidarity actions held by LGBT+ and immigrant organisations. It’s often hard to tell who has called each action or to hear any speakers, because the marches are so large and popular.

The police response has been brutal. There are daily images of tear gassed protestors—including children—and injuries from rubber bullets. Local politicians running city councils have imposed night-time curfews, sometimes at the last minute while protests are still taking place, in what many consider a coordinated attack on demonstrators.

Trump deployed the military to several cities including my own. The intersection outside my office was patrolled by soldiers and tanks rolled down busy thoroughfares for several days following a violent crack-down on protests in the Fairfax neighbourhood of LA. Yet people keep taking to the streets despite the risk of police violence—not to mention the risk of COVID-19.

The ruling class is attempting to divide the movement by differentiating between “peaceful” protests and “violent” ones. This is what prompted Trump’s declaration that Antifa is a terrorist organisation.

One particular object of their attack is looting and property damage. In a beautiful display of solidarity, several small businesses around the country that sustained damage during protests have spoken out, arguing that their smashed windows are nothing compared to the ongoing police racism in this country.

And the looting and property damage has often been politically targeted. In LA a great deal of the looting hit the luxury stores in Beverly Hills. Property damage has often been directed at police vehicles, kiosks, and stations—like the now famous image of the Minneapolis police station on fire. It seems the ruling class attempt to split the anti-racist resistance is not working: a whopping 54 per cent of people nationwide supported burning down the Minneapolis police precinct, according to one poll.

In any case, small-scale looting at demonstrations pales into insignificance next to the looting going on at the top of society. We are teetering on the edge of a massive economic crisis. People are losing their jobs, healthcare, houses, and standing in food lines. Yet by the middle of May billionaires in the US had increased their wealth by $434 billion since the beginning of the pandemic. And just days before the anti-racist rebellion erupted Congress handed billions to the banks and corporations in bailout money.

The most encouraging political development during the rebellion has been the growing support to defund the police. This demand was once the preserve of the revolutionary left, but is now the slogan of a mass movement.

There are important debates still to be had about what exactly defunding the police looks like, and how to go about abolishing the police when they are just one component of the larger violent and repressive apparatus of the capitalist state.

Sadly, Bernie Sanders, once a beacon of hope for many on the US left, is working against the demand to defund the police. In fact he has argued they need more money, including funding to give the cops higher pay.

The rebellion is raising huge questions about the Democrats. While many mainstream organisations and politicians are trying to use the revolt as a get-out-the-vote opportunity, this doesn’t have much sway among protestors.

People know that George Floyd was murdered in a Democratic state, in a Democratic city, by a cop who was funded by Democratic lawmakers. Where I live in LA, 54 per cent of the city’s budget goes toward the racist and killer police department, which is overseen by Democratic mayor Eric Garcetti. Across the country, Democrats have called in police to violently crush protests and sent in the National Guard. There are debates in the movement about how to respond to this. But there is also a growing understanding that there is no electoral solution to the vicious police racism that produces the routine murder of so many black people in the United States.