How war can lead to revolution 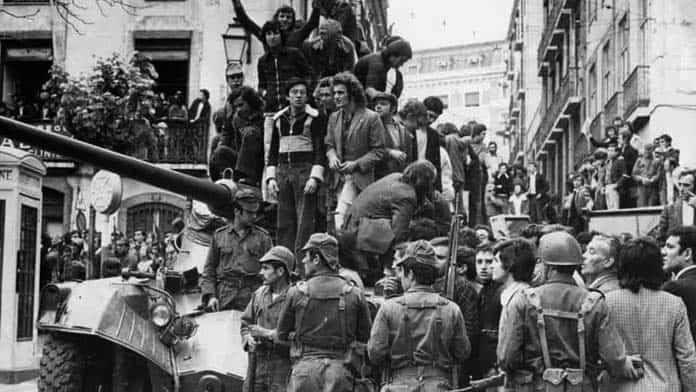 The horrors of war have produced numerous revolts at home—that have ended wars, toppled dictatorships and put a fight for radical change on the agenda, argues Tom Orsag

Putin’s war in Ukraine has produced a wave of anti-war demonstrations inside Russia, even in the face of vicious repression.

Even in the army, there have been reports of conscript soldiers surrendering or refusing to fight. One group of soldiers reportedly ran over their commander with a tank after he sent hundreds of them to die.

Wars in the past have been ended by mass protests and popular resistance.

Working class people, including soldiers and sailors, have risen up in mutiny, mass strikes and even revolution, forcing their own governments to end the insanity of industrial-scale slaughter and give up the war.

The most dramatic examples occurred during the First World War.

The outbreak of that war saw the workers’ movements across Europe silenced by the clamour of jingoism, with the class struggle forgotten as workers queued up to join the “adventure” of imperialist war.

Most of the socialist and Labor-type parties across Europe betrayed their promises to oppose war, backing the rulers of their own nations. Mass parties including the German Social Democratic Party, with over a million members, the French Socialist Party and the British Labour Party all swung behind the slaughter.

Only a tiny minority of socialists, most importantly the Bolsheviks in Russia, predicted that the imperialist war, by exacerbating the internal contradictions of capitalism, would lead to civil war between the classes.

The Russian revolutionary Lenin argued that socialists should not support their own ruling class but instead turn imperialism war into class war. This position on the inter-imperialist conflict was known as “revolutionary defeatism”. He argued that defeat in the war could also lead to revolution.

This was dramatically proven in March 1917 when Russian workers and soldiers toppled their government after almost three years of war.

Russia’s autocratic Tsarist regime had heaped immense misery on the country’s population when it declared war on Germany. Famine stalked Russia as the economic cost of the war effort lowered living standards. About two million Russian soldiers died on the front.

In February 1917, the regional military commander in the capital, St Petersburg, ordered bread rationing after supplies began to run out. Women rushed to buy bread each day, with stores frequently running out.

On International Women’s Day on 8 March, when there was no bread, protests turned into riots and strikes, with protesters raising the slogan of “Down with the Tsar”.

Two days after IWD, Russian soldiers, previously loyal to the Tsar, refused to fire upon the protesters. Seventy thousand soldiers of the St Petersburg garrison joined the 385,000 workers on strike on the city, bringing down the government. The Tsar abdicated and his ministers were arrested.

But the new Provisional government refused to end the war and in June launched a new military offensive against Germany and Austria.

In November 1917, the working class overthrew the Provisional government and took power, installing a new Bolshevik regime, led by Lenin and Trotsky, that promised “Bread, Peace and Land”.

True to their word, the Bolsheviks signed a peace treaty with Germany, at Brest-Litovsk, in March 1918, despite harsh German terms including, ironically enough, their seizure of Ukraine.

The Russian revolution inspired workers and soldiers’ revolt across Europe. In 1917 French armies were hit by mutiny against plans for another suicidal offensive across the trenches.

Opposition to the war was also growing inside Germany. Here, too, the mobilisation for war was savaging workers’ living standards and resulting in food shortages. This was not simply due to the Allied naval blockade but to the cutbacks in food production caused by forcing agricultural labourers into the army.

The winter of 1916-17 became known as the “turnip winter” due to the replacement of ordinary foods with turnip bread, turnip marmalade and turnip coffee.

In 1916 revolutionary socialists Rosa Luxemburg and Karl Liebknecht called a demonstration on May Day of thousands. The next day 55,000 workers went on strike to protest Liebknecht’s jailing for saying “Down with the war!”.

By 1918 it was clear Germany would lose the war. But the government wanted to avoid a complete surrender and negotiate a settlement.

In November, the Admiralty of the German Navy ordered one last roll of the dice against the British Navy, ordering a fleet based in Kiel to set sail for the English Channel. Fleet sailors saw this as suicidal. It was the spark for a rebellion that was already simmering.

The previous year, the crew of the one ship staged a protest over poor rations in Wilhelmshaven.

Two of the ringleaders were executed by firing squad while others were sentenced to prison.

Sailors, now knowing the high stakes involved in mutiny, formed secret sailors’ councils on a number of the large ships, awaiting their chance to revolt.

Following the order to set sail in November 1918, they acted.

Within days, the revolt spread to a strike wave of the working class of the city of Kiel itself. By the evening of 4 November, Kiel was firmly in the hands of about 40,000 rebellious sailors, soldiers and workers, as were other port towns including Wilhelmshaven within days.

Events in Kiel laid a pattern that was followed in every German city and town of note, with soldiers and workers fraternising and throwing out the representatives of the Kaiser’s government in each city and town.

The Kaiser abdicated and the new government signed an armistice on 11 November.

The Vietnam War famously produced enormous protests inside the US and its allies, including Australia. The combination of a mass anti-war movement, serious dissent inside the US armed forces and the heroic Vietnamese resistance saw the US defeated.

There was an even more serious anti-war revolt in Portugal in 1974. Its government had been waging wars against national liberation movements in its colonies in Africa since 1961, mostly notably Angola, Guinea-Bissau and Mozambique.

The country was ruled by a fascist dictatorship under Marcello Caetano. Political parties, trade unions and strikes were outlawed. Opponents of the regime were imprisoned and tortured by the notorious secret police, the PIDE.

With the colonial wars going badly, the armed forces were draining more than 40 per cent of the central budget and 13,000 soldiers had died, more than the country had lost in any conflict since the Napoleonic Wars.

The MFA’s first meeting was in September 1973, deep in the countryside and ostensibly for a “special farmhouse barbeque”, to avoid the scrutiny of Caetano’s secret police or the higher ranks in the army.

In March 1974 it led a botched coup attempt. The Caetano regime shrank from harsh reprisals against them so that by April the MFA had built up a network of 300 supporting officers across the armed forces. It even wrote a policy document for Portugal based on free elections, liberal values and an immediate end to the colonial wars.

On 25 April 1974 just after midnight, another coup against Caetano began. The radio and TV stations, the airport and general military headquarters were taken with little resistance. An autocratic regime that was over 45 years old crumbled in less than a day.

Workers came out onto the streets to see what the coup was about and when they realised the MFA was getting rid of Caetano they put red carnations in the gun barrels of the soldiers and by the end of the day jumped onto tanks to celebrate.

The MFA didn’t want to run the country, so they called upon a group of eminent generals, headed by General Spinola, a mild critic of the regime, to form a provisional government.

Spinola wanted to modernise Portugal’s economy while at the same time dragging out the colonial wars until the national liberation movements agreed to peace terms, to protect Portuguese businesses inside newly independent colonies.

But this did not satisfy Portuguese workers. A week after the coup, workers celebrated the first legal May Day demonstrations in their lives. A hundred thousand workers took over the centre of the capital, Lisbon, with red banners and speeches from left-wing leaders just returned from exile.

During May, at least 158 workplaces were involved in fierce confrontations with management, including 35 occupations over pay and the sacking of fascist managers and shop floor spies, known as the “saneamento” or literally the “cleansing”. This demand became the hallmark of every strike.

Spinola realised there would have to be concessions to workers’ economic and political demands in order to preserve Portuguese capitalism. He was forced to immediately ended the wars and grant independence to the African colonies.

Any major war results in attacks on workers’ wages and living standards at home in order to fund the slaughter, along with increasing numbers of workers dying in the fighting.

As the revolts following the First World War show most clearly, it can also open the possibility of a socialist revolution and a society run under workers’ democratic control. Workers everywhere have an interest in opposing war and demanding the wealth of society is used to address inequality, oppression and human need, not funding weapons and war.

It is already clear that Putin’s war in Ukraine is far less popular than his previous foreign invasions. Anti-war revolt inside Russia holds the hope of ending the current war and should inspire us to build a serious anti-war movement in Australia.