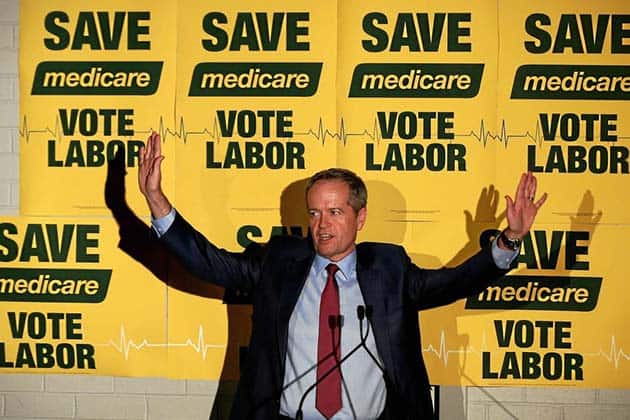 “Labor is back”, claimed a triumphant Bill Shorten in his election night speech. But in truth, the result was Labor’s second lowest primary vote since the 1930s. Of an overall 3.71 swing against the Coalition, only 2.27 per cent went to Greens and Labor.

The Liberals have moaned about what they are calling the “Mediscare” tactic of Labor and the unions. Turnbull, in his bizarre election night speech, said the cops would investigate a text message sent from the user “Medicare” on the day before the election, warning of Medicare cuts.

Labor were both telling the truth (the Coalition has frozen Medicare rebates and has cut funding to bulk-billing for essential tests), as well as drawing on voters’ understanding that the Liberals can’t be trusted with Medicare.

A union-run marginal seats campaign, Build a Better Future, chimed in with Labor’s Medicare message with door-knocking, phone banking and distributing leaflets at the polls.

The detested Peter Dutton complained of “union thugs ringing old women at night, scaring them on the issue of Medicare and misleading text messages being sent out across marginal seats as well as in our own seat”.

While the Medicare campaign, and Shorten’s opposition to corporate tax cuts, spoke to working class concerns, overall Labor’s promises were quite modest.

The unions were embarrassed in the lead up to the election when Labor said it would respect a Productivity Commission decision on penalty rates (meaning if the Commission decided to cut them, it would do nothing).

While opposing Coalition attacks on Medicare, Labor promised to restore only $4.9 billion in the next four years of $57 billion in cuts to hospitals over a decade.

The truth is that Labor is just as committed to running capitalism as the Coalition. During the campaign, Labor was anxious to show they would make sure that the budget would be returned to surplus.

They announced on 12 June that they would accept some of Tony Abbott’s 2014 budget measures in the name of fiscal responsibility. Such measures included cutting the Family Tax Benefit, leaving families on more than $100,000 with half their payment. Like the Coalition, they also want university graduates to pay their debt back sooner, axe the Schoolkids Bonus and make changes to the age pension.

Labor’s history of implementing cuts and attacking its own voting base while in power has seen its membership shrink since the 1980s. It has not achieved a 50 per cent primary vote in a federal election since 1983, after which the Hawke government led the party’s embrace of neo-liberal politics.

Worryingly this time, some of the discontent went the way of racist populists One Nation, who received high votes in Labor marginal seats like Herbert, in Queensland and Paterson, in NSW. That’s even more concerning when the unions were often using the slogan of “Aussie jobs”.

Peak trade union body the Australian Council of Trade Unions (ACTU) is claiming victory for its campaign to put the Liberals last in major seats. It does seem the campaign was successful in cementing a swing. Key organiser Sally McManus claims out of 22 seats targeted, 12 have gone to Labor and 5 may still.

Thousands of union activists slogged it out, knocking on doors and calling voters. Shorten thanked “the mighty trade union movement” in his election night speech.

But the disproportionate role the unions played hasn’t won workers any guarantees.

We learnt this the hard way when a massive Your Rights at Work campaign sunk all its resources into getting Kevin Rudd elected in 2007—only to have him keep most of the hated WorkChoices and anti-union ABCC intact.

As we go to press, a ramshackle Turnbull government looks likely. If so, it will be a weak government, vulnerable to resistance.

If the 25 organisers employed by the ACTU had organised in workplaces and built industrial action, we would now be in a better position to stop any attempt to attack penalty rates, Medicare, and education, and defend the public servants.

That is what needs to happen now.

It has been protests that have made refugee rights and equal marriage such big issues. It is because the CFMEU organises effective strike action that the Liberals were so keen on trying to attack them.

We don’t get change by relying on Turnbull’s misfortunes or putting our hopes in Labor.