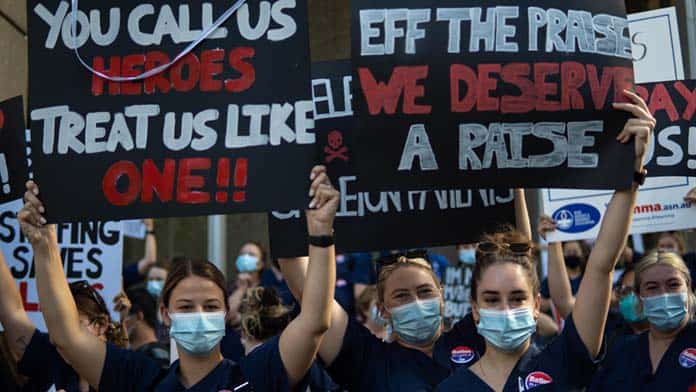 Morrison’s efforts to back fossil fuels and undermine climate action, his failure to even understand the scale of sexism and sexual harassment, and his continual efforts to stir fear and division, including against trans people and refugees, have all been solidly rejected.

But we can’t leave it to Labor to undo the damage. We need to organise from below through protests and strikes to push Labor to deliver far more than it’s promised.

Here we look at what Labor is promising … and what we really need.

Albanese’s remark that he’d “absolutely” support a 5.1 per cent boost to the minimum wage to keep up with inflation has raised expectations he’ll act on the cost of living.

But Albanese later walked this back, saying it was only the lowest paid 2 per cent of workers who should get 5.1 per cent.

Labor has also pledged to fund whatever wage increase the Fair Work Commission awards aged care workers. Wages in the sector are appallingly low. It should fund the full union claim of a $5 an hour increase but has so far refused.

Albanese wants to host a jobs summit involving business and unions to “increase wages at the same time as you increase profits” by increasing productivity.

But the bosses have had years of higher profits and forcing us to work harder—we need wages rises with no strings attached.

The best thing Labor could do to back wage increases is unshackle the unions through scrapping the restrictions on the right to strike. Its promise to get rid of the Australian Building and Construction Commission is a good start.

But the requirements for secret ballots, notice in advance to employers of industrial action and the fines for unlawful strike action also need to go.

Unions everywhere need to start the push for wage rises, following the lead of NSW teachers, nurses and university staff who are already striking for pay.

With inflation rising, JobSeeker payments are desperately in need of an increase from the unliveable rate of $46 a day. But Labor has dropped any plans to do so, saying it isn’t affordable due to government debt.

On the other hand, Labor has gone along with the Liberals’ huge expansion in military spending targeted at China.

It has backed the $170 billion for nuclear subs and the plan to increase defence spending to 2 per cent of GDP each year (around $45 billion), and billions for missiles, new frigates and expanding the armed forces. This is money that could be going to fund JobSeeker, aged care, hospitals and schools.

Labor will introduce all the [email protected] report’s recommendations, including the positive duty on employers to prevent sexual harassment and discrimination.

Increased funding for childcare was a central Labor promise. Albanese said on election night he wanted to work towards a system of universal childcare.

This should include renationalising childcare centres to provide decent staffing and pay for childcare workers—many of them women.

Albanese says he wants to “end the climate wars” between Labor and Liberals. But seeking compromise with the Peter Duttons of the world is not going to deliver the climate action we need.

Labor’s emissions reduction target of 43 per cent by 2030 is less than the Business Council of Australia’s target, the 60 per cent pushed by the teal independents or the 75 per cent backed by the Climate Council and The Greens.

Labor wants Australia “to be a renewable energy superpower”, promising to fund transmission infrastructure to allow this. But we also need public investment in renewable energy and manufacturing to ensure there are good alternative jobs for workers in coal communities.

Labor must also abandon plans to build the gas plant at Kurri Kurri, wasting $1.3 billion on a fossil fuel power station. Labor’s plan to convert it to green hydrogen has been rejected by the company building it, which says the storage pipeline won’t allow conversion to hydrogen fuel, because this would cost even more.

Labor is committed to converting Temporary Protection Visas and SHEVs into permanent visas—ending years of uncertainty for thousands of refugees. It will allow the Murugappan family to return home to Biloela.

But it also needs to allow appeals for all those unfairly rejected under the Coalition’s fast track processing system, who face deportation. And it must allow refugees medevaced from Nauru and PNG to stay in Australia on permanent visas. There will still be 505 of them with no chance of resettlement even after the New Zealand deal is exhausted.

It also needs to deliver the 20,000 additional places for Afghan refugees that should have been offered after the Taliban takeover. Boat turnbacks and the offshore detention policy also have to go.

Labor has made much of its plan to “embrace the Uluru Statement from the Heart” through a referendum to include an Indigenous Voice to parliament in the constitution.

But this will be empty symbolism unless Labor also boosts the modest funding it has announced for Indigenous housing, alternatives to imprisonment, and restores jobs and community control in remote areas that were torn up under the NT Intervention.