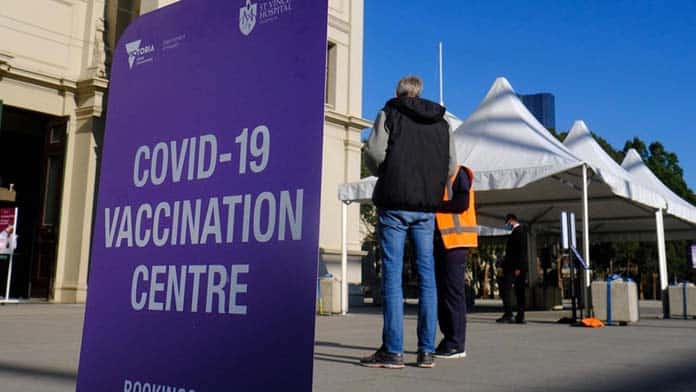 The fourth Victorian lockdown has highlighted how the Morrison government’s incompetence and negligence is putting millions at greater risk from the COVID pandemic.

The lockdown was a panicked reaction by the Victorian government, despite the significant improvements in public health from a year ago.

Almost 10 per cent of the state’s population was tested during the outbreak. Contact tracing saw thousands go into isolation. The system, finally, was working, making lockdown unnecessary.

Meanwhile, the Coalition’s contempt towards workers and their families has taken many forms.

Only 4.3 million doses had been delivered in Australia by 1 June just after the lockdown began—compared to 65 million in the UK. Critically, only 2 per cent of Australians had received a second dose.

Morrison repeatedly said rolling out vaccinations was not a race. For once, he’s been true to his word. The rollout has been as slow as treacle.

The government promised in February that vulnerable people, including aged care and disability residents and staff, would be among those vaccinated first, within six weeks.

Yet by the beginning of June, it admitted that only 40,000 aged-care staff (out of a workforce of 366,000) had received their first jabs.

Others may have been vaccinated—the government simply doesn’t know.

The government was still calling for tenders to deliver jabs in aged care homes on 18 May, barely a week before Victoria went into lockdown.

Worse, it became clear that the private companies delivering the jabs had not been contracted to vaccinate staff, who got doses only if some were left over. Those living or working in disability homes were treated even worse.

Years of neo-liberal neglect have hollowed out governments’ ability to deliver basic services and workers and the vulnerable are paying the price.

The ACTU has called for two days’ paid vaccination leave for workers in the care sector. If the government was serious about boosting vaccination rates, it would bring this in for all workers.

As the COVID cluster in Melbourne grew, it was revealed that the Liberals had thrown people in aged care to the wolves.

First it was revealed that, even as the Melbourne outbreak grew, there were aged care homes where no residents had been vaccinated. Health Minister Greg Hunt admitted at the end of May that there were still 29 nursing homes in Victoria that had yet to receive a single vaccination dose.

Then news leaked that the federal government had, in November, abandoned the scheme that paid aged care workers extra so that they would not need to work across more than one site.

Even when the scheme was running, it was little more than a token effort. As The Age reported, only 33 grants totalling a mere $12.5 million were paid to aged care companies that operate about 90 of Victoria’s 600 Commonwealth-regulated homes.

Yet the movement of low-paid casual workers across the sector was a major way that the virus travelled between aged care homes in 2020. The Coalition government would rather save a pittance than save lives.

We need to fight for an end to casualisation and for the nationalisation of private aged care.

There have been at least 22 virus breakouts from hotel quarantine. The east coast states have been calling since last year for purpose-built quarantine facilities modelled on the highly successful site at Howard Springs in Darwin, where people stay in cabins with plenty of fresh air.

Morrison has dragged his feet throughout. Defence Minister Peter Dutton went so far as to dismiss Victoria’s proposal as “smoke and mirrors”.

A few weeks later, under pressure from the lockdown, Morrison finally supported a quarantine facility in Melbourne. But he insisted that it had to be as well as hotel quarantine, not instead—meaning the possibility of outbreaks will persist.

Morrison was similarly late to the party with financial support for workers stood down during the lockdown. Finally, he granted a miserly $500 a week ($325 for those working less than 20 hours).

Even that was riddled with conditions. The payment doesn’t cover the first week of lockdown; it applies only in areas designated as “hot spots”; people getting any kind of benefit payment, however modest, get nothing; and it will be taxed.

Every step of the way, Morrison has reacted late and inadequately to the challenges of the pandemic.

He needs to be driven out of office. A campaign for an end to casualisation, for vaccination leave and for taking all aged care into public hands would be an excellent place to start that fight.