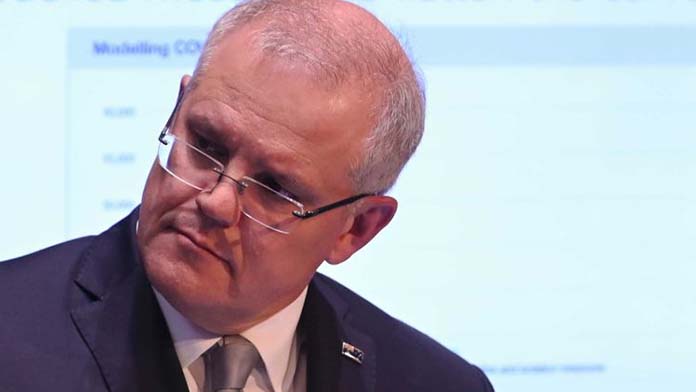 Australia has managed to avoid the spread of coronavirus on anything like the scale seen in parts of Europe or the US. Scott Morrison would have us believe this is all down to his swift, effective action, and the decision to follow expert health advice.

But his measures have been little different to other countries that have experienced vastly higher deaths and infection outbreaks. Morrison only looks competent compared to the hopeless bungling of Donald Trump and Boris Johnson in the US and Britain, where the virus is raging out of control and 100,000 and 37,000 respectively have died, so far.

The truth is that Australia has avoided a similar catastrophe mostly because of geography and luck.

Australia has not seen widespread transmission in the community but there have been outbreaks as a result of the failure to properly test and trace for the virus, such as the Ruby Princess cruise ship debacle and the clusters of cases at Sydney’s Newmarch House aged care home.

So far 102 people have died, almost 40 per cent of them as a result of just these two clusters.

More than 650 coronavirus cases have now been linked to the Ruby Princess cruise ship. At Newmarch House one infected carer working at the home has led to 71 cases and 17 deaths, due to insufficient steps to protect residents. In another cluster, at the Cedar Meats processing plant in Melbourne, the failure to close the plant after confirmation of two cases there has led to 111 infections including 64 workers and another 44 close contacts.

There are countries located close to the initial outbreak in China that have done far better. Taiwan has kept infections to just 441 cases and seven deaths. Vietnam has only 325 cases and not a single death. South Korea has more deaths but managed to control an outbreak after the virus was spread at a church service attended by hundreds of people.

Geography meant that there were fewer international travellers here, so Morrison was given time to avoid a widespread outbreak that authorities elsewhere did not have. It was sheer luck that Australia avoided widespread infection, because Australia was no better prepared than most other countries.

The first major measure Morrison took was the government’s travel ban on non-residents from China. This was not imposed until 1 February. By then the virus was already spreading under the radar in France, Italy and the US.

France has discovered a case of coronavirus from 27 December, after re-testing samples from hospitalised pneumonia patients. This was before health authorities in Wuhan even announced the outbreak publicly on 31 December.

Italian officials believe coronavirus spread out of control in the community after arriving there on 25 or 26 January. And it began spreading undetected in Seattle in the US around 19 January.

The reason countries resorted to travel bans is that they were not properly prepared to test and quarantine everyone arriving from overseas. Nor were Morrison’s travel restrictions particularly world leading. Italy and Iran were already in the midst of serious outbreaks when they both imposed a ban on travel for non-citizens from China the day before Morrison. A number of other countries including the US, India, Indonesia, Laos, New Zealand and the Philippines did so the next day.

Travel restrictions don’t completely keep infection out. No ban could prevent the tens of thousands of Australian citizens and residents who have have returned from China, Europe and the US since February.

And Morrison’s travel restrictions were applied on a racist, selective basis that did not block non-citizens from Europe and the US for many weeks although the virus was widely circulating in those countries.

Morrison has also been credited with swiftly imposing social distancing restrictions on mass gatherings, including a partial lockdown of people in their homes.

But, as with so many other countries, he resorted to a lockdown because the government wasn’t prepared for the pandemic. The lack of testing kits meant they had to be rationed for weeks only to those recently returned from overseas who had clear symptoms. This ran the risk of missing asymptomatic carriers, who it’s estimated account for 20 per cent of coronavirus cases.

Despite the claims that Australia has a high rate of testing, Chief Medical Officer Brendan Murphy told a Senate committee at the end of April that, “once we have really good strong testing… that will make us much more confident about relaxing [social distancing] restrictions.” In other words, the government lacked good strong testing capacity for months.

Victoria was only able to begin its “testing blitz”, aiming to sample 150,000 people in three weeks to look for asymptomatic carriers, at the end of April. Australia’s first coronavirus case was at the end of January.

Brendan Murphy has also admitted that, if Australia had experienced a serious outbreak, hospitals would have been in a “precarious position” with shocking shortages of personal protective equipment–including surgical gowns and face shields, which the government had failed to stockpile.

And again, Australia was far from the first to move on imposing social distancing. Italy locked down part of Lombardy on 21 February, and the whole country on 9 March, after the virus was already spreading out of control.

Morrison’s initial step banning mass gatherings over 500 people came into force on 16 March. By then a raft of European countries had already implemented full lockdowns, including Denmark, Ireland, Poland, Spain and Austria, alongside some countries in the Middle East and elsewhere. Yet Ireland has nearly 1500 deaths and Austria over 600, compared to around 100 here.

The lockdown and the ban on gatherings has re-enforced Morrison’s authoritarian inclinations, with police issuing fines for the flimsiest of reasons. Although ironically it has been Labor governments in Queensland and Victoria that have unleashed police using health regulations to attack refugee protests.

So far the coronavirus is under control. In the coming months, workers will have to fight for the testing and resources to ensure they have safe workplaces. And we will have to fight to maintain a properly funded, fully resourced public health system capable of the mass testing, tracing and isolation of any small outbreaks that is vital in limiting its spread.