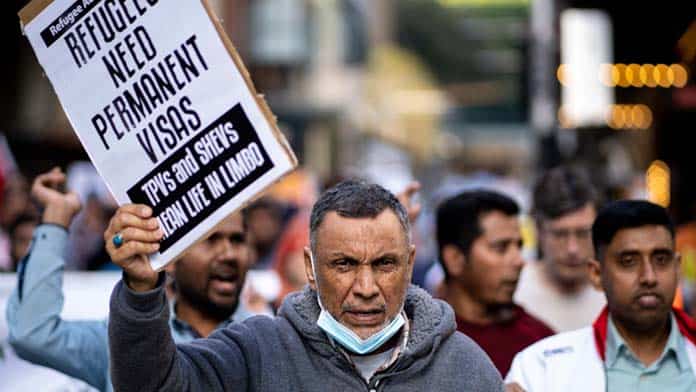 Late last month, refugees brought to Australia from PNG and Nauru received a threatening letter from the government telling them they had to leave the country.

After years of torture in offshore detention they were brought to Australia for medical treatment, some under the Medevac law.

The letter from Home Affairs declared that “Australia is not an option for you” and that their only chance of a secure visa was to apply to New Zealand. They were given just a week to respond.

This produced shock and despair among some of the 1200 refugees from offshore now in Australia, one third of all those originally sent to Manus Island and Nauru.

The last of those held in detention in the Park Hotel in Melbourne and the Kangaroo Point Hotel in Brisbane were released earlier this year. Many now have jobs and established friendships in the community.

Farhad Bandesh, one of those detained on Manus Island and then at the Mantra Hotel in Melbourne for a total of seven years, is a well-known artist and musician. He told The Age, “I am working and living my life here and cannot be yet again ripped apart from my new family, friends [and] community.”

Others have been here much longer, some as long as nine years, including pregnant women who were brought from Nauru as early as 2013 to give birth. Many have children who are at school and Australian partners from whom they will be permanently separated if they leave the country.

Roghieh, an Iranian refugee, explained to a forum in Sydney how she was transferred to hospital in Brisbane after detention on Nauru gave her serious mental health problems. After her release, “I was given community detention in Sydney, then a six-month visa.

“First they told me I have to go to America. Now after ten years, again they sent me a message to say, you have to go to New Zealand.”

Most refugees do not want to apply. In late September The Guardian reported that just 36 people had asked to go to New Zealand, including those on Nauru, with many of those on the island already heading to the US or Canada.

The resettlement deal with New Zealand provides only 450 places, spread over three years. And the Labor government has made it clear that it will prevent those sent to New Zealand from ever returning to Australia.

This ruthless cruelty is the product of Labor’s ongoing support for offshore detention. It was Kevin Rudd’s Labor government that declared that no asylum-seeker who arrived by boat after 19 July 2013 would ever be allowed to stay in Australia.

Home Affairs Minister Clare O’Neil’s office told a refugee supporter in Melbourne who had written to protest that the threatening letter was a “working document” sent in error without her knowledge.

But there has been no apology to refugees further traumatised by it.

But even those with Temporary Protection Visas and SHEVs are still waiting to find out when they will get permanent visas. More than five months on from the election the government has still refused even to give a timeline for when this will happen.

Year 12 students finishing school on temporary visas are barred from going to university, as they can only apply as international students, making the fees unaffordable. Others are seeing their visas expire and are cut off from Medicare while they go through the process to apply again.

There are also almost 10,000 asylum seekers rejected under the Liberals’ unfair Fast Track processing system who need a review of their cases—and 200 still stranded on Nauru and Manus Island. All deserve permanent visas to live in Australia, after years of torture at the hands of the Australian government.

Refugees nationwide have joined protests in large numbers since the election to call for permanent visas, with 1500 rallying outside federal parliament in September as well as in other cities. We need to keep fighting to make sure no one is left behind.