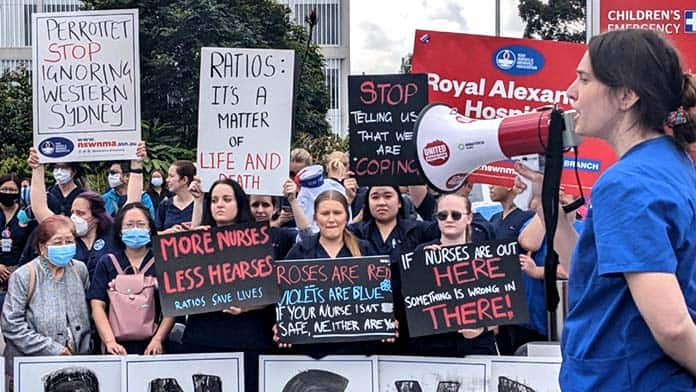 Nurses across NSW walked off work for 24 hours yesterday in their fourth day of strike action this year.

The action comes after a week of industrial action that crippled train and bus services across Sydney, as public sector workers continue to fight the NSW Liberal government and Premier Dominic Perrottet over understaffing and their insulting, below-inflation 3 per cent pay cap.

The nurses’ action was the first this year to involve a 24-hour strike by all branches, after some branches stopped work for four or 12 hours in previous actions. More than 65 rallies were held outside hospitals across the state.

At Westmead Hospital in western Sydney, several hundred nurses joined a 24-hour picket line. Some nurses brought sleeping bags, preparing to camp out the night in protest. There were chants of “strike, strike, strike” as frustration at the dire conditions, and the NSW Liberals’ inaction, boiled over.

“The last few years have been tough on everyone and it’s getting worse and worse,” with more and more nurses quitting their jobs in disgust and leaving the health system, Andre, a nurse at Blacktown hospital, told the crowd.

“Nurses are redeployed every day, making their own wards short because other areas are so understaffed they are considered unsafe … Nurses feel like no one’s listening to us.”

About 200 nurses also rallied outside Royal Prince Alfred Hospital in Camperdown. Cherie, the former branch president of the union there, explained outside the hospital that,“Ambulances will wait up to four hours to offload a patient … we don’t have the staff.

“We are entitled to a standard that is better than this.”

Phillip, a community health nurse said, “I’ve never known our association to be so angry … it’s never been easier to get people out,” making it clear nurses were willing to step up the action further.

“We want to be able to finish our shifts and know that we’ve provided the care we want to provide.”

Michael Whaites, the union’s new Assistant General Secretary, told the crowd at Westmead, “Minister Hazzard thinks $3000 [as a one-off bonus], most of which you’re losing through tax, was enough to buy your silence. Perrottet and Hazzard haven’t listened.”

Promising further strike action, he told nurses, “We are going to have to be out here again; again and again, until they deliver ratios across the state.”

The strike was the first to follow a vote from members to demand a 7 per cent pay increase to account for the rising cost of living, rejecting the NSW Liberals’ public sector pay cap.

But with inflation set to reach almost 8 per cent by the end of this year, the Liberals’ pay offer means a large pay cut in real terms.

When the motion for the pay claim was passed at a stop-work meeting earlier this year, union officials refused to support it until another electronic ballot was held through individual branches.

Despite their efforts, the majority of nurses at a majority of branches voted to reaffirm the 7 per cent pay claim.

This, alongside the union’s decision to hold decentralised rallies rather than the much stronger united strike rallies of up to 5000 nurses it held during strikes earlier this year, shows that the officials are nervous to escalate action. They want to slow down the strikes and redirect the campaign towards the state election in March, with the aim of electing a state Labor government.

But Labor has refused to commit to the nurses’ demands over staff-to-patient ratios or pay. Winning these depends on escalating the strike action.

Public sector-wide strike action could ramp up the pressure on Perrottet to act. The government is already starting to buckle under the pressure.

In the face of ongoing industrial action by rail workers, Perrottet has threatened to tear up their enterprise agreement in desperation unless the strike action stops. The union is demanding a pay increase just 0.5 per cent above the pay cap, and a commitment to modify the Liberals’ new intercity train fleet, which has been designed to reduce staffing to unsafe levels.

These hard-ball tactics are a sign of weakness. Teachers, bus drivers and public servants have all staged strike action in recent months. If public sector workers all strike together, it could deal Perrottet a decisive blow.

Nurses, teachers and other public sector workers need to push union leaders to call united action. This is the kind of power that can stop Perrottet.