Organising the unemployed: Dole strikes and the 1930s Depression 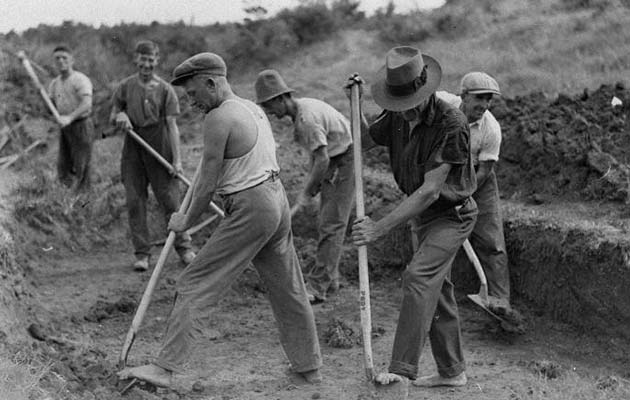 Amid the mass unemployment of the Depression, the Communist Party did some of its best work, organising the fight for high dole payments and more jobs writes Tom Orsag

The Great Depression saw unemployment on a scale Australia had never experienced. Once it began in 1929, unemployment doubled to 21 per cent by the middle of the following year. It kept rising, hitting a high of 30 per cent out of work in 1932.

Today’s unemployment payments did not exist. Before the Depression the unemployed had relied on charities subsidised by government. In response to the crisis, each state government set up its own relief system for the unemployed—known variously as “susso” or sustenance and the dole. Most states levied an extra tax on incomes to fund it.

But the government’s attitude to the unemployed was often patronising, and relief barely enough to live on.

This led to protests and anger amongst the unemployed. The Communist Party set up a national Unemployed Workers Movement (UWM) in 1930 with the aim of organising them. It was able to lead a number of successful struggles to improve conditions, greatly swelling the membership and prestige of the party.

Unemployment relief was family based, given almost always to the man of the household. Single men were sometimes given nothing.

Young, single women were sometimes given sustenance or work in sewing centres but were more often completely ignored.

The unemployed alternated between periods receiving only basic food rations, periods of “relief work” for councils or on government projects where they also received cash, and times when they received nothing.

While there were some public expressions of concern by members of the capitalist class, privately their real opinions were less than “charitable”.

Bosses, churchmen and so-called “community leaders” berated the dole as a system where the “moral fibre” of the unemployed was being sapped by charity with society getting no recompense for its tax money.

As late as August 1931, with unemployment over 27 per cent of unionists, a police magistrate could remark, “It is the fault of many persons themselves that they are not working at present.”

In May 1932 the Victorian state government of Stanley Argyle appointed William Kent, an open admirer of fascism, as Minister in charge of the Sustenance Branch of the Ministry of Labour. He said that sustenance without work had led to a “marked mental and moral deterioration and a lowering of tone” among its recipients.

The police control of food relief placed the unemployed into a category of “outlaw”. The unemployed demanded the relief issue was taken out of the hands of the police in town and country alike.

The UWM also organised to resist evictions of the unemployed and their families who were unable to pay rent. There was widespread local sympathy for this in working class suburbs like Newtown, Redfern and Bankstown in Sydney. The campaign even descended into armed warfare, with homes turned into fortresses to resist police assault, complete with the exchange of gunfire. Invariably, the main UWM organisers ended up in jail.

This extreme militancy was a product both of the desperation of the unemployed and the Communist Party’s own ultra-left tactics and extreme sectarianism towards the Labor Party.

The Communist Party’s politics were deeply flawed as a result of their support for Stalinist Russia and their uncritical acceptance of the instructions issued by the Stalinised Communist International. In 1929 the CPA adopted the idea of Stalin’s notorious “Third Period”, that a new period of wars and revolutions was imminent requiring the Communist Parties to take the offensive.

The Labor Party was labelled as “social-fascist”, i.e. worse than the Liberal Party and genuine fascism because it gave a “socialist” colouring to its supposed “fascist” politics.

This led to fierce competition between the UWM and unemployed associations set up by Trades Hall councils and the Labor Party.

In Sydney UWM members repeatedly disrupted Trades Hall meetings, after the UWM was refused representation at the meetings.

The CPA entered the Depression as a small group of little more than 250 members in 1929.

As Tom O’Lincoln wrote in The Militant Minority, “The skyrocketing unemployment and the vacuum of trade union leadership [in addressing the issue] meant that a small party like the CPA was bound to find areas where its militancy would pay off and where the more bizarre aspects of Stalinist politics might not be an obstacle for a time.”

The Communist Party was able to grow significantly, to 3000 members by 1934.

Its most dramatic successes were on the sustenance projects set up to provide work for the unemployed. In a number of places unemployed workers managed to win higher pay through “dole strikes”.

Victoria’s new conservative state government introduced a tougher “work-for-the-dole” sustenance scheme in December 1932. Anyone who did not turn up to work would now have their rations cancelled.

Ralph Gibson, a Communist Party activist, wrote, “‘Work for the Dole’ was something different from the ‘relief work’ which at first consisted of two or three months’ work for one of the Government departments and which, despite all its bad features, was paid in wages, and was partly an answer to the dire need of the unemployed for something in addition to food and groceries—clothing especially.

“‘Work for the Dole’ was work for so many hours a week to ‘earn’ the weekly voucher. It was part of the Government’s ‘economy’ drive, it could get work done for the dole for which it would otherwise have to pay wages, and it resulted also from a ‘moral’ campaign in church and other circles about the evils of getting sustenance without working.”

The CPA led a strike in July 1933 demanding an increase in the rations for work building the Melbourne Shrine. It lasted for eight weeks and won an almost 50 per cent increase.

A second strike in June 1935 forced rates up a second time. This time it was officially led by Victorian Trades Hall Council and its Unemployed Committee, with 3000 men on strike for five weeks.

Communist Party leader Ernie Thornton explained, “The dole workers won their strike only because they adopted tactics that hit the boss where it hurt—for instance, the demonstrations in the City on the main shopping night; one result was that the London Stores were £1500 behind at closing time that night, and Myers sent their hundreds of shop girls home at 7:30 pm.”

The success of the unemployed was all the more remarkable given the defeats suffered by the trade union movement during the Depression. They were a victory for the CPA’s emphasis on rank-and-file control of disputes and militant tactics.

Strikes and protests by unemployed “relief work” teams were constant, as a response to unsafe and unhealthy working conditions, sackings and refusal to provide basic items like proper boots, first aid kits and drinking water.

In June and August 1935 there were “dole strikes” that won concessions from penny-pinching State Liberal government across NSW and Victoria.

The strike at Como was led by rock chippers, who were being denied a wage increase for performing skilled work. A rank and file committee of 40 men and women ran the strike.

Wives not only organised social functions, and collected money and food, but also wrote articles and marched in demonstrations. On one occasion police stopped a march of unemployed men in Corrimal.

“When this became known to the women they immediately took the lead and marched over three miles to the [North Illawarra] council chambers, which they packed to the limit. The mayor was asked to receive a deputation of women and a speaker which he refused…

“The mayor threatened to have the room cleared if they were not quiet, but the women told him he could have them locked up, at least they would be fed, and they would take their children along too, and they could feed them also; that even if their menfolk were on strike they didn’t intend to starve. A further demonstration was arranged by the men and the women to the Food Relief Depot at Wollongong, which resulted in a complete victory for the strikers, for besides receiving food relief for the time they were on strike, the men were also reinstated.”

In NSW, the Minister of Labour ordered a wage cut to relief workers and a speed up in 1934. Lake Macquarie Shire Council happily obliged.

In July 1935, a mass meeting of 680 relief workers in West Wallsend decided to strike. A strike committee of more than 60 workers was elected and active picketing was set up.

The unemployed made links with the Newcastle Trades Hall and several large demonstrations were held. Collections of money in solidarity were taken up by the Newcastle unions.

A huge public meeting was held in the Newcastle Town Hall, with union leaders expressing support for the striking unemployed.

At first, the Liberal state government said it was a matter between the Shire Council and the unemployed strikers.

When the Council decided to support the strikers, the government declared it would withdraw the relief scheme altogether, “as the Shire Council was incompetent”.

The government also said food relief would not be issued, even to those still working. But the strikers did not succumb to the government›s blackmail.

As the economy revived, many of the unemployed eventually found jobs and went on to play a key role in the trade unions.

Organising the unemployed laid the basis for further growth of the Communist Party of Australia and for class-wide battles in workplaces in Australia in the late 1940s.