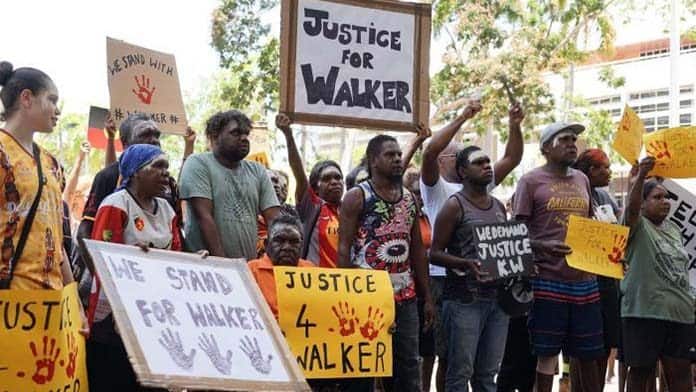 A wave of outrage and protest has forced murder charges against police officer Zachary Rolfe, after he shot 19-year-old Warlpiri man, Kumanjayi Walker. The shooting happened in his grandmother’s house, in front of his girlfriend and family on Saturday 9 November.

At Lajamanu, the second biggest Warlpiri community in the Northern Territory, the whole community joined a protest, “We got all the kids out of school too, and walked to the police station,” Valerie Patterson, a community educator told Solidarity.

More than 200 people marched to the police station in Tennant Creek. A national day of action on 13 November saw thousands rally in capital cities and regional centres across the country.

The murder charge was announced that night, while a huge mobilisation of Warlpiri people was moving into Alice Springs, including more than 150 cars. More than 1000 people marched the following day, the biggest Alice Springs demonstration in decades.

The decision to charge Rolfe is rare, and a significant breakthrough. But there is a long way to go before there is any justice.

A Senior Constable charged with murder for shooting Aboriginal teenager Robert Jongmin at Wadeye in 2003 had the charge downgraded and eventually dropped.

Rolfe’s release on bail was unusual for such a serious charge. As many have pointed out, there is no way an Indigenous person would have been released. He has been allowed to return to Canberra where he was raised in a wealthy, well connected family.

What we know so far suggests an attempted police cover-up. Police spokesmen initially said two shots were fired, then the story changed to three.

Police Commissioner Jamie Chalker said the officer was stabbed “by a sharp or an edged weapon.”  Eye-witnesses from inside the house insisted there was no weapon.

Police say Walker was shot around 7.15pm on Saturday night. But there was no formal request for an airlift from the Royal Flying Doctors Service (RFDS) until 8.15pm. Walker was declared dead soon after. The RFDS never came, saying they had not been assured of their safety.

Medical staff based at Yuendumu had been withdrawn by NT Health on Saturday, citing “community unrest”. John Patterson from the Aboriginal Medical Services Alliance said, “it is totally unacceptable to not have clinic staff there when you’ve got a community of more than a thousand people” and also slammed the racism of the decision not to deploy RFDS.

The media has played up Rolfe’s history of Army service in Afghanistan. But Yuendumu now looks like a warzone. Police tactical response teams were flown in on the night of the shooting and still occupy the community in large numbers, many brandishing assault rifles.

At protests following the shooting, Warlpiri leaders demanded the police disarm across all remote communities and leave Yuendumu entirely for at least a year.

Police attempted to create divisions—evacuating non-Indigenous teaching and other staff. “The teachers don’t want to go. This is not a black-white fight,” Valerie Martin told Solidarity from Yuendumu, “Our issue is with the police. We want them out.”

Alice Springs too is heavily occupied. A 23-year-old Central Arrente man was struck by an undercover vehicle after being pursued by the khaki-clad Territory Response Group on 18 November. He remained in a serious condition in Adelaide hospital as this was published.

Since the NT Intervention in 2007, Aboriginal communities have lived under racist, dictatorial controls. Thousands of jobs were cut, community councils abolished and social security “quarantined” onto a BasicsCard. Police numbers increased dramatically and they have the power to enter homes without a warrant.

Valerie Martin said, “We will keep fighting for justice. And we need to get rid of this whole racist system now, scrap the Intervention laws and put power back into the community”.

By Ian Rintoul and Paddy Gibson

ABOUT US
Solidarity is a socialist group with branches across Australia. We are opposed to the madness of capitalism, which is plunging us into global recession and misery at the same time as wrecking the planet’s future. We are taking the first steps towards building an organisation that can help lead the fight for an alternative system based on mass democratic planning, in the interests of human need not profit. Read more about Solidarity here or check out details of our meetings and events here.
Contact us: solidarity[email protected]
FOLLOW US
Thanks for signing up.