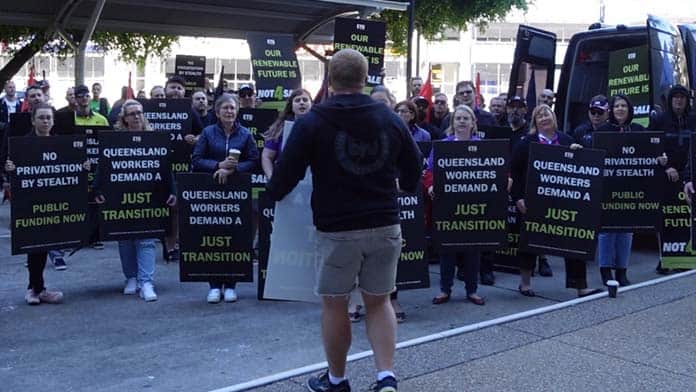 Climate groups hailed the announcement, with the Australian Youth Climate Coalition calling it a “phenomenal win”. This kind of significant government spending on renewables stands in stark contrast to the shameless climate vandalism of Scott Morrison. Morrison’s “gas-fired recovery” is throwing billions at the fossil fuel industry. Australia was ranked last on climate action among 170 nations in a UN report in July.

The Queensland government’s announcement came after tens of thousands hit the streets around the country to join climate strikes on 21 May. For the first time, School Strike 4 Climate demanded an expansion of public renewable energy. Allen Hicks, National Secretary of the Electrical Trades Union (ETU), addressed the Sydney rally and called for the government to “build some offshore wind” to create sustainable jobs, instead of spending $600 million on the proposed Kurri Kurri gas plant.

Queensland Premier Annastacia Palaszczuk said the fund would help establish “a job-generating clean energy industrial ecosystem”. It is designed to support projects that involve everything from manufacturing clean energy technology, to hydrogen production, and the extraction of minerals used in renewable energy.

ETU Divisional Secretary Peter Ong responded by saying, “we are on the right track with this investment”. But he also pointedly stated that, “we strongly oppose the privatisation of renewables assets” and, “we will continue to push for majority public ownership of renewables assets alongside a just transition for workers and their communities”.

The Queensland government’s Clean Energy Finance Corporation (CleanCo) was set up in 2019 as a government energy company to invest in renewables. But the bulk of the projects it has supported are privately owned. Three of its four renewables projects to date are simply power purchase agreements, where CleanCo buys power from a private company. The other is a public-private partnership that will be just 10 per cent public-owned.

At a Federal level Chris Bowen has said the creation of tens of thousands of jobs in offshore wind will be a “top priority” for the next Labor government. But this is limited to “unlocking” private investment currently blocked by the lack of a regulatory framework.

Only direct government investment and ownership of renewables projects can ensure a rapid and just transition.

The kind of drastic cuts in emissions needed to tackle climate change will require a comprehensive government plan to transition to 100 per cent renewable energy, not simply small increases of renewables in the “energy mix”.

Despite considerable renewables funding, the Queensland government continues to support the Adani coal mine and in June last year announced a multi-million dollar support package aimed at “the survival and revival” of Queensland’s LNG industry. The Queensland government’s CleanCo even owns the Swanbank E gas-fired power station.

And there can be no just transition if projects are run for profit.

Private sector control of renewables projects has been a disaster for workers. The largely un-unionised workforce routinely faces sub-standard wages and conditions, preventable injuries and deaths.

In February this year 230 workers were sacked via text message on the first major solar farm to be built in Australia by energy giant Shell. They were doing electrical work on the 120MW Gangarri solar project near Wandoan in Queensland and were stood down by contractor Sterling and Wilson after a contractual dispute.

ETU state secretary Peter Ong described the sackings as “brutal” and renewables as a “cowboy industry”, saying: “Big businesses like Sterling & Wilson have exploited the loopholes in the Fair Work legislation, where they can let workers go at a whim, they don’t care how the workers are treated, it’s all about getting the biggest bang for their buck”.

Nothing less than full public ownership of renewables projects can ensure a rapid and just transition where workers are prioritised over profit.