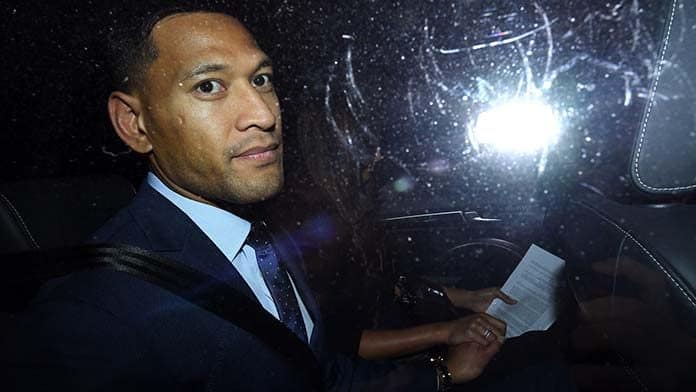 The right has seized upon the sacking of football superstar Israel Folau to further a homophobic campaign in the name of “religious freedoms”.

Folau had his multi-million dollar contract terminated by Rugby Australia just before the federal election, for persistently spruiking homophobia from his public social media accounts.

Barnaby Joyce has taken the opportunity to demand a “Folau’s law” protecting bigots from these kinds of sanctions.

Even sections of the union movement including the CFMMEU national president Tony Maher have lined up to defend Folau. Former ACTU assistant secretary Tim Lyons says there is an, “important principle here about employers regulating private conduct”.

But Folau is not a worker defending his livelihood against a boss. He is a public figure being held to account for spreading bigotry who earns over $1 million a year.

His homophobia has been widely rejected. Wallabies coach Michael Cheika said he wouldn’t be selected for the team again. The NRL also indicated he could not play there, given the league’s inclusiveness code.

The important principle here is the basic one of solidarity with the oppressed. No unionist should defend the right for millionaire bigots to tell gays they’re going to hell.

In defending such bigots, union leaders undercut workers’ rights—like those of Craig Campbell, a Perth teacher who lost his job due to his sexuality.

“Religious freedom” is nothing more than a smokescreen for homophobia, in a backlash against the progress made on LGBTI+ rights following the equal marriage vote. The same slogan was used in the US to roll back anti-discrimination law by bigots like Mike Pence.

The leaked Ruddock review into religious freedoms drew public condemnation when it recommended enshrining an Australia-wide standard allowing schools to discriminate based on sexuality and gender identity against students and teachers. One poll found 74 per cent of people opposed laws allowing discrimination, which already exist under federal law and in a number of states.

“Religious freedoms” are about protecting the freedom to discriminate, by constraining the already limited anti-discrimination law that exists.

However this is not enough for sections of the hard right. Coalition MPs Barnaby Joyce and Concetta Fierravanti-Wells, alongside religious hate groups and shock jocks, are pushing for a positive right to religious freedom that could extend legal protections for discrimination even further.

Ruddock’s proposal only gives the right to discriminate to religious educational institutions. Eric Abetz, the Liberals’ most distinguished homophobe, has argued that the right to “manifest one’s religious beliefs” should be extended, “not only to ministers of religion, but to all people of faith… business owners or individuals taking part in day to day life”.

The Liberals are split over how far to go. Attorney General Christian Porter plans to introduce an initial bill banning religious discrimination as soon as July. But the issues of discrimination against teachers and students have been sent to a further review by the Australian Law Reform Commission. It will not report until April next year.

Tragically, Labor’s new leadership are moving to soften their position against LGBTI+ discrimination, anxious about the federal election results. New leader Anthony Albanese has promised to “work cooperatively” with the Liberals on religious freedom, while front-benchers like Chris Bowen hope to bolster Labor’s acceptance of the “socially conservative”.

But accepting and promoting the idea that “the gay agenda has gone too far” in terms of anti-discrimination provisions will not help Labor. It was whispering mixed messages from either corner of Shorten’s mouth that helped lose the election. A repeat of this tactic on gay rights is a tragic mistake. If Labor stays silent while the conservatives wage concerted campaigns for “religious freedom”, it will be helping promote homophobia.

There can be no complacency for LGBTI+ activists. During the election campaign, Christian Schools Australia distributed 160,000 flyers in marginal seats attacking Labor for its promise to, “remove the exemptions that permit religious schools to discriminate against students and staff”. And one hate group, the Australian Christian Alliance, organised rallies for “religious freedoms” in no-voting electorates held by Labor in NSW, campaigning against LGBTI+ and abortion rights.

The modest mobilisations in Melbourne and Sydney calling for “no exemptions to equality” earlier this year were an excellent start in building the fight. But facing down a growing religious freedoms offensive will mean redoubling these efforts, and building on the solidarity developed in the marriage equality campaign.

This means opposing all “religious freedoms” scaremongering and the homophobia behind it, from Israel Folau to the Anglican school principals demanding the right to discriminate. This will help us build the fight against a Liberal government growing in confidence in its homophobia.