Saving capitalism from itself: lessons from Rudd’s GFC stimulus 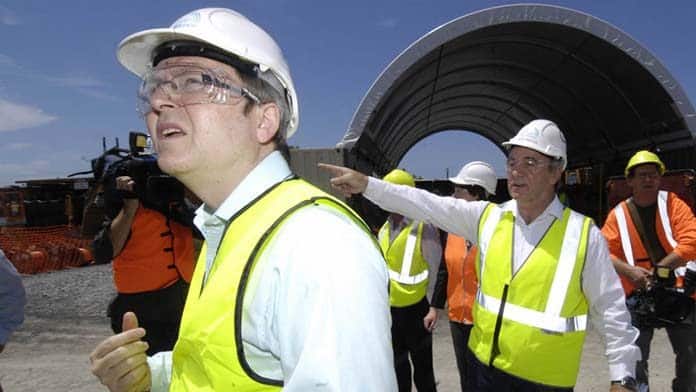 With the world facing the sharpest economic downturn in the history of capitalism, governments are turning overnight from neo-liberal budget-balancers to Keynesians on steroids. Trillion-dollar packages have been handed out to prop up businesses, and even pay workers’ wages. In Australia Morrison has already pledged an astonishing $320 billion, equivalent to 16.4 per cent of GDP.

In the face of the 2008 Global Financial Crisis (GFC) then Labor Prime Minister Kevin Rudd spent $75 billion, or 4 per cent of GDP, to stimulate the economy. Like now, Australia’s response to the GFC was part of a “Keynesian moment”, when neo-liberal governments of all stripes threw money into their economies to try to halt the global financial meltdown precipitated by the implosion of the US sub-prime property market.

The immediate nature of today’s crisis is different. Governments are actively suppressing some sections of the economy to enforce social distancing measures. Rather than “stimulate” economic activity, they are trying to keep capitalism on life support in the hope of a “v-shaped” bounce-back once the pandemic is over. At that point they will face the challenge they faced in the GFC—how to restore profitability and create the conditions for renewed capitalist investment.

In 2008, Rudd went harder and faster than many Western leaders. His package included infrastructure spending on social housing and school halls. Since then, debate around Rudd’s stimulus has been dominated on the one hand, by Labor’s claim that its programs kept Australia out of recession, while, on the other, the Liberals have pilloried Labor over the “rorts” associated with the programs, and attacked Rudd and Wayne Swan for pushing the budget into deficit.

The centrepiece of Rudd’s stimulus was the $42 billion Nation Building and Jobs plan, released in February 2009. The Plan included immediate cash payments of $950 to welfare recipients, pensioners and students, similar to the $750 payments Morrison announced in his first package on 12 March.

Each element of Rudd’s plan was designed to hold up sections of business that were faltering. After the cash payments designed to inject money into the retail sector, there were programs like building school halls and the fatal “home insulation program” that gave quick work to construction companies and some manufacturers. Finally there was money for longer-running infrastructure programs such as building social housing and roads and bridges.

Compared to Obama and many other Western leaders, who responded to the crash of 2008 by spending billions bailing out the very banks that had caused the crisis, Rudd’s stimulus seemed to benefit the community while stimulating demand. In a pretentious 8000 word essay in The Monthly, Rudd portrayed his program as a break with neo-liberalism and a return to real social democracy. Many unionists and activists drank the Kool-aid and thought the days of market fundamentalism were over.

But Rudd’s programs, like Morrison’s this time, were all designed to be temporary. The government would fill the chasm created by the market so that business could spring back to life and take all the gains. Every aspect of the stimulus was delivered by private corporations. Rudd refused to reverse the privatisation and corporatisation of public service to increase public ownership and control—capacity that could have been used to solve the climate crisis for instance.

Rather than re-create a public works workforce to build school halls or social housing, Rudd wrote blank cheques to major construction companies like Bovis and Lend Lease. The Home Insulation Program was even worse. Rudd threw delivery of the program open to the market by offering payments to any shonky start-up that wanted them. Call centre operators cashed-in by sending untrained back-packers into people’s roofs. Heat stress and electrocution killed four young insulation workers; there were hundreds of house fires.

Labor can rightly claim some credit for keeping Australia out of recession. But the fact that the Chinese government spent 12 per cent of GDP building entire cities probably had a bigger impact on the Australian economy, by increasing demand and prices for Australia’s mineral exports.

As Rudd’s programs wound down, it was back to “business as usual”. Construction workers went back to building private apartments as Rudd re-kindled the property market. The social housing was given to “community housing providers” as collateral for bank loans. The cash payments ended up boosting the profits of retail bosses and the home insulation program disappeared without a trace. Neo-liberalism snapped back as Labor and Liberal governments went back to cutting services to maintain balanced budgets.

In his own words, Rudd wanted to save capitalism from itself. Twelve years after the GFC, capitalism has plunged into an even deeper crisis. Suddenly the normal austerity economics is being suspended as bosses demand state support to survive.

But as Morrison signed a cheque to fund free childcare he insisted, “This is only temporary”. He expects to take back the increased dole payments and the wage subsidies for casuals too. Private hospitals will keep getting government subsidies while public hospitals are cut.

We can’t afford to go back to business as usual. The crises of aging capitalism get ever deeper. We will need to fight Morrison to keep the increased dole, the free childcare and the rights for casuals.

The government funding of childcare centres, private hospitals, airlines and wages for millions of workers shows the possibility of nationalising industry and creating a system geared to meet the needs of ordinary people. But to do that we need to permanently take control of society out of the hands of the profit-mongering corporations and the governments that serve them.