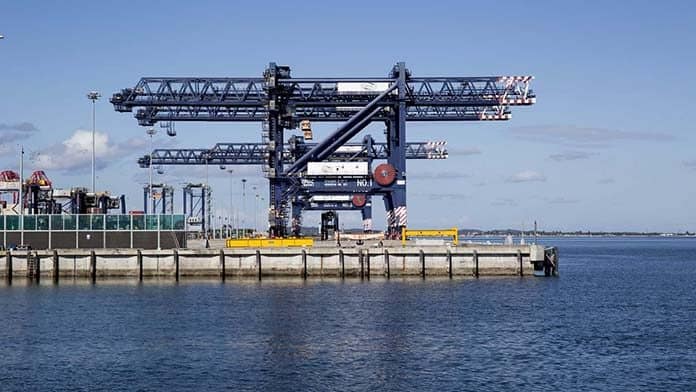 Profits are being put before safety and lives at Hutchison Ports’ Sydney terminal, where two employees have now tested positive for COVID-19.

On the morning of 3 April, the company was informed that an employee had tested positive for the virus.

Rather than informing the union and the workforce of the potential risk, the company has engaged in a disgraceful cover-up.

The bosses kept the first case hidden from the workforce so they could get a ship loaded as fast as possible. The vessel sailed in the afternoon of 3 April. It wasn’t until the ship was lashed, and most wharfies had gone home, that a memo was sent to the workforce.

This deliberate delay kept dozens of people interacting with each other, the worksite and the crew of the ship, potentially further spreading the virus.

Maintenance crew working that night were not cancelled until after the shift commenced. The company then claimed that maintenance workers were not exposed because they work in a separate shed, although they share entry and exit gates, attend breakdowns and fix machinery.

The company has rejected the MUA’s requests to assist with tracing workers who may have been exposed and has excluded the union from any investigation.

Since the beginning of the coronavirus pandemic, Hutchison has shown contempt for workers’ safety.

The workforce of around 250 has a high level of rotation through machines, and shared change rooms, bathrooms, and kitchen. The virus can survive on some surfaces for days.

Union delegates identified more than a month ago the need for serious reorganisation of work practices to maximise “social distancing”, thorough and consistent cleaning, protective equipment, and paid special leave.

But outrageously, Hutchison responded by making some changes conditional on the union dropping all protected industrial bans on overtime and upgrades that were in place as part of stalled Enterprise Bargaining Agreement (EBA) negotiations. They turned the risk of COVID-19 into a bargaining chip.

There are six shifts identified in which the COVID-19 positive worker was at work before being contacted by NSW Health on 1 April, to notify them of possible exposure. For some of this time, there was not even hand sanitiser available in the workplace.

On 2 April, Hutchison finally agreed to some of the delegates’ important safety measures proposed—because it seems they knew of the potential for infection, but the rest of the workforce did not.

Management have consistently downplayed the number of people at risk, claiming that only 17 people have been in close contact with the first positive case. These workers have been instructed to self-isolate by NSW Heath on the basis of this information. But the company’s claim to have “detailed analysis” of who is at risk is farcical.

Anyone who has been in the workplace during the six shifts may have contracted COVID-19. Many more have notified the union that they may also be close contacts. A second wharfie has now been revealed to be positive for COVID-19. It is not yet clear whether more workers may have been exposed to the second case.

Wharfies rostered to work on Monday 6 April were expected to comply with all the company’s work orders. The company have not even offered exemptions to employees with underlying health risks. But MUA Health and Safety Representatives have put a “cease work” order on the company. For now, this means that the workforce can stay away and should not lose pay.

Hutchison wharfies must prepare to fight hard for safety measures regardless of whether the cease-work is upheld. The MUA has independent medical advice that all workers in contact with the terminal from 24 March should self-isolate for 14 days from their last contact—and everyone must get tested for COVID-19 and be medically cleared to return to work.

Hutchison has agreed that the small number of workers identified as “close contacts” will be paid discretionary leave for their time in self-isolation. This must be extended to the entire workforce.

While the general population is under threat of massive personal fines for meeting in groups greater than two, the criminal behaviour of bosses is not being policed.

Maritime workers want to keep essential goods moving, but Hutchison wants to keep terminals in operation, to keep their profits moving. The bosses can’t be trusted. There must be exemplary safety standards on the wharves.

The fight at Hutchison for mass testing of the workforce, special paid leave for all, strict cleaning measures, PPE and reorganisation of work to allow “social distancing” is crucial. Every worker and every community member at risk from coronavirus has a stake in this fight.

By an MUA member