Strikes in a time of pandemic: The 1919 seafarers’ strike 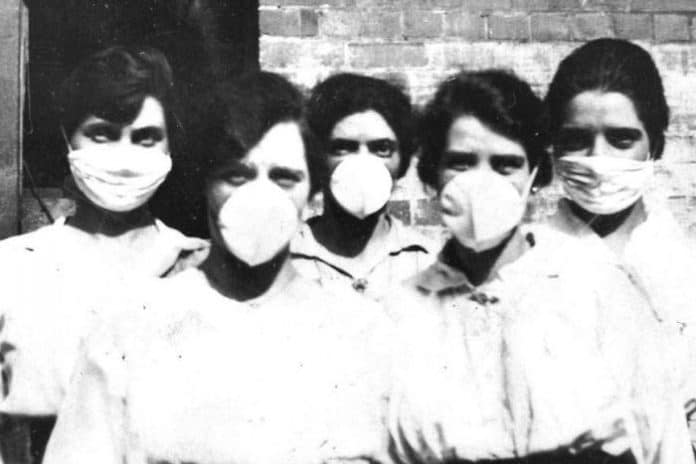 Almost exactly 101 years ago, the first great pandemic of the twentieth century struck Australia. In 1919, the Spanish flu, as it was called (although it almost certainly originated among US soldiers who then took it to Europe) broke through Australia’s maritime quarantine. These restrictions had been imposed in October 1918, as the flu swept the rest of the world.

The first recorded case was on 9 or 10 January in Melbourne. By 21 January the flu was in Sydney. On 29 January, the Queensland border was closed, but by 3 May, the flu was in Brisbane among laundry workers at Kangaroo Point.

Globally between 50-100 million were killed by the flu, as it spread globally in early 1918, the last year of the First World War, from the US and Europe, and then to Africa, India and Asia by the middle of the year.

Between 1919-20, it is estimated that up to 15,000 died in Australia. Unlike the coronavirus, the flu disproportionately struck down fit, young adults aged 20-40. A third of the deaths in Australia were of people aged between 25 and 34. The Spanish flu infected around two million Australians in a population of about five million. In Sydney alone, 40 per cent of residents were infected.

The biggest strike of 1919 was the Seamen’s Union strike between May and August. While pay and conditions were central to the strike, it was also a strike directly concerned with the risk that influenza posed to seafarers.

The 1919 strike is usually celebrated, for good reasons, as a successful strike against arbitration, the national industrial court system, first established in 1904. The Commonwealth Arbitration Court was the equivalent to today’s Fair Work Commission, giving power to the state to enforce agreements and impose settlements on industrial disputes that were usually favourable to the employers.

Arbitration was opposed by socialists and bitterly resisted by many unions. For three months the seamen defied Federal government attempts to force them into arbitration despite the national secretary, Tom Walsh, being jailed in July.

Seafarers were angry that the December 1918 Award, struck by the federal arbitration court, ignored any comparison with the better conditions of other international merchant navies. The seafarers wanted 14 pounds, plus three shillings for overtime and payment for Sundays at sea. They demanded improvements to the appalling food and accommodation conditions they endured on the ships.

But the Award set wages at just 12 pounds, five shillings. There was also outrage that as soon as the war had ended, the government had reneged on its promise to pay the seafarers a war bonus.

With influenza already claiming lives in the port cities, the seafarers also demanded sick pay, payment for any time a ship was quarantined and life insurance to provide for their families if they were killed by the flu.

On 8 May, an appeal by the Seamen’s Union against the Award was ended by ship owners and the government controller of shipping declaring that there could be no wage increases without a federal investigation. Seafarers in Queensland began walking off the job. For the first ten days the strike was confined to Queensland, but then spread to New South Wales and Victoria on 20 and 21 May.

Coastal shipping was the main way goods were transported in those days, and the effects of the strike were soon being felt across the country. Many towns, particularly those furthest from the state capitals, began running short of supplies quite quickly. To get aid to those cities, Queensland union seafarers offered to crew relief ships chartered by Queensland’s Labor government, as long as they were employed under the same conditions that the state government had agreed with the wharf labourers—conditions that included life insurance against influenza and the pay increase the seafarers were demanding.

The Queensland government quickly requisitioned the steamship Allinga which left Brisbane on 21 May with 1000 tons of food and goods for Mackay, Bowen, Townsville and Cairns.

As the effects of the strike spread, by 23 May 4000 workers in Victoria were stood down. By the second week of June that number had reached 32,500 (including 8000 women workers, 1300 of them from the confectionary union). Some employers seemed to be deliberately standing other workers down to pressure the seafarers to return to work.

After a compulsory arbitration conference on 29 May, the union reluctantly agreed to a secret ballot on accepting a return to work and the arbitration of outstanding issues. The ballot was overwhelmingly rejected by a massive vote of over 4000 to 18.

The dispute grew increasingly determined. On 17 June, Brisbane seafarers’ delegates reported to a mass meeting, “If we are pledged, as we deem we now are, to a policy of direct action, we should remove ourselves from the jurisdiction of the Arbitration Court by deregistering the union and resort to the methods which existed prior to our registration. This is the only honest and proper course and the only one open to us at present. With regard to sending the men back to work defeated we will never be party to that.”

On 23 June, around 2000 unemployed workers in Melbourne marched from Trades Hall to the Federal Parliament House (which was then in Melbourne) demanding relief payments. A week later, after a state Labor MP led a second unemployed march to the office of the Victorian Premier, the Federal and state government each made payments of 1000 pounds for unemployed relief.

In July the conservative Nationalist Federal government (with notorious pro-conscription Billy Hughes as Prime Minister) used section 6 of the Arbitration Act to try and force the union into arbitration. But the union’s secretary, Tom Walsh, refused to appear. He was subsequently fined 200 pounds in the Magistrates Court.

Then, after police noted Walsh’s defiant speeches, on 22 July, Walsh again refused the summons to the Arbitration Court. This time he was jailed for three months. Walsh issued a statement from jail asking members, “not to let their consideration for me stand in the way of getting justice for themselves and their families.”

On 11 August, the Queensland government ordered the requisition of all flour in the state. A telegram from the chair of Hinchinbrook Shire in Ingham was read to the Federal parliament on 13 August: “No flour procurable here, other foodstuffs almost exhausted, general isolation hospital here full of influenza patients…”

But behind the scenes the government was cracking. By mid-August it had conceded the seafarer’s demands, although there was no immediate return to work. As discussions over the final details dragged on, some of the union branch meetings expressed their concerns that Walsh was still in jail and that the agreement made no reference to the future role of the arbitration commission.

On 25 August, the Sydney branch voted 3000 to 26 to accept the government’s offer. The next day Brisbane and Melbourne voted for an immediate return to work. Wages were increased 35 shillings a month above the 1918 award; leave arrangements were improved, sick seamen were paid until they arrived in their home port. (It wasn’t until 1935 that one week’s sick pay was introduced into other industrial awards.)

The owners agreed to provide bedding (without sheets) and improve what had been disgusting accommodation conditions. Of all the original demands, however, life insurance and reduced hours were not won.

Walsh was released from jail in September.

While the seafarers went back to work, the other great strike in 1919, of Broken Hill miners that had also began in May, did not end until November 1920. While flu ravaged Broken Hill, the miners’ 18 month struggle won the first 35 hour week in Australia and major improvements in health and safety, in a dangerous industry where accidents, lead poisoning and dusted lungs had sent many miners to an early grave, as certainly as the flu. But that’s another story.

In 1919, just like today, the issues of health and class were interlocked. The seafarers fought for sick pay against bosses and a government that were more concerned with maintaining their profits than with workers’ lives.

In 2020, in many industries, workers are faced with bosses and the government denying them the paid time off needed to keep workers and the wider community safe from COVID-19. Workers organised by the United Workers Union have been forced to walk off the job to get proper safety measures in warehouses running at full tilt to keep the supermarkets stocked. The industrial power seafarers used in the bitter struggle of 1919, will be needed again.