Vaccine inequality produces surge in deaths across Africa and Asia 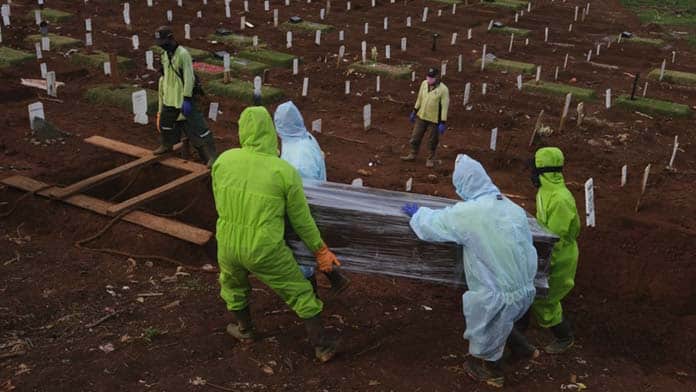 The Delta variant is leading to a new surge in COVID infections worldwide. But with so few vaccinated in the Global South, many countries are seeing an appalling—and largely unnecessary—surge of deaths.

In the rich countries of Europe, the UK and the US the impact of vaccination is already obvious.

Although the UK saw a spike of cases from June reaching over 50,000 a day, deaths were far lower than in previous waves. Nearly 90 per cent of the adult population has now had at least one dose of vaccine.

“Vaccine inequity is the world’s biggest obstacle to ending this pandemic and recovering from COVID-19,” Dr Tedros Adhanom Ghebreyesus, Director-General of the World Health Organization (WHO), has admitted.

Africa recorded its highest ever number of deaths in the week ending 1 August, with 6400 dying across the continent, an 80 per cent increase in the last month.

In South Africa over 200,000 people are estimated to have died so far. There has beenserious rioting driven by hardship as a result of the outbreak.Vaccination has only just started to ramp up, with around 13 per cent vaccinated, coming too late to stop the current surge of Delta infections and deaths.

More vaccine doses have been wasted across the US in pharmacy chains than most African countries have delivered—around 180,000. Countries including Chad, Sudan and Benin have not even been able to vaccinate frontline medical staff.

Enough doses to vaccinate 13 million people are about to expire in stockpiles across the US. “We’re drowning in this stuff,” Robert Ator, a retired colonel in charge of vaccine distribution in the state of Arkansas told STAT News. “It’s starting to get a bit silly”.

Rich countries including Germany, the UK, France and Israel have already announced plans to deliver booster shots from September, through third doses to those already fully vaccinated. Scientists say there is no evidence these are even necessary yet.

Vaccine hoarding has seen developed nations including the US, Canada, the EU and Australia secure enough doses to cover their population four times over by the end of the year. The US is likely to produce 4.7 billion doses this year, four billion more than it needs.

The decision to leave vaccine production and development in the hands of the multinational pharmaceutical giants has seen them put profits ahead of need.

Pfizer has allocated just 11 per cent of its deliveries to low and middle income countries, and Moderna 0.3 per cent, according to Medecins Sans Frontieres. The two companies estimate they will earn $35 billion and $26 billion this year respectively from sales of their vaccines.

Many poor countries, unable to afford the hundreds of millions of dollars demanded by big pharma, have relied on the Covax initiative, a global vaccine sharing effort supported by the WHO.

But Covax was thrown into chaos after India banned the export of vaccines during its devastating outbreak earlier this year. The program was relying on Astra-Zeneca vaccines produced there by the Serum Institute of India, the world’s largest vaccine manufacturer.

Covax aimed to secure enough vaccines to allow every country to vaccinate 20 per cent of its population—enough to protect hospital staff and those most at risk of dying. It wants to supply almost two billion doses by the end of this year. But Covax admits that deliveries in July and August will be “very lean”. So far only 195 million have been distributed.

World leaders from the developed countries are promising donations to fill the gap.

But instead of working on the basis of need, the drive for imperialist influence is dictating where vaccine donations go. US efforts are being shaped by competition with China.

After its immediate neighbours Mexico and Canada, the first places to benefit in initial shipments from the US in June were South Korea and Taiwan, with 3.5 million doses between them. Both are among the richest nations in Asia, but also sit on China’s doorstep. Taiwan also received 1.24 million doses from Japan in early June.

The race for global influence has meant that the US, China and Russia all produced competing vaccines, instead of co-operating to determine which vaccines were most effective, and then working to produce them on a mass scale.

There has been a global outcry demanding the waiver of patents that allow the pharmaceutical giants to control vaccine manufacturing.

Back in May US President Joe Biden declared his support for a waiver, in order to allow other countries to produce cheaper versions of the successful vaccines.

But this was little more than a publicity stunt. The US has refused to pressure the EU to do the same. And unless the pharmaceutical companies are forced to share their technology and production techniques, waiving patents will do little to speed up vaccine manufacturing.

The Delta strain is also wreaking havoc across Asia. Myanmar is facing social collapse with an outbreak following the military coup, with estimates half its population of 54 million may be infected within weeks. Reports of over 300 deaths a day are widely acknowledged as an undercount.

In Indonesia, hospitals are collapsing under the strain. Many have died at home after hospitals were unable to admit them. Just 9.5 per cent of the population have been fully vaccinated.

Deaths among doctors have been the highest since the beginning of the pandemic. In total 114 doctors died in the first few weeks of July. Almost all Indonesia’s doctors have been vaccinated, but the Sinovac shots they received have been less effective than the Pfizer or Moderna doses used in Europe and the US.

Chinese-made Sinovac, while highly effective against severe disease, is only around 50-60 per cent effective against developing lower level illness. A new study has shown that the antibodies it generates also decline to below detectable levels within six months, meaning a booster shot is necessary.

With the virus under control at home until recently, China has been able to become the world’s largest exporter of vaccines, claiming to have exported 250 million doses by May. But the logic of competition means it has not been able to mass produce the more effective mRNA vaccines developed by pharmaceutical companies in Europe and the US.

The hoarding of vaccines also puts people in the developed nations at risk. Until the pandemic is under control everywhere, the risk of new variants emerging will remain. These could trigger new waves of the pandemic globally, potentially even among the already vaccinated.

As the WHO chief wrote, “Vaccine nationalism is not just morally indefensible”, it’s also “self-defeating” and “counter-productive”. But the global vaccine inequality is squarely a product of capitalism—and the system’s priorities that put competition and profits before human health.