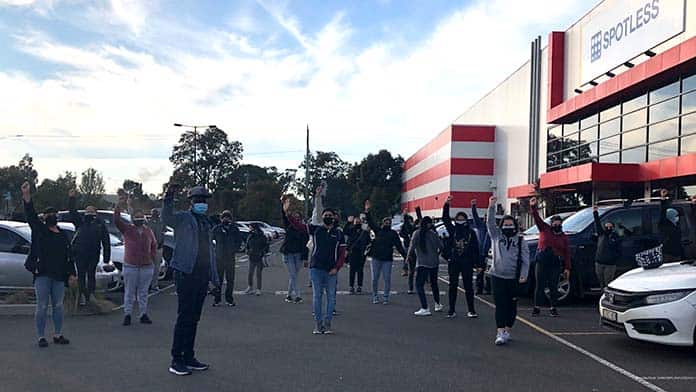 Workers have been forced to take safety into their own hands at a series of workplaces across Melbourne, after their employers refused to take COVID-19 infections on site seriously. Since May, 80 per cent of all cases in Victoria’s outbreak have spread in workplaces, yet companies continue to put profit above workers’ health.

In a number of workplaces, union-organised cease works have forced companies to close or implement improved safety measures.

In late July, workers at a Spotless laundry in Dandenong walked out in response to concerns about the company’s handling of three positive cases on site. The company tried to keep the site operating, saying only a small number of workers were at risk and needed to stay home. Spotless even went to the Fair Work Commission to try to force everyone else back to work.

But it had to back down and shut the workplace after the Department of Health and Human Services ruled that any worker who had spent more than 30 minutes on site since 6 July would need to get tested and quarantine for 14 days.

Spotless workers’ action won them paid pandemic leave at a minimum rate of a $150 a day for full-time, part-time, and casual workers, as well as paid leave for the days they refused work due to unsafe conditions, according to the United Workers Union (UWU).

Over 60 workers at the Mitre 10 distribution center in Derriment in Melbourne’s west ceased work on 10 August after a COVID-19 case on site and won important health measures, their union, the UWU, reported. These included leave for workers at the site to get tested, a ban on working on more than one shed at the site (to decrease the risk of cross contamination), one separate set of equipment per person, and a commitment from the company to involve health and safety reps in determining contact tracing in future.

Abattoirs have seen some of the largest clusters of cases, but bosses have tried to cut corners on safety even here. Workers at Diamond Valley Pork in Laverton refused to go back to work in early August after their employer tried to reopen the abattoir before results of their second COVID-19 test were in. The site was initially closed after 22 workers tested positive to the virus. According their union, the AMIEU, there were also concerns, “in relation to the deep cleaning process being potentially jeopardised, by staff who reportedly remained on site throughout the closure”.

More than 50 cold storage workers also walked off the job at the JBS Brooklyn abattoir, demanding more safety measures over two weeks after the site was originally ordered shut following an initial 71 positive tests. The workplace is now closed indefinitely with over 145 cases among the workforce.

Hundreds of liquor distribution centre workers in Laverton walked off the job on 3 August after their billion dollar employer, Woolworths, continued operations following a positive COVID-19 test. They went back to work after the company agreed to have a hygienist oversee deep cleaning on site, according to The Age. Workers have also ceased work at the Kmart distribution center in Truganina on the outskirts of Melbourne after a positive case there.

Casualisation and insecure work have been a major factor in the spread of the virus. But the Victorian and federal government paid pandemic leave on offer is nowhere near enough. Workers need paid leave at their existing rates of pay, and a guarantee they will not lose shifts if they stay away from work when sick. Workers’ collective action, through walking off the job if necessary, has the power to force employers and the government to take our health seriously and deliver these rights.