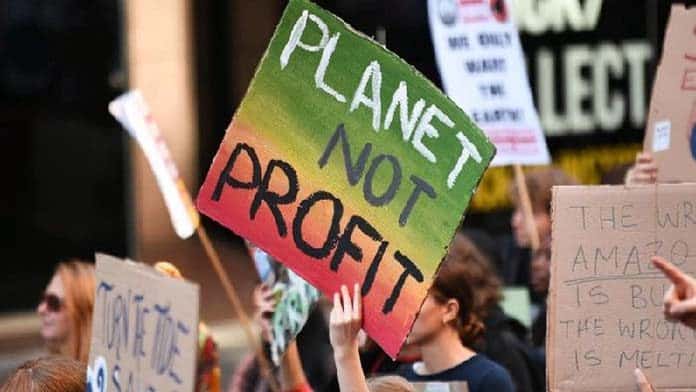 Despite the need for urgent and systemic change to avert climate catastrophe, the global political economy is shifting at a snail’s pace.

The World Meteorological Organisation (WMO) predicts temperature rises of between 2.9 and 3.4 degrees by 2100 compared to pre-industrial levels, if climate action doesn’t escalate.

The world is already experiencing the effects of anthropogenic climate change: the fires in the Amazon, Queensland and NSW, alongside Hurricane Dorian in the Bahamas are only the latest examples.

The September Global Climate Strikes mobilised millions of students and workers across the world to demand climate action.

Some business leaders, like Atlassian boss Mike Cannon-Brookes, encouraged their staff to attend the strikes, even giving them paid leave to attend.

In the face of the failure of Prime Minister Scott Morrison and governments to act, many have looked in desperation to business leaders for a solution. Cannon-Brookes has echoed this sentiment, saying business must, “step up and try to solve this problem.”

In August the Business Roundtable released a “statement on the purpose of a corporation” signed by 181 American CEOs.

The statement replaced the Business Roundtable’s longstanding principle of “shareholder primacy” with “a fundamental commitment to all our stakeholders,” including the environment.

Business leader and proponent of stakeholder capitalism Marty Lipton told the Financial Times, “I put forward my ideas of stakeholders to save capitalism—not destroy it. But if we don’t act now, I don’t think that capitalism will be around in the next 50 years.”

Similar rhetoric is employed by a movement of “socially responsible” businesses called B Corps. Its website describes B Companies as “a new kind of business that balances purpose and profit.” B Corps like Patagonia and Ben & Jerry’s supported the climate strike.

But the idea that companies could give equal consideration to profit and “purpose” ignores the fundamental dynamics of capitalism.

Transforming companies to strip out fossil fuels would come at a significant cost. Businesses that subordinate profits to reducing their emissions would be undercut by competitors able to produce and sell their goods more cheaply, and would soon go out of business.

As even the pro-business The Economist admits, “What the world has not yet seen is a situation where ESG (environmental, social and governance)
issues come into material, systemic conflict with profits. Purpose is flavour of the month, says Stephen Bainbridge, professor of law at the University of California, Los Angeles, ‘but are companies really going to give shareholders a 10 per cent haircut for the sake of stakeholders?’”

Some companies argue that there is a growing market for green products, and that zero carbon energy sources like solar and wind power can be profitable.

Co-founder of B Lab, Jay Coen Gilbert argues that B Corps, “will outcompete in a marketplace that increasingly values an authentic commitment to purpose.”

But these companies are selling to a small niche market of consumers who are willing to pay higher prices for “ethical” products.

Bosses like Cannon-Brookes may be sincere in their concern about climate change. But they are part of a small minority of companies who have a business advantage in speaking out on climate.

As John McDuling wrote in the Sydney Morning Herald, “The company is battling other tech firms to hire software developers, who tend to be well grounded in scientific concepts, and politically progressive people. Software developers, IT help desk staff and knowledge workers more broadly are also Atlassian’s target customers.”

This point was illustrated by the impressive turnout of IT workers at the Global Climate Strike, especially in the US, where thousands of workers from Google, Facebook, Microsoft and Twitter joined the strikes.

Worse, the claims of many of these supposedly environmentally friendly companies are simply marketing spin.

For years BP marketed itself as going “Beyond Petroleum”. But it closed its BP Solar division in 2011 and didn’t buy back into solar power until 2017, with a $200 million investment. This pales into insignificance next to its $19 billion in fossil fuel income last year.

Burning fossil fuels is still highly profitable, so as long as businesses are allowed to invest in it, they will. From the point of view of individual companies this is a rational approach because it makes them money. But its irrationality from the point of view of people and our planet is shown by the rush of oil companies to exploit arctic oil reserves made more accessible by melting ice.

Despite slightly increasing investment in renewables, the world’s top 24 publicly-listed companies spent just 1.3 per cent of their budgets on low carbon energy in 2018, according to one study.

But there are trillions of dollars worth of investments in fossil fuels that will have to be written off, in order to stop carbon emissions and replace them with publicly-owned renewables.

Beyond fossil fuel companies, the vast bulk of the economy depends on fossil fuels because they are built into the structure of capitalism. Firms in manufacturing, packaging, transport, clothing and agribusiness all rely heavily on fossil fuels due to their use in everything from fertilisers, pesticides and plastics to synthetic fibres in clothing.

At the United Nations climate forum in New York Cannon-Brookes pledged to dip into his own pockets to bankroll SunCable, a $25 billion solar export project in the NT.

But the investment in renewables that we urgently need can’t rely on the private sector, which will only invest if there’s a profit to be made.

Profit margins in the solar industry are tight due to increasing competition and falling manufacturing costs. This has led to investment in solar flatlining.

The falling cost of solar should make it easier to build renewables. But due to competition and the need for businesses to make a profit, we’re seeing the opposite.

The fragmented, piecemeal approach of the private sector won’t deliver the mass investment in renewables we need in time to avoid catastrophic climate change. And carbon-neutral pledges by climate capitalists won’t cut it either.

The scale of the climate emergency we face requires radical change to decarbonise the economy and create millions of secure and well-paid climate jobs.

To win this we need mass strike action by workers to win public investment in renewables and to keep fossil fuels in the ground. This means winning the right to strike and strengthening the power of workers against bosses. It also means fighting for demands that make life better for working class people and are capable of winning their support. But this approach will be resisted by business leaders.

Capitalist solutions to the climate crisis are designed to make the working class pay. For example, an Adelaide waste management company wants the ability to fine residents who use their recycling bins wrongly after “three strikes.”

The International Monetary Fund released another paper in October claiming that carbon taxes are the most efficient way to cut emissions—despite the fact that there are deeply unpopular because they force the cost of action onto ordinary people.

Paying for the investment in renewable energy, public transport and other changes we need requires taxing the rich to fund the transition to a clean economy. This means using the enormous wealth of people like Cannon-Brookes to fund publicly-owned renewables projects. Even supposedly climate-friendly businesses won’t support this.

In the early days of the protests in Hong Kong some business leaders joined the marches. Business people might have been able to support a movement that defended Hong Kong’s “rule of law.”

But the Hong Kong ruling class do not support the kind of action that is necessary to win greater democracy in Hong Kong, let alone a movement for a redistribution of wealth and power in society.

Just as Hong Kong’s rulers are inextricably tied to China’s ruling class, most big “climate capitalists” are also deeply invested in the fossil-fuelled status quo. They will oppose taxing the rich to fund publicly-owned renewables.

How supportive of radical change could business leaders like Cannon-Brookes be when his company depends on customers like BP, NASA, BAE systems and the US Department of Defense?

If the movement is going to win a safe climate it will require workers striking against fossil fuel capitalists and climate capitalists alike.

Unsurprisingly, when Atlassian encouraged staff to attend the climate strike, it cautioned, “Let’s be really, really clear: We’re not striking against Atlassian!”

Workers going on strike is the most powerful weapon the climate movement has to bring about the changes we need. When workers stop work, the ruling class is unable to continue making profits.

It’s through mass actions like strikes and protests that workers and students can force the ruling class to take serious climate action. And such a movement could also go further, to create a society where planet and people come before profit.