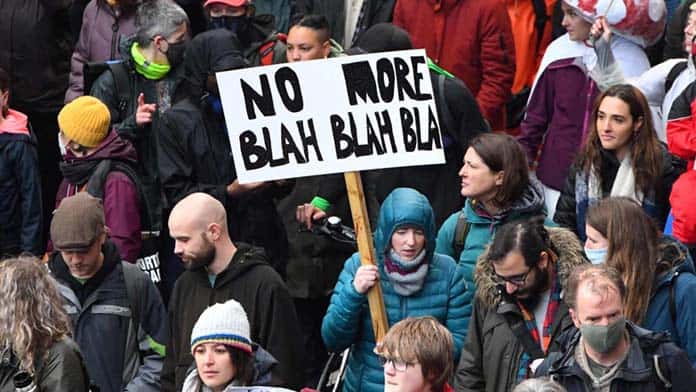 The world is on a “highway to hell”, the UN’s Antonio Guterres warned as world leaders began gathering this month at the COP27 climate talks in Egypt.

But anyone concerned about the climate catastrophes already unfolding should not hold their breath for any serious progress from the talks.

Since the first COP in 1995, global emissions have increased by 55 per cent. Last year’s COP26 summit was promoted as the one that would finally fix the problem—but it failed.

Instead coal use has surged across Europe as the war in Ukraine leads to a scramble to replace the gas previously supplied by Russia.

At the 2015 climate talks in Paris, 193 states, plus the EU, agreed to enact plans to limit global warming to “well below” two degrees and “ideally” below 1.5 degrees. The Intergovernmental Panel on Climate Change (IPCC) says that 1.5 degrees is the maximum average global temperature increase if the world is to avoid irreversible and catastrophic climate change.

But as of this month, 167 of the Paris Accord signatories had still not adopted emissions reduction targets to keep warming below two degrees. In fact, according to the UN Climate Change Commission, current commitments will increase emissions by 10.6 per cent by 2030, compared to 2010 levels.

This will mean a horrifying 2.5 degrees of warming by the end of the century.

Australia is one of only four countries that have increased their emissions reduction targets since COP26 last year.

Yet the Albanese government’s target of 43 per cent by 2030 is still woefully inadequate. It relies on a dodgy emissions trading scheme that effectively allows polluting companies to buy their way out of reducing emissions. And Albanese is supporting a series of new fossil fuel projects, like the Scarborough gas project in WA and Middle Arm gas hub in the NT, that will make it nearly impossible for the government to meet its own target.

A major focus of COP27 is the climate aid funding wealthy nations promised for the Global South. Desperate appeals in recent years from the leaders of the worst affected countries, such as Tonga and Kenya, have been all but ignored.

The $US100 billion a year pledged at Copenhagen in 2009 has never been delivered, despite climate disasters in the South becoming more frequent and more severe.

East Africa is suffering a devastating drought, with 22 million people across Ethiopia, Somalia and Kenya at risk of starvation. Record-breaking floods this year left one third of Pakistan under water.

But Oxfam has argued that after factoring in “dishonest and misleading accounting” climate aid from wealthy nations amounted to only $21-24 billion in 2020. And while US President Joe Biden last year promised $11.4 billion before 2024, the US Congress approved just $1 billion this year.

Egypt’s military dictator Abdel Fattah El-Sisi, who enjoys military and economic support from the West and Israel, is using the conference to try to greenwash his murderous regime.

COP27 is being held in Sharm El-Sheikh, a resort town on the Red Sea that is surrounded by a three-metre-high concrete wall designed to keep ordinary Egyptians and any protesters far away from proceedings. Participants at the conference are subject to intense surveillance by Egyptian intelligence and local NGOs and civil society representatives are forbidden to speak about the human rights abuses and environmental destruction carried out by the government.

Official promotions for the event depict cheerful-looking Egyptian men drinking from reusable straws and driving electric cars to the beach, an image wildly out of step with the lives of millions of impoverished Egyptians. Egyptian democracy activists have called on the climate justice movement to boycott the conference.

Around 60,000 political prisoners are still behind bars following the 2011 revolution and more recent protests. Since El Sisi’s military coup in 2013, his regime has carried out torture, extrajudicial killings and enforced disappearances on a massive scale.

One imprisoned activist, Alaa Abd El-Fattah, is on the brink of death after being on hunger strike for six months. Despite also holding British citizenship and a high-profile international campaign, the UK government has done nothing to secure his release.

COP27 is unlikely to offer anything in the way of real change. The most we can expect is more platitudes from global leaders and more of what Greta Thunberg calls “blah blah blah”.

It is going to take mass campaigns in Australia and across the world to force a transition away from fossil fuels and win justice for the millions of people threatened by the consequences of climate change.