9/11 horror triggered new wave of US terrorism and war 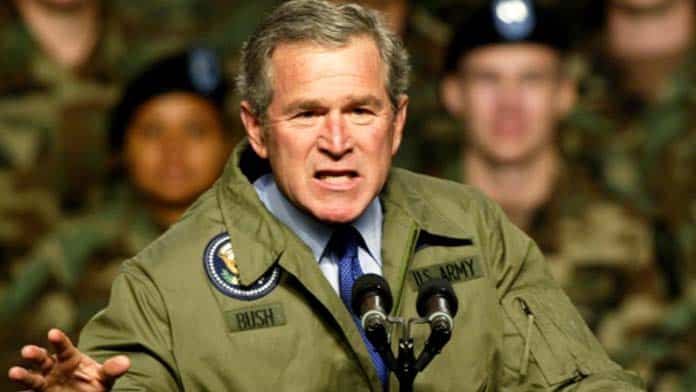 Western leaders often declare that the world changed forever on 9/11. The terrorist attacks in New York and Washington caused incredible shock and killed around 3000 people. But what 9/11 represented more than anything was the violence the US had inflicted worldwide for decades coming home.

The US response was to launch further conflicts as part of a “war on terror”. Alongside this came a frenzy about the supposed threat from “Islamic terrorism” that created a new wave of racism against Muslims and Arabs.

Twenty years on, the lead-up to the anniversary was marked by a further humiliation for US imperialism. As it retreated from Afghanistan, the government it had installed disintegrated.

This symbolised the failure, as well as the bloody cost, of the wars the US launched after 9/11. The Australian government was an enthusiastic backer as the only country apart from the UK to send troops as part of the invasions of both Afghanistan and Iraq.

As the dominant global military power after 1945 the US took upon itself the right to rain destruction on any country that stood in its way. In Vietnam it killed three million people, including through indiscriminate “carpet bombing”. In 1991, when it invaded Iraq for the first time, it killed over 100,000 civilians and military conscripts. Then it bombed the country virtually every day for the next 12 years. US sanctions on basic medicines killed more than half a million children.

The US fuelled other wars through funding armed groups to destabilise governments it disliked, including the death squads unleashed on central America like the Nicaraguan Contras.

Academic Chalmers Johnson described the 9/11 attacks as “blowback” from the history of US intervention globally. Osama Bin Laden, who staged the attacks, had begun his career with the Afghan mujahideen fighting the Russians—another operation the US funded.

In 2001, Al Qaeda struck at symbols of American power, in New York’s financial centre and the Pentagon building. The US wanted revenge.

Its first target was Afghanistan, where it accused the Taliban of harbouring Bin Laden and his network. The Taliban were toppled after 72 days. Around 1000 civilians were killed by US bombs and up to 20,000 died from displacement and starvation.

US President George W Bush moved quickly to launch another war against Iraq. His officials had discussed invading Iraq in the days following 9/11, debating how to link Iraq’s President Saddam Hussein to the terrorist attacks. Millions saw through the lies that Iraq possessed “weapons of mass destruction”, with an enormous worldwide anti-war movement.

The Bush administration saw 9/11 as an opportunity to cement US global dominance for decades to come. Key figures including Vice-President Dick Cheney and Defence Secretary Donald Rumsfeld were part of a gang of Republican Party figures associated with the think-tank Project for a New American Century. They argued that the US needed to use its military power more aggressively to ensure it could never be rivalled by a potential competitor.

This was echoed in the Bush administration’s National Security Strategy document which endorsed unilateral US military action in order to “dissuade potential adversaries from pursuing a military build-up in the hopes of surpassing, or equalling, the power of the United States”.

It was a response to growing US weaknesses. After the Second World War the US economically dominated the world, with half of global manufacturing. Today it has declined in relative terms, commanding about a quarter of global production and rapidly losing ground to China.

But the US gamble on using its military strength to bolster its position has backfired disastrously.

The US strategy showed the continuation of imperialism in the 21st century.

The classical Marxist theory of imperialism, produced to explain the First World War by Nikolai Bukharin, showed how the major powers divided the world between themselves, to advance the interests of the large capitalist firms within each state. It was an outgrowth of capitalist competition for control of markets and raw materials.

Imperialism is not simply a system where the largest states dominate weaker states, but one of competition between the major powers. This remains true today, with the US focused on maintaining its dominant position against China and Russia, as well as attempting to push allied powers in Europe and Asia to work alongside it.

Invading Iraq was meant to give it control of the country’s vast oil reserves. It was to be the first of a series of military adventures. In early 2002 George Bush listed an “axis of evil” in the US’s sights, including Iran and North Korea.

Almost immediately, there was armed resistance to the US occupation. The city of Fallujah was one of the first to rise up, after US troops shot 13 people at a protest in April 2003. The US laid siege to the city, sealing at least 30,000 civilians inside as they bombed medical clinics and unleashed illegal white phosphorus explosives.

The US regained control of the country only through encouraging vicious sectarian divisions between Sunnis, Shias and Kurds. Up to a million Iraqis died in the violence that resulted.

But it failed to secure the pliant puppet regime it wanted. The result strengthened Iran, a long-term US adversary, which gained significant influence over the new Iraqi government.

The sectarian system the US left led to the rise of Islamic State, which briefly overran large areas of the country.

US imperialism has been left far weaker. Its failures in Iraq and Afghanistan have exposed the limits of its military power. The wars cost it $6.4 trillion with little to show for it.

Meanwhile the Chinese economy continued to grow through the global economic crisis after 2008 while the US hit the skids. China has also handled the COVID crisis far better than the US, where 650,000 have died.

Yet a weakened US, increasingly desperate to maintain its position, is only more dangerous. Its military power still outpaces that of any other country.

US President Joe Biden has continued Donald Trump’s confrontational approach towards China, declaring, “We are in a competition to win the 21st century, and the starting gun has gone off.” He has moved to strengthen military alliances with its neighbours, including Japan, India and South Korea. Naval patrols around the disputed areas of the South China Sea are increasing.

The US military is repositioning its forces to face China. Biden explicitly defended the decision to quit Afghanistan as necessary “to focus on the challenges that are in front of us” with an “increasingly assertive China”.

As it did over the past 20 years, the Australian government is urging on the conflict, talking up the prospect of war and pursuing its own arms build-up. It wants an expanded alliance with the US to lock the superpower into aggressive military action in our region.

This is only increasing the prospect of a major conflict between two nuclear-armed states. Just as the left did over Afghanistan and Iraq, we need to oppose this new drive to war and the racism and xenophobia that comes with it.

Twenty years of Islamophobia and the “war on terror”

In the aftermath of 9/11, world leaders were quick to blame “Islamic terrorism”. Islam as a whole was depicted as a “backward” or “violent” religion and all Muslims treated as suspect.

This served to justify the wars in the Middle East. Instead of recognising terrorism as a result of US policies that had devastated the region, Western leaders claimed they were the result of an evil ideology opposed to “Western values”.

Then Prime Minister John Howard accused the Muslim community in Australia of failing to “integrate” and claimed that “extremism” among Muslims was “not a problem that we have ever faced with other immigrant communities”. The Liberals claimed refugees arriving by boat, mostly from the Middle East, could be terrorists, using this to justify racism and anti-refugee policies.

Howard admitted that most Muslims had nothing to do with terrorism. But he continued to tar them all by claiming terrorism was a product of Islam and demanding that Muslim leaders do more to prevent it.

In late 2005 this led to the shocking racist riot at Cronulla beach, where Lebanese Australians were physically attacked by a racist mob. John Howard’s responded by claiming there was no “underlying racism” in Australia.

The Islamophobia has never stopped. After the emergence of Islamic State in 2014, Tony Abbott launched another scare campaign about terrorism and youth “radicalisation”. Scott Morrison has done the same, declaring after a mentally ill man stabbed one person to death in 2018 that, “The greatest threat to our way of life is radical, violent, extremist Islam.” There have been continual anti-terror raids, sometimes involving hundreds of police.

All this has been accompanied by a tidal wave of media reporting designed to terrify people.

Individual racist attacks have become common. A study in 2004 showed two-thirds of Muslims had experienced abuse or violence on the street since 9/11. Surveys have consistently fond that around 40 per cent of people admit to negative feelings about Muslims.

Islamophobia will be a lasting legacy of our rulers’ response to 9/11. We need to keep fighting the racism and insist that working class people unite against the government and bosses who pose the real threat to our living standards and lives.