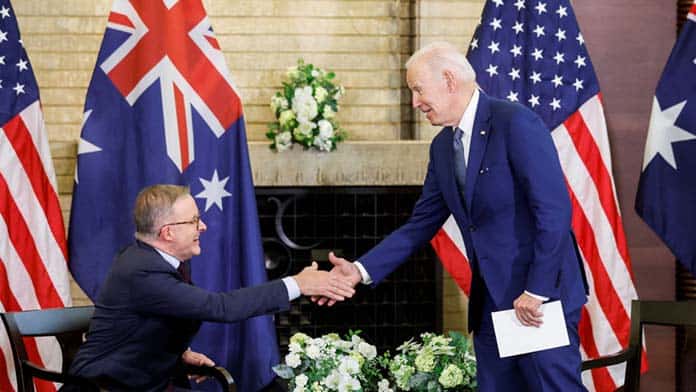 Clinton Fernandes’ new book explains how Australia works as a subimperial power alongside the US, but still argues for a nationalist policy, says Robert Stainsby

The new book by UNSW Professor of International and Political Studies Clinton Fernandes, Subimperial Power: Australia in the International Arena, is both exciting and frustrating. It challenges orthodox understandings of Australia’s position in the world, among both the foreign policy establishment and left-wing activists.

Yet Subimperial Power ultimately provides no real alternative to the push towards war and militarism championed by the US and Australian ruling classes.

Fernandes correctly says that the US “sits at the apex of a hierarchically structured imperial system”, projecting power across the globe, economically, technologically and culturally.

In particular: “It is the only country whose military is designed to leave its own hemisphere, cross vast oceans and airspace, and then conduct sustained, large-scale military operations in another hemisphere.”

With its partners like Australia, the US enforces the “rules-based international order”, which is notably not based on the UN, but on asserting “the rights of private investors over the sovereignty of most states”.

Courageously, Fernandes has put his weight behind the campaign against the AUKUS agreement to share cutting-edge military technology between the US, UK and Australia. Discussing the agreement, he observes: “Australia’s [planned] nuclear-powered submarines are focused not on defending Australia from hostile powers but on supporting the United States in its determination to project power globally.”

In particular, they would be critical for the US’s ability to conduct military and intelligence operations in other countries’ coastal waters. Fernandes points out that China is even more dependent than Australia on sea-borne imports, so US access to seas near China gives it major leverage over its rising imperial rival.

Taiwan is a flashpoint, not because the US has any special love for democracy, but for its position and the importance of its world-leading semiconductor industry. Taiwan aside, “China’s priority is not to invade or occupy areas of the Asia Pacific … but rather to raise the cost of hostile US action.”

Fernandes accurately describes AUKUS as “the military, intelligence and cyber equivalent” of Australia’s free trade agreements with the US and US: “The three agreements reflect Australia’s full-spectrum search for relevance to great power allies in the era of Cold War 2.0.”

First, the book makes clear that cooperation with a larger imperial power has always been a choice made by Australia’s rulers, not something they have been forced into.

For example, with regard to the perception that Australia is continually forced to fight “other people’s wars”, Fernandes quotes military historian Craig Stockings: “The reality is that ‘Australia’s wars have been Australia’s choices, or at least the consequence of the willing decisions of Australian politicians and policymakers in pursuit of the perceived national interest’.”

Second, the motivations for these decisions are rational in these decision-makers’ terms: “it is not easy to argue that the status quo generally harms Australians when balanced against the other benefits that flow from a liberal international trading order underpinned by US power. That order produces winners and losers; Australia is in the former group, and there is very little consideration of the interests of the latter.”

There is a fascinating account of how the British Empire worked to lay the foundations of Australia’s current prosperity. While the Empire poured wealth into public spending here, “Indian income collapsed by half and average life expectancy dropped by a fifth from 1870 to 1920.”

Third, while Australia willingly subordinates itself to the US, it bullies its own neighbours. Fernandes recounts how Australia took economic control of Fiji, Papua New Guinea, the Solomon Islands and Vanuatu around the turn of the 20th century, with forced indentured labour a key feature.

More recently it has undermined Timor-Leste’s control of that country’s oil and gas resources. Its “boomerang aid” to the Solomon Islands, which mostly ends up in Australian pockets, just makes China’s offers of aid more attractive.

Australia gives every indication it will go to war over a Chinese invasion of Taiwan yet stands firmly against self-determination for its own neighbour West Papua.

Fernandes singles out Israel as a country in a similar subimperial role to Australia, while noting that Australia’s region is not such a focus of global tensions.

Like many on the left, he recognises Israel as an apartheid state worthy of international condemnation. The fact that Australia plays such a similar role in world affairs should give leftists who sympathise with Australian nationalism pause.

Socialists can whole-heartedly endorse Fernandes’ description of Australia as a subimperial power. However, his definition of “imperialism”—“control of other countries’ sovereignty”—is not the one we use, and this difference is critically important.

Our critique comes from the Russian Bolsheviks Bukharin and Lenin, who saw imperialism as more than the age-old pattern of one country controlling another. It was a consequence of the development of capitalism to a point where capital became ever more entwined with states competing to retain and seize territory, and to control trade and markets.

In this understanding, military competition and the domination of a few powers is not a matter of mistaken government policy. Rather it is structured into the very nature of the global economic system.

Each major power is locked into a continual struggle to defend its influence and power across the world against its rivals. Inevitably this regularly breaks out into shooting wars, as we are seeing now in Ukraine based on the tensions between Russia and NATO.

Fernandes laments Australian elites’ choice to surrender elements of sovereignty to the USA. But a state’s possession of more complete sovereignty does not necessarily benefit the majority of its people. Workers in the more “sovereign” United States face worse living standards and levels of social services than those in Australia.

The limitations of Subimperial Power stem from a failure to interrogate the notion that there is an Australian “national interest”, shared by all its people, bosses and workers alike. Fernandes does identify some fault lines inside Australia, notably the division between the defence and foreign affairs establishment and the public, from whom it keeps secrets.

Sometimes he writes as though the establishment is simply carried away with a mistaken view of Australia’s true interests and the solution is to bring more of the population into the debate: “People can understand Australia’s role in the international arena if institutions do not work actively to exclude them. That calls for long-term collective efforts to reveal rather than mystify Australian foreign policy.”

At other times, he is more sombre and realistic about the possibility of Australia’s elites taking a different path, concluding “Australia is unlikely to make a serious commitment to neutrality, multipolarity or a democratic and equitable international order”.

The demand for an “independent Australia” is popular among peace campaigners. Yet Fernandes inadvertently exposes how it would mean anything but peace: “Such a policy would require a posture known as the ‘strategic defensive’: making Australian forces an aggressive, elusive military that avoids detection, seeks battle on very favourable terms, and compels a hostile adversary to abandon its goals.” An independent Australia would need its own fleet of deadly submarines, albeit not nuclear ones.

As David Brophy argues in his superior 2021 book China Panic, this is a vision of “an Australia further sacrificing the health and education of its people so as to ‘independently’ seek advantage in the regional rivalries it will remain embroiled in”.

Brophy continues: “If, like me, you look at this menu and think ‘none of the above’, we need to consider the third, all too neglected option: a conscious commitment to dismantling the drivers of competition between states.” And we need to understand those drivers lie in the global domination of capitalism—and, for Australia, in its place as a subimperial capitalist power far from the centres of empire.

Craig Stockings comments on the back cover that readers “might just have uncovered a new lens through which to see the world about you”. But the lens we really need is class, a dimension that’s sadly neglected in the book.

The Australian state does not serve the interests of the whole population, but belongs to the Australian capitalist class. This class and its state are no more interested in workers’ welfare than their international rivals.

They have calculated time and time again that it’s in their interests to align themselves with the USA and dominate our island neighbours. They are just as happy to risk workers dying in war as they are to trash our living standards and working conditions, and destroy the climate.

In clearly laying out that Australia has power and benefits from its place in the imperialist system, and that it has constantly chosen the subimperial role, Fernandes makes a valuable contribution to the peace movement’s understanding of the enemies we face. Yet he sows illusions in the scope for this subimperial settler state to operate differently.

Rather than bolster the sovereignty of the Australian state, the left should be concerned with strengthening movements of workers and Indigenous peoples oppressed by Australia, both here and across the region, to control the damage it does.

The final chapter of Subimperial Power is titled “Neither their war nor their peace”—an excellent slogan. Only we need to be clear that “they” are the international capitalist ruling class, which for us in Australia means Australian rulers first and foremost.

A peaceful world will come not from the UN, or a neutral capitalist Australia, but from workers’ united international action against all capitalist war machines.