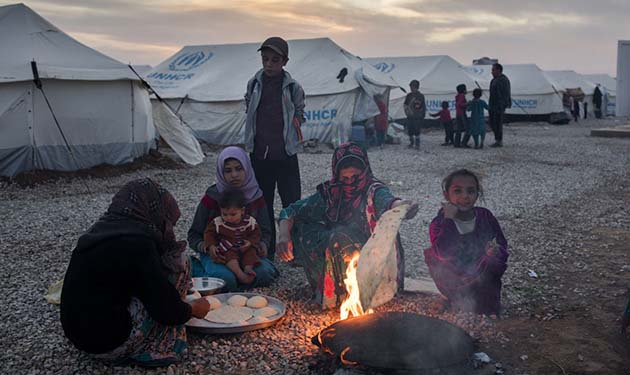 A US-led coalition is entering the eighth week of a major assault on the city of Mosul in northern Iraq, currently controlled by the Islamic State (IS).

Life under IS rule has been extremely brutal for the 1.5 million residents of Mosul. The current operation threatens to compound the horror with potentially the largest humanitarian disaster since the US invasion in 2003. Seventy thousand people have fled the city so far, while more than one million, half of them children, remain behind the IS lines.

Official estimates of civilian casualties since the start of the offensive exceed 500, including those killed by both Coalition bombing and IS attacks. Amnesty International reported in October that white phosphorus munitions had been used in a Coalition bombing raid. The main hospital in Erbil, the closest to Mosul, is completely overwhelmed, treating more than 150 casualties a day from the conflict.

UN aid agencies say they will be unable to cope if hundreds of thousands of Mosul residents flee the city as predicted. Already, an extraordinary 3.3 million Iraqis are classified as “internally displaced people”, most of them barely surviving in refugee camps. Australian Foreign Minister Julie Bishop has pledged a pitiful $10 million to the humanitarian effort, while her government spends many millions each day keeping Australian troops and planes on the battlefield.

The US, UK, France, Australia, Canada and other “allies” all have forces operating both on the ground and bombing from the sky. Investigative reporters from the Air Wars website estimate that Coalition bombing of Mosul has killed more than 500 civilians since IS took the city two years ago.

Similar operations to retake much smaller cities and towns from IS this year have caused incredible devastation. In Ramadi in March and Fallujah in June, up to 80 per cent of buildings were destroyed and virtually the entire population had to be evacuated. Many of the largely Sunni population are deeply aggrieved that the Shia dominated Iraqi government is still preventing them from returning to rebuild and has indiscriminately detained many residents on suspicion of sympathising with IS.

The bloody sectarian divisions that plague Iraq today are the product of the US occupation from 2003 to 2011. This situation gave birth to the Sunni-dominated IS. The US built a sectarian government to rule Iraq, moving in 2004 to allow the incorporation of Shia militia into the structures of the state, as a deliberate tactic to split a strong, united insurgency initially challenging the US occupation.

These Shia militia, known as “Popular Mobilisation Units” are trained and overseen by the Iranian military and have been accused of atrocities against Sunni civilians. They are playing a crucial role in the offensive on Mosul. Despite early assurances that the militia would not enter the city, on 27 November the Iraqi government voted to formalise their role in the operation, with more than 100 Sunni legislators boycotting the parliament session.

The destruction of Iraq by more than a decade of US bombing and occupation has created enormous political instability that has seen the surrounding regional powers move in and try to consolidate their influence.

Turkey has deployed 700 troops north of Mosul, capitalising on fear of the Shia militia by posturing as protectors of a “Sunni Mosul”. They are working with Sunni politicians in Baghdad to train and arm their own militia. One of these, businessman Khamis Khanjar, warned, “Everyone is looking for salvation from Daesh… but after Daesh is defeated a new dangerous phase will begin if the United States and the government do not address Sunni grievances. This could threaten the future of the Iraqi state”.

The regional power that has benefited the most from the chaos has been Iran, which now wields unprecedented influence within the Iraqi state.

In Syria, Iranian forces backed by Russian bombs support the dictatorial Assad regime. Some on the left argue that Russia and Iran should be considered “anti-imperialist” because they oppose the United States and see Assad himself as an anti-imperialist.

But socialists oppose both Russian and US imperialism in Syria and Iraq. The fallacy that Iran is anti-imperialist is graphically shown by its willingness to deploy the Shia Popular Mobilisations Units to work as part of the US-led assault on Mosul.

Ordinary people in both Iraq and Syria are victims of imperialism—a global system where major capitalist powers like the US and Russia and smaller regimes like Iran, Saudi Arabia and Turkey all compete to exert their control over territory and markets.

Mosul may be recaptured from IS, but there will be an enormous human cost, and the sectarian problems cannot be bombed away. Sectarian divisions, and bitter deprivation in Iraq, look set to deepen even further. In Australia we should demand our government stop bombing Iraq and Syria, withdraw military forces, open the border to refugees fleeing these conflicts and massively increase the aid budget to help rebuild Iraq.