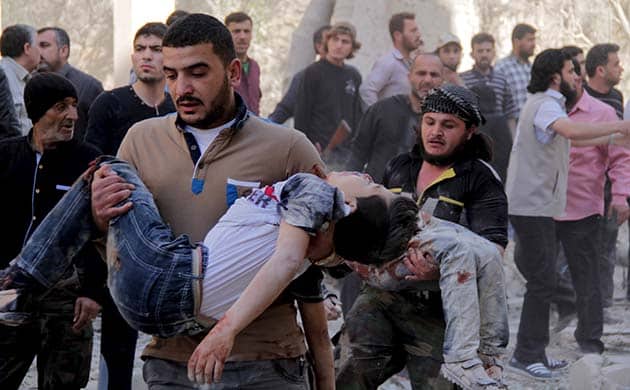 Russia’s intervention to shore up the Assad regime and begin bombing in Syria has decisively turned the tables on the US and its regional allies.

Russia has made clear that it will not allow the Assad regime to fall, and shown its willingness to bomb even US-backed rebels.

The US’s focus in Syria has been on bombing Islamic State, after it took over wide areas of Syria and Iraq last year. This puts it in effective alliance with Assad, who is also fighting IS.

The Australian government began bombing in support of the US in September.

The US, and other regional powers including Turkey, Saudi Arabia and Qatar, have also been arming groups among the opposition rebels, in the hope of installing a government in Syria more sympathetic to their interests.

But the US has had little success finding reliable allies, with US weapons turned over to Al Qaeda affiliates and just 100 fighters in the Pentagon’s year-old training program compared to hopes of 5000.

So a number of US allies are now moving to embrace Assad. Australian Foreign Minister Julie Bishop has gone as far as to say that, in any transition, “the only conceivable option would be a national unity government involving President Assad”.

The US’s public position is still that Assad should step down, but Obama now says he is willing to negotiate with Russia and Iran to end the conflict through a “managed transition”.

US Secretary of State John Kerry has refused to put a time limit on how long Assad should remain in place, simply saying he could stay for “a reasonable period of time”.

All of the outside powers in Syria have their own geopolitical and economic interests at heart.

We should oppose Russian, US and Australian bombing as well as all forms of foreign imperialist intervention.

Russia’s partnership with Syria is the last remnant of Russian influence in the Middle East, and it is determined to hold onto it. Assad has been a Russian ally since well before the civil war began. Syria hosts Russia’s only naval base in the Mediterranean, at Tartus, established in 1971. And Russia has remained Syria’s major arms supplier since the Cold War, continuing to sell the regime arms all through the civil war.

The conflict in Syria began in 2011 with a democratic uprising against Assad’s dictatorship. The government shot down protesters and tried to drown the revolution in blood, triggering an armed revolt.

Assad’s ruthlessness has allowed groups like Islamic State to grow and carve out their own areas of control. The scale of the regime’s atrocities and sectarian killings has helped drive recruitment to the most savage and sectarian of its opponents. Over time they have become a larger and larger force in opposition controlled areas.

In the first six months of this year the Assad regime was responsible for at least 75 per cent of the civilian deaths in Syria. It is the only group in Syria with an airforce, and has relentlessly bombed civilian areas, dropping 10,000 deadly barrel bombs this year alone.

Almost 13,000 Syrians have been tortured to death in the regime’s prisons since the start of the conflict. The regime has made use of sectarian militias from early on, massacring civilians in an effort to spread terror.

Syria’s war has devastated the country, with 200,000 dead and four million now driven out of the country as refugees.

Assad is no lesser evil to Islamic State and similar rebel groups like the Al Qaeda affiliate Jabhat al Nusra. Like IS, the Assad regime also ruthlessly represses any political dissent, has targeted ethnic minorities and is waging sectarian war.

The solution to the nightmare in Syria can only come through a revival of the democratic movement that erupted in 2011.

Despite the desperate situation, protests and popular organisation continues. In August and July there were demonstration in towns and rural areas around Aleppo, Damascus and elsewhere, against the authoritarianism of Jabhat al Nusra and the Army of Islam group. They included a march of thousands in rural Damascus, according to Syrian revolutionary Joseph Daher.

As we are seeing in the new round of protests in Iraq and Lebanon, popular movements that unite working class people across ethnic and sectarian divides can point a way out of the horror.