Syria between both Assad’s and IS’s counter-revolution 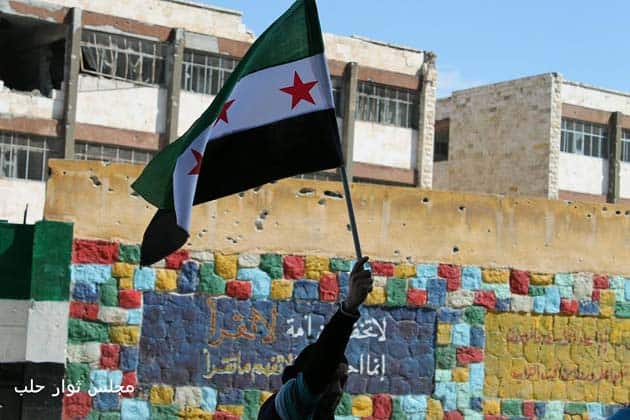 The conflict in Syria has left more than 220,000 dead and nine million people displaced, including three million refugees.

What began in March 2011 as peaceful pro-democracy protests inspired by the Arab Spring’s demands for democracy and social justice, has become a nightmarish military quagmire. Regional powers Iran and Saudi Arabia are backing opposing sides to boost their own influence.

The regime of Bashar al-Assad has sought to convince the world of two things: that it is winning; and that supporting the Syrian army is necessary to oppose Islamic State and Jabhat Al Nusra (the local Al Qaeda affiliate).

But recently there have been renewed victories for the insurgency.

In the north, they took control of Idlib’s provincial capital in March, and one month later took the strategically important city of Jisr a-Shugour. Meanwhile, the Southern Front (a coalition of 58 rebel factions affiliated with the Free Syrian Army) has gained ground in Daraa province.

Despite efforts at conscription, Assad is running out of soldiers. For example, Afghan Hazaras are being used by Iran to fight and die as cannon fodder.

There are divisions within Assad’s inner-circle, with some publicly expressing anger that Iranian officials enjoy more power than they do. Ali Mamlouk, the head of Syria’s National Security Bureau was recently placed under house arrest for plotting a coup. In late April, chief of political security Rustom Ghazaleh was beaten and killed.

Assad retains the backing of Hezbollah and Iran. And he still holds his core areas between the capital Damascus and the Mediterranean coast, including Homs and Lakatia.

Moreover, Assad forces continue to enjoy aerial superiority. The Syrian Observatory for Human Rights has documented over 12,500 regime air raids for 2015 so far, (including 6686 barrel bombs dropped from helicopters). As a result, 1820 civilians had been killed and a further 15,000 wounded.

This has led to calls from within the opposition for a No Fly Zone over Syria, backed recently by online campaigners Avaaz. But such calls are misguided. A No Fly Zone would not demilitarise the conflict as it would require the US to impose it, and would allow Assad to try to position himself as an anti-imperialist.

Another thing working in the regime’s favour is the rise of Islamic State (IS), which has led some on the left to support Assad as the lesser evil.

Yet despite IS’s highly publicised atrocities, including beheadings, the regime has been responsible for the vast majority of civilian deaths.

It is wrong to see any qualitative difference between Assad and IS—both want to impose vicious dictatorial regimes that allow no space for democratic rights or working class organisation.

They are both forms of counter-revolution that want to crush the initial popular democratic movements inspired by the Arab Spring.

There is evidence that the rise of IS fitted in with the strategy of Assad. While Assad was busy crushing democratic, secular activists, three months after the uprising started, he liberated many Salafist and reactionary groups from prisons like Seidnaya near Damascus.

Joseph Daher, who runs the Syria Freedom Forever blog wrote: “The Assad regime has concluded various oil deals, first with Jabhat al-Nusra and then IS since 2013.”

Until ISIS took the regime’s military base in Raqqa late last year, ISIS and Assad forces rarely fought each other directly. ISIS instead focused its energies on attacking other opposition commanders, and seizing already liberated areas such as Al Raqqa. All of this suited the interests of Assad. In the north, the Free Syrian Army and Kurdish brigades are finding common cause due to ISIS’s assaults on them.

Western governments including the US are moving towards an accommodation with Assad. In 2013, the US threatened airstrikes against his regime. Just one year later, Obama started bombing IS, with the tacit support of Assad. When a US airstrike on 1 May killed 52 civilians in the village of Birmahle in eastern Aleppo province there was no condemnation from the regime.

In the past the US favoured ousting Assad. Now Secretary of State John Kerry says “we need to negotiate in the end” with him.

Despite the political impasse, most of the Syrian people want neither Assad nor ISIS. In the lead up to the fourth anniversary of the uprising in March, there were protests in cities including Aleppo, Douma, and Saqba against abuses committed by both the regime and reactionary jihadist groups. In some towns, such as Kafranbel in Idlib, weekly protests still occur supporting the aims of the revolution.

Organising such actions has become difficult, but there are still democratic forces within Syria who are trying to keep the original ideals of the revolution alive.