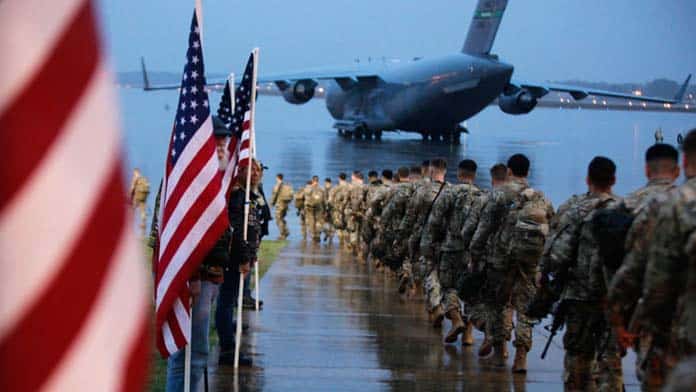 Adam Adelpour continues our series on Marxist classics, looking at how Imperialism and World Economy explains a system of global rivalry and war

Imperialism and World Economy by Russian Bolshevik revolutionary Nikolai Bukharin was published in 1917. It is one of the best products of a period where Marxist mass movements fused theory and practice to combat capitalism and war.

The book couldn’t be more relevant today. The world lives under the shadow of a potential conflict between nuclear powers, the US and China. The danger is of a magnitude unseen since the Cold War.

Australia is a belligerent player in the escalating tensions. Scott Morrison used the G7 summit in June to ratchet up calls for anti-China measures by powerful, US-allied states. On the 70-year anniversary of the ANZUS treaty which formalised the Australia-US alliance Morrison warned: “Australia is confronting the most challenging strategic environment in decades.” The “challenge” he was talking about was China.

We face a more and more militarised Asia-Pacific, increasing US troop rotations in Australia and a Liberal government that announced $270 billion in military spending in 2020. Revisiting Bukharin’s Imperialism and World Economy is invaluable for those who want to explain, prevent and end war today.

The war to end all wars

The history of capitalism is a history of wars and industrial-scale death. But in the lull between each new bloodbath there are theorists who announce that capitalism has finally brought an end to war once and for all. Their message is always that we don’t need to change the system; that attempts at radical change would only jeopardise “peaceful” capitalism.

Imperialism and the World Economy was written and published amid the destruction and carnage of the First World War, dubbed the “war to end all wars”.

For socialists across Europe and the world, the war offered a stark choice: either line up with your own ruling class and support the bloodshed or fight against the war for internationalist principles and socialism.

Socialists were divided across Europe. Many of those who marched under Marx’s banner and chanted “workers of the world, unite” every May Day turned their backs on internationalism and supported the slaughter.

When the war broke out in 1914 only a very small number of socialists denounced the war as imperialist and refused to support their own governments.

The strongest anti-war voice was the Russian Bolsheviks, of which Bukharin was a member. The Second International—an association of the world’s leading socialist parties—disintegrated as its most powerful parties abandoned their principles and supported the war.

A fierce debate over the nature of imperialism erupted among Marxists in response to the war. Some sought to disguise their betrayal of internationalism in the revolutionary language of Marxism. Others sought to use Marxist theory to explain the war and how to end it.

Imperialism and World Economy was Bukharin’s contribution to this battle of ideas. His main theoretical opponent was Karl Kautsky, the so-called “Pope of Marxism” and leading light of the German Social Democratic Party (SPD).

The SPD voted to support war credits in the German parliament when the war broke out. Russian Bolshevik leader Vladimir Lenin was so shocked that he initially thought the edition of the SPD newspaper that carried the news was a forgery cooked up by the German government.

The theoretical basis of Kautsky’s argument was sophisticated. He argued: “The frantic competition among the huge firms, giant banks and multimillionaires compelled the great financial groups, who were absorbing the small ones, to devise the cartel. Similarly, the world war between the great imperialist powers may result in a federation of the strongest who renounce their arms race.”

His claim was that the competitive drive at the heart of capitalism led to monopolies in the national economy, and the same tendency would ultimately lead to international co-operation among capitalists for their common good. He called this mutually profitable truce between capitalist states “ultra-imperialism”.

This theory lives on today among some on the left, such as the authors of Empire, Michael Hardt and Antonio Negri, who argue that the role of the state has been diminished by globalisation and that state rivalries are therefore in the past. It’s also reflected among those who say that Australia’s trade with China means war is impossible.

Kautsky’s theory gave cover to those who refused to meaningfully oppose the war and opened the door to pro-war arguments. Assuming that imperialist war is simply a matter of bad policy allowed the German ruling class to blame war on the aggressive policy of Russia or France and vice versa. On the basis of this argument, workers could easily be corralled behind their rulers to “defend” their homeland.

On the eve of the war Kautsky wrote that, “war had become irrational precisely because the world economy was becoming integrated on an international level”.

The political conclusion of Kautsky’s argument was that imperialist war was a mistake and not a product of capitalism. Therefore it could be stopped short of revolution by pacifist “pressure from below”. He even issued a call for “capitalists of all countries to unite”.

The origins of imperialism

Bukharin sought to systematically explain the underlying dynamics of imperialism and war, as did Lenin—although Bukharin’s analysis was more sophisticated. By outlining two conflicting tendencies of the system, he showed that, rather than resulting in global peace as Kautsky argued, the globalisation of capitalism results in global war.

The first tendency is outlined in chapter 10, that capitalist competition drives the “concentration and centralisation” of capital into larger and larger companies and groups of companies, increasingly fused with the largest banks and the national state.

The second tendency is outlined in chapter 11: the internationalisation of production, trade and investment as huge companies increasingly rely on international markets, foreign sources of raw materials and international trade routes.

As a result of these two tendencies the world becomes a battleground where major powers whose giant companies have outgrown national borders fight for control.

As Bukharin put it: “The struggle between state capitalist trusts is decided in the first place by the relation between their military forces, for the military power of the country is the last resort of the struggling ‘national’ groups of capitalists.”

In chapter 13 Bukharin makes it clear that this inevitably results in large-scale military conflict: “Under such conditions there inevitably arises a conflict, which, given the existence of capitalism, is settled through extending the state frontiers in bloody struggles, a settlement which holds the prospect of new and more grandiose conflicts.”

The final sections of the book deal with Kautsky’s theory of “ultra imperialism”, calling it a “deeply harmful Utopian fantasy”.

Bukharin argued that a peaceful international order would be conditional upon the “comparative equality” of economic development among major powers. He wrote: “Where there is no such equality, the group occupying a more favourable position in the world market has no reason for joining a compact: on the contrary, it sees an advantage in continuing the struggle.”

The uneven global development of capitalism itself guarantees certain powers rise and fall economically, with the shifting balance creating opportunities for rivals to assert themselves militarily on the world stage. We are seeing this today, with the rise of the Chinese economy underpinning Beijing’s military expansion and more intense rivalry with the US and its allies, including Australia.

Despite the powerful analysis of imperialism at its core, Imperialism and World Economy suffers from some significant weaknesses.

It overstates the extent to which the state is a mere puppet of capital and underplays the continuing potential for serious economic crises in major imperialist states. Unmodified, Bukharin’s theory would be unable to anticipate or explain the Great Depression and the emergence of fascism in Germany, for example.

The core of Bukharin’s theory explains the actual events of the First World War and the tendency towards war that defined capitalism in the 20th century and now the 21st.

While Kautsky’s theory at best led to a reformist strategy of accommodating to the existing system and pressuring for a more “peaceful” capitalist policy, Bukharin and the Bolsheviks recognised you could have peace or capitalism—not both.

In October 1917 the Bolsheviks led the overthrow of the pro-capitalist government in Russia, established democratic workers’ power and withdrew from the war. This helped bring about a crisis in Germany and a revolution led by workers that brought an end to the carnage.

These theoretical insights are crucial today. The idea that the economic ties between the US and China, or China and Australia, are a bulwark against military conflict is a dangerous illusion.

In fact, the economic links between these competing capitalist states have served only to exacerbate military tensions. Trade disputes and tariffs form the backdrop to a regional arms race. This is not simply the product of rotten policy by individual governments, it is the product of a rotten system.

Writing on the eve of revolution in Russia, Bukharin made the revolutionary conclusions of his theory abundantly clear: “Capitalism has increased the power of militarism enormously. It has brought to the historic arena millions of armed men. The arms, however, begin to turn against capitalism itself.”

On the anniversary of the ANZUS treaty Scott Morrison said the goal of Australia’s alignment with US military might was to “build the economic strength for the peace and prosperity of all”. Bukharin’s Imperialism and World Economy helps us see this kind of lie for what it is. Capitalists start wars and workers die in them. The only path to peace is through workers’ resistance and revolution.