75 years since Pearl Harbour: How the US pushed Japan towards war 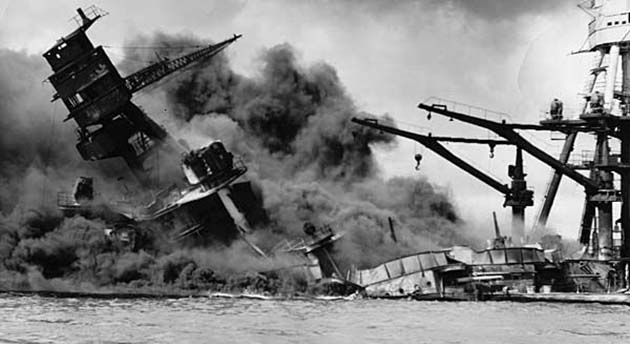 The war in the Pacific began 75 years ago with the Japanese attack on Pearl Harbour. But it was fundamentally a war between two powers for dominance of Asia, writes Tom Orsag

The 75th anniversary of Japan’s attack on Pearl Harbour will see the recycling of myths about the “infamy” of this supposedly sudden and unexpected attack. But any close examination of the attack on 7 December, 1941, shows that US manoeuvred Japan into “firing the first shot” and going to war.

The US administration had decided on war and aimed to force Japan, via crippling economic sanctions, into making that fateful decision.

Henry L. Stimson, Secretary of War, wrote in his diary on 25 November 1941, “The question is how we should manoeuvre them into the position of firing the first shot without allowing too much danger to ourselves.”

The reason President Franklin Roosevelt chose this path was that the American population was hostile to US involvement in the European war against Nazi Germany. This mood was described as “isolationism”.

To secure his re-election in November 1940, Roosevelt had to pledge himself to stay out of any foreign war.

Again Stimson was quite candid, in 1946, at a Congressional Committee investigating how the Japanese “caught the US unaware” at Pearl Harbour. He said, “In spite of the risk involved, however, in letting the Japanese fire the first shot, we realised that in order to have the full support of the American people it was desirable to make sure that the Japanese be the ones to do this.”

The US government minimised the risk by moving part of its Pacific Fleet in Hawaii to the Atlantic in May 1941. US aircraft carriers were also away on active service when Pearl Harbour was attacked.

The US may not have known exactly where the Japanese attack would take place. But it knew, at least, that some form of attack was likely.

The US was going to use the war in the Pacific as a means of involving itself in the European world war and the subsequent carve up of the world after Germany and Japan were defeated.

As a junior partner to British imperialism with its own interests in the South Pacific, Australia was also drawn into the conflict with Japan.

By the early 20th century the European powers had divided the world into rival colonial empires. This led to the horror of the First World War as the great powers fought over the re-division of the world.

At the end of the war Britain and France emerged with their empires intact, enlarging them through devouring the Ottoman Empire in the Middle East. The US had a place at the table carving out oil interests in the region.

Japan had been Britain’s ally against Germany in that war, much to the consternation of anti-Japanese racists inside the Australian ruling class and the Labor Party.

Japan began industrialising rapidly in the late 1800s. Its lack of oil, coal and sufficient mineral resources of its own meant it was dependent on foreign imports.

But the rest of Asia was already under the control of the older imperial powers, denying Japan access to the resources its economy needed.

The Russian Marxists Lenin and Bukharin argued in their theory of imperialism that the great powers would be forced towards the constant division and re-division of the world as the balance of power between them changed. This was tragically confirmed in outbreak of the First and Second World Wars.

By the late 1930s, American and Japanese imperialism finally collided over control of the Asia-Pacific.

What elevated their rivalry into war was the Great Depression. Economic collapse led individual nation states to attempt to cut themselves off from the world economy, trying to bolster their domestic industries through protectionism.

This meant Japan was shut out from export markets and raw materials. Trade restrictions by Britain, France and even China hit Japan hard economically.

Japan’s solution was to acquire its own colonies—first Manchuria in 1931 and then in China in 1937. It had already ruled Korea since 1910. British and American interests in China led to collision with those two powers. As Paul A. Schroeder put it, “There is no longer any real doubt that the [Pacific] war came about over China.”

The war in Europe that began in 1939 gave Japan the opportunity to seize more territory in Asia. French defeat and British exhaustion gave it the chance to gain control of rubber from French Indo-China (modern Vietnam) and British Malaya (modern Malaysia) and oil from the Dutch East Indies (modern Indonesia).

Japan’s rulers knew the US would be keen to fill the vacuum left by the old powers, so they studiously avoided war until it was pressed upon them.

Roosevelt refused to renew the US commercial treaty with Japan in July 1939. In July 1940, the US introduced licences for exports of oil and scrap-iron, then an embargo on all scrap in September. That month the US passed the Two-Ocean Naval Expansion Act, signalling to Japan its intention in the Pacific. In October, the US conducted its first ever peacetime military draft lottery.

Roosevelt sought to mask the slow strangulation of Japan’s economy by making it harder for Japan to even obtain the oil it held valid contracts for. Oil tankers began to be “regrettably unavailable” to carry supplies to Japan.

After Roosevelt’s re-election in November 1940, on a supposed policy of avoiding war, he extended the embargo to include iron and steel.

In response to Japan’s occupation of southern Indo-China in July 1941, the US froze all Japanese assets in the US, bringing trade almost to a standstill. Britain and the Netherlands joined the US embargo.

On 26 November Secretary of State Hull handed the Japanese an ultimatum, which insisted, “The Government of Japan will withdraw all military, naval, air and police forces from China and from Indo-China…[and support no] government or regime in China other than the National Government [of Chiang Kai-Shek].”

The Japanese government felt that it had been only left two options: retreat and subordinate Japan to America or take the risk that war involved.

When Stimson asked Hull ten days before Pearl Harbour about negotiations with Japan, his response was, “I have washed my hands of it and it is now in the hands of you and Knox [Secretary of the Navy]—the Army and Navy.” War was imminent.

The 12 December weekly intelligence of the British Admiralty wrote, “Had she not gone to war now, Japan would have seen such a deterioration of her economic situation as to render her ultimately unable to wage war, and to reduce her to the status of a second-rate power.”

Being a far weaker power than the US, Japan chose to strike first in the hope that throwing the US off balance might see it lose enthusiasm for war.

Joseph Rochefort, Naval Commander of Station HYPO (combat intelligence centre for the Pacific Fleet), was blunt, “We cut off their money, fuel and trade. We were just tightening the screws on the Japanese. They could see no way of getting out except going to war.”

The US justified its actions in terms of its opposition to Japanese colonial control of other countries. But the US had exactly the same desire for control of the region.

Its imperial conquest and subjugation of the Philippines is a clear example. Together with Hawaii, which the US had seized in 1898, the Philippines became the stepping-stone for US power projection in the Pacific.

The US took control of the Philippines following its war with Spain in 1898. It then had to put down an uprising when locals demanded independence.

US President McKinley said the Philippines, were “unfit for self-government,” and “there was nothing left for us to do but take them all, and to educate the Filipinos, and uplift and Christianise them.” General William Shafter made clear the same year just what “uplifting” Filipinos would mean, “It may be necessary to kill half of the Filipinos in order that the remaining half of the population may be advanced to a higher plane of life than their present semi-barbarous state affords.”

In their three-year war to destroy the independence movement, US forces conducted a scorched-earth policy that devastated the country and its people, the majority of whom supported the independence fighters.

The populations of entire islands were herded into concentration camps, and hundreds of thousands were killed. One general reported that as many as 600,000 people were killed or died of disease on the island of Luzon alone—and an estimated one million Filipinos were killed, according to one historian.

The end of the war

The US was also prepared to use the barbarism of nuclear weapons to cement its claims. Its dropping of two atomic bombs on Japan in August 1945 was about demonstrating to US allies and rivals, in particular Russia, the US’s claim as the pre-eminent power in the post-war world.

With the atomic bomb, the US no longer needed Russia’s assistance to defeat Japan. In one stroke, the US was able to keep Russia out of that region and demonstrate to the world the power of a weapon only it possessed.

In mid-May 1945, Stimson had a long conversation with Assistant Secretary of War John McCloy about how to “deal with Russia.”

Stimson said it was a time to, “Let our actions speak for words. The Russians will understand them better than anything else. It is a case where we have got to regain the lead and perhaps do it in a pretty rough and realistic way… They can’t get along without our help and industries and we have coming into action a weapon which will be unique”.

Historian Herbert Feis concluded, “It is quite possible that it was thought the proof of the power of the weapon, as demonstrated in actual warfare, might be an effective source of added authority to the American Government in the settlement of matters at issue with the Soviet Union.”

The innocent civilians of Hiroshima and Nagasaki paid with their lives in their tens of thousands to demonstrate US power.