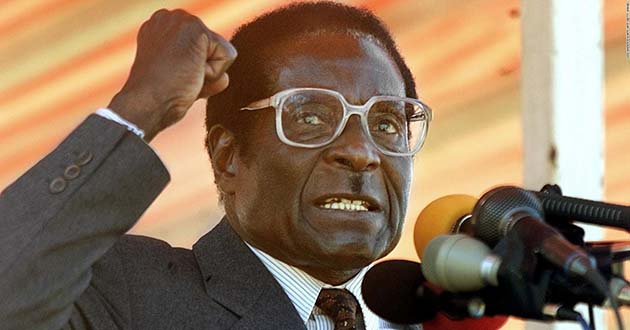 Robert Mugabe resigned on 21 November after being president and then prime minister of Zimbabwe in southern Africa since 1980.

He was a hero of the struggle against colonialism and first leader of independent Zimbabwe. He then became a compromiser with imperialism—and finally a dictator.

He went from being venerated by most of the country’s black workers and poor people to being hated by many who saw him as their tyrannical oppressor.

It is essential to understand both elements of his life.

Mugabe was born in 1924 in what was then the British colony of Southern Rhodesia. He escaped from extreme poverty through luck and his determination, drive and education, eventually reaching the South African University of Fort Hare.

Nelson Mandela said that, “For young black South Africans like myself, Fort Hare was Oxford and Cambridge, Harvard and Yale, all rolled into one” and Mugabe’s contemporaries included several figures who would become prominent in Africa after the colonialists had been removed.

He returned to Southern Rhodesia in the early 1960s and became involved in resistance movements against white rule. At the time about 225,000 whites had all the political power and virtually all economic power. Five million black people had none.

The colony, named after arch-plunderer Cecil Rhodes, had a complex voting system which ensured whites would always have the great majority of MPs. Land, seized by colonisers from the black inhabitants, was overwhelmingly in white hands. As late as 1979, whites who made up only 5 per cent of the population owned 70 per cent of the most fertile land.

Black opposition groups were repressed and banned. Many activists, including Mugabe, believed armed struggle would be needed to shake off white rule. Mugabe helped to form the Zimbabwe African National Union (ZANU) in 1963. Almost immediately he was arrested, jailed indefinitely, and was to spend a decade in prisons and punishment camps.

There he adopted a Maoist version of Marxism, particularly centred on the potential for peasant resistance and guerrilla war.

When his three-year-old son Nhamodzenyika died in 1966, Mugabe petitioned the prison governor for leave to attend the funeral. The racist white Prime Minister Ian Smith intervened personally to prevent this.

But repression could not stop the resistance. By 1978 the regime was in crisis, fighting a guerrilla war on six fronts, reduced to calling up all men under 60 for active military service and scouring the world for mercenaries. The ruling elite searched for a deal.

Elected leader of ZANU while in prison, Mugabe was released in 1974. While some other black stooge leaders were prepared to accept a power-sharing agreement with the regime, Mugabe held out for fuller democratic rights.

Talks at Lancaster House in London cleared the way for one person, one vote elections—a real achievement. But Mugabe also made two key concessions. Whites would be guaranteed 20 of the 100 seats in parliament. And, although Mugabe had promised, “none of the white exploiters will be allowed to keep an acre of their land”, he now agreed there would be no land reform for ten years, and no constitutional amendments for a similar period.

Despite this Mugabe retained a much more militant aura than other candidates, speaking of revolutionary transformation and justice. ZANU’s slogans for the election were “Confrontation not circumvention” and “We are our own liberators”.

Under the headline “Mugabe returns” Socialist Worker UK reported in February 1980, “For years the press branded him as a terrorist. But on Sunday 200,000 blacks turned out to give Robert Mugabe a wildly enthusiastic welcome to Zimbabwe. Even the press had to concede it was the biggest rally in Zimbabwe’s history.

“Mugabe is now talking very soft—a place for the whites, peaceful co-existence with South Africa. But his followers still respond enthusiastically to cries of ‘Pamberinahondo’—‘Forward with the war’. That’s why the British are pulling every dirty trick to stop him winning the election. Sunday’s rally shows they may not find it so easy.”

Much to the horror of the elites who had agreed the Lancaster House deal, the elections saw overwhelming support for the “communist terrorists” of ZANU which won 57 of the 100 seats and Mugabe became prime minister.

His government inherited an economy which had been deliberately wrecked by the departing white regime.

The first effect of black rule was a big improvement in ordinary people’s lives. Between 1980 and 1985 infant and child deaths fell by about half. Spending on education per head more than doubled. Grain supply trebled between 1980 and 1985.

Even Tory Prime Minister Margaret Thatcher said of Mugabe, “He is a man who can be relied upon to provide stability and economic growth.”

The West said virtually nothing as Mugabe’s forces killed 20,000 people in Matabeleland. Documents released in 2015 indicate the massacres were part of a drive to eliminate opposition. Zapu, the major opposition group, had strong support among the Ndebele and therefore the people of Matabeleland needed to be “re-educated”.

Throughout this period Mugabe treated the white farmers with great leniency. None of them were called to account for their crimes under the racist regime, none of them lost land, and none of them were forced to pay compensation for what they had stolen.

They responded by blocking initiatives to settle black people on unused white land, and by continuing to back Smith’s Rhodesian Front party.

From the mid-1980s, as crisis hit the world economy, the international bankers and capitalists stepped up the pressure on Mugabe. They wanted to see a sharp shift to market reforms and an end to all talk of socialism.

The crunch came in 1991. Unemployment soared and the price of Zimbabwe’s exports collapsed.

But Mugabe’s government insisted on repaying debt as part of the strategy of compromise with international financiers. The inevitable consequence was a war on Zimbabwe’s poor, spearheaded by the IMF and the World Bank.

ESAP, the Economic Structural Adjustment Programme, was born. For many Zimbabweans ESAP was soon renamed Eternal Suffering for African People. Mugabe’s government agreed to big cuts in social spending, privatisation of many state firms, an end to food subsidies, a removal of any barriers to multinationals entering the country, and “market determination” of prices and wages.

All the gains of the early years of independence were wiped out by a few years of ESAP. As early as 1992 massive student protests broke out against a huge rise in tuition fees.

The trade union movement, which had been tied to the ruling party, began to break away under pressure from below.

In December 1997 and January 1998 around one million workers joined “stayaways” against tax increases. Health workers, civil servants, transport workers and many others held successful strikes in their own industries. At the same time many townships exploded in urban uprisings.

The Movement for Democratic Change (MDC), centred on the trade unions, was formed to oppose Mugabe and rule by the elite.

Seeking scapegoats, Mugabe declared in 1995 that gay people were “worse than dogs and pigs”. He was to continue such attacks through the rest of his rule.

Early in 2000 Mugabe held a referendum on a new constitution that would have given him virtually unlimited powers. Almost unthinkably, he lost the vote.

Mugabe, a clever politician, realised he would have to make a sharp shift or be driven out. He tried to rebuild support by denouncing the white landowners and encouraging occupations of white-owned farms.

This successfully bound sections of the rural population to the government, and caused problems for the MDC which had absorbed a section of rich whites who hated Mugabe for all the wrong reasons.

But in 2008 even the vast machine of threats, killings and rigging could not hide the fact that Mugabe lost. He considered stepping down, and then unleashed the fury of the state machine against the opposition.

Shattered by the scale of the deaths, the MDC withdrew from the run-off vote, allowing Mugabe to claim an easy win. Then Mugabe lured Tsvangirai into a power-sharing government, before breaking all the promises he had made.

The MDC’s collapse into Mugabe’s claws enabled him to redouble his attacks, including against Solidarity’s sister organisation the International Socialist Organisation.

Zimbabwean capitalism is now in renewed crisis, with food shortages and fears that a return to hyper-inflation is on the way. New President Emmerson Mnangagwa wants full-blooded market reforms, which will make life even harder for workers and the poor. Zimbabwean socialist Munya explained, “The Mnangagwa faction includes the former finance minister who worked closely with the International Monetary Fund.”

Many political obituaries of Mugabe will denounce him for his attacks on white farmers. That was never his crime.

The problem was his politics of change from above without a focus on workers’ power.

Without a consistent focus on that force you are caught between imperialism and its coalitions of the killing, espousing liberal democratic values but policing an economic agenda producing widespread global impoverishment, and on the other hand an anti-working class authoritarian nationalism.