Socialism, Mao and the Chinese revolution 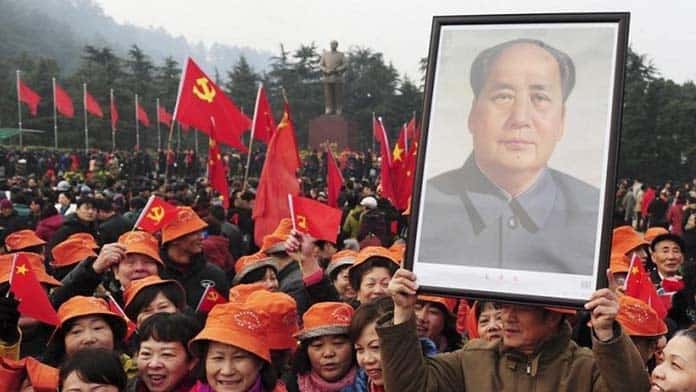 The Chinese Communist Party (CCP) was founded in 1921 amid a wave of workers’ and anti-imperialist struggles. Mao Zedong’s victory in 1949 came at the end of a 22 year long civil war between the CCP and the nationalist Kuomintang (KMT).

The CCP remains in power today—and yet there is little fundamental difference between modern “communist” China and the capitalist west.

The “communism” of the CCP has, but for a brief moment at its inception, never had much to do with genuine revolutionary Marxism. The regime that came to power in 1949 was not the result of a working class revolution. On the contrary—Mao’s vision for China was straight out of the state capitalist textbook written by Joseph Stalin in the Soviet Union.

The CCP was born from the excitement generated by the 1917 Russian Revolution. The victory of the revolution provided a boost to the left of the Chinese nationalist movement, which formed the CCP.

Unfortunately, this revolutionary moment did not last. Joseph Stalin and the counter-revolution were victorious in the Soviet Union. Stalin maintained that his state capitalist regime was continuing in the Marxist tradition—where it was the state, not private capitalists, who accumulated wealth and competed with other imperial powers like the US.

There was a certain truth to Stalin’s claims that the Soviet Union was different. The economy was planned, in a way, and business and property was nationalised. But the fact that it was the state, not individuals, responsible for exploitation, did not change the fundamental class relations in the Soviet Union.

Under Stalin’s rule, the drive for the Soviet Union to accumulate profits and better its global position relied on the brutal exploitation of workers, who had no say over how their workplace or their society was run. There was widespread famine and dislocation across Russia—not to mention the internment camps for Stalin’s political opponents, including the revolutionaries from the October Revolution.

Stalin rewrote the fundamentals of Marxism, declaring that “socialism in one country” was not only a possibility, but also something to aim for.

Imitation of the Stalinist model of rapid industrialisation through state control of the economy was fundamental to Mao’s programme in China, even after he declared his “independence” from the Soviet Union.

The corrupting influence of Stalinist politics combined with the peculiar circumstances of China in the 1920s and 1930s. Mao decided that he was going to come to power by building military muscle. Mao was not a Marxist who understood the importance of the “self-emancipation of the working class”—he was not even trying to build support amongst the peasantry.

Mao explained this approach in the late 1920s, “Only after wiping out comparatively large enemy units and occupying the cities can we arouse on a large-scale and build up a unified political power over a number of adjoining counties. Only thus can we arouse the attention of the people far and wide.”

In the late 1920s and early 1930s the CCP pursued a largely guerrilla strategy. The leaders of the CCP attempted to set up “soviets” in the mountains and villages, but they involved few more than party members.

Japan invaded China in 1931, and the KMT proved incapable of serious resistance. Mao demanded the KMT sign a pact with the CCP to fight the Japanese. In the course of the war Mao built the CCP into the pre-eminent nationalist force. His military units capable played a large role in the battle against Japanese invaders.

Contrary to many modern accounts, Mao’s base was not in the peasantry or in the working class—it was in these military units. Many of the soldiers were ex-peasants, but they were no longer living on the land or in the villages.

In an effort to draw together nationalist forces in opposition to the Japanese army, the CCP abandoned its programme for land redistribution. Mao said, “We are not confiscating the property and factories of the big and small merchants and capitalists. We protect their enterprises and help them to expand so that the material supply in the Soviet districts, so necessary for the anti-Japanese campaign, may be augmented.”

The combination of the KMT’s political (and military) weakness and the CCP’s military strength led the CCP to power. Despite all of its weaknesses, the Revolution represented a real blow to US imperialism, as the US had backed the KMT in its struggle against the CCP. The CCP also led a series of progressive struggles against all-powerful landlords and moneylenders.

Mao’s ascent to the top of both the CCP and then the government of the “People’s Republic of China” (PRC) was complete in 1949. Mao and the CCP spoke of the victory of the workers, but like Stalin and the Soviet Union before them, they had discarded Marxism long before 1949.

Between 1949 and 1952, Mao set about resurrecting an economy that had been all but destroyed as a result of decades of civil war. During these first three years, industrial output grew at a rate of 27 per cent a year.

This industrial revolution was driven by ruthless political control. The CCP rid the country of opposition—from right and left. There was also a slow, and small-scale, redistribution of land. This was designed to carefully balance the demands of large sections of the population with the needs of Mao’s growing economy.

The First Five-Year Plan continued this relentless drive for accumulation. Starting in 1952, the Plan promised to continue to increase state profits, which were averaging 30 per cent in the early 1950s.

Mao relied upon financing from the private sector to establish industrialisation out of the ruins of the pre-1949 economy. However by 1953 he was worried as private sector profits threatened to outstrip state profits.

Mao was even more concerned that workers were shifting from the government sector to the private sector because of better wages and conditions.

As a consequence, the fundamental aim of the Five-Year Plan was to absorb the private sector, leaving the state as the sole owner of enterprise. Mao ensured that private capitalists were handsomely compensated for their troubles.

This “nationalisation” was not the result of a buoyant labour movement or a bid to fundamentally alter the distribution of wealth or labour relations. Rather it was Mao’s solution to the need to standardise wages and conditions and keep commodities affordable for the government.

Despite his best efforts, Mao could not contain unemployment or even out growth across the economy. Mao lamented his problems, “China’s economy is backward and China is materially weak. This is why we have been unable to take much initiative; we are spiritually weak. We must make a spurt (forward in production).”

Mao’s Great Leap Forward (launched in 1958) was an exercise in excess. Faced with growing unemployment, Mao tried to expand industry again. It was not a break from the failed First Five-Year Plan; it was an expansion of it.

The Great Leap Forward established large-scale infrastructure projects (including irrigation and draining) and sought to increase the output of all industry.

The Great Leap Forward collapsed almost as quickly as it began. No matter how much the state tried to squeeze out of workers, it was never enough to meet Mao’s ever-growing targets. The country was wracked by famine and misery.

After the Great Leap Forward, Mao once again allowed the coexistence of private and state run capitalist enterprises. Mao proved himself adept at manipulating capitalist relations within China in order to meet the demands of accumulation and profit making.
The major programs of the first 20 years of the PRC were all geared towards what we see today in China—a massively growing economy, guided by a strong state that is able to manage, in many ways, the way in which profits are accumulated.

Under Mao’s successor Deng Xiaoping, much was made of China “renouncing Communism” and “embracing capitalism”. During the 1980s there were significant changes to the Chinese economy—including some further privatisation. But as we have already seen, there was a form of capitalism in China before Deng Xiaoping came to power—state capitalism. The fundamental transition in the 1980s was from state capitalism to market capitalism. This change did stimulate economic growth and bring people out of poverty—but it also culminated it a serious economic crisis at the end of the 1980s.

As we have seen in this brief history, Mao’s revolution had nothing to do with the fundamentals of Marxism—workers’ control and internationalism—and everything to do with creating a state capitalist society in the mould of the Soviet Union. The CCP has always had a flexible attitude to the existence of private capital in China, but one thing has been non-negotiable. The PRC was founded on the basis of the ruthless exploitation of workers—exploitation that continues today. But, despite all efforts, struggle against the regime has continued, and where there is struggle there is hope for a revival of the true Marxist tradition in China.