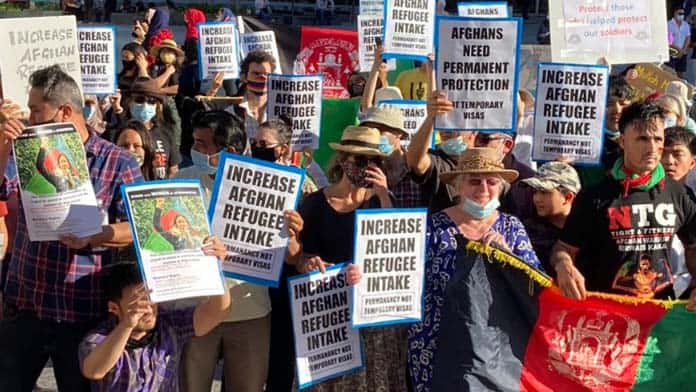 A month since the fall of Kabul, the Morrison government still shows no sign of responding to the demands to grant permanent visas to Afghan refugees already in Australia on temporary protection visas (TPV).

That change would also mean they could apply to bring their families who have been denied entry to Australia under the terms of TPVs.

More than 150,000 people have now signed a petition calling for permanent visas, and for a special category intake of at least 20,000 Afghan refugees separate from the Australia’s annual humanitarian quota.

Despite Morrison saying that the 3000 humanitarian visas set aside for Afghans was a “floor not a ceiling”, the government has done nothing to ensure that the thousands of people who need visas will get them.

The government evacuated 4100 people from Kabul, 800 of them at the request of other countries. Many others were those with Australian passports. The government has not said how many Afghan nationals were actually evacuated; those evacuated were limited to those designated as Locally Engaged Employees. Nonetheless, it is obvious that a majority of the 3000 ear-marked visas could have already been allocated. Yet the government says nothing about the thousands of Afghans who have been left behind, nor the thousands of Afghan refugees deprived of security in Australia.

Immigration Minister Alex Hawke says that his office has already received more than 10,000 humanitarian visa applications via Afghans in Australia. In normal circumstances, such applications can take years to process.

Meanwhile the 5100 Afghan refugees in Australia with TPVs are prevented from bringing their families. And, because they only have temporary visas, these refugees are forced to re-apply as they expire, usually after three years.

Some are still waiting for an answer two years after reapplying. In the name of deterring refugee boat arrivals, the government has deliberately created an underclass of refugees denied permanent residency.

Twenty years after Afghan refugees on the Tampa were denied entry to Australia, the government is again shutting out Afghan asylum seekers.

As people crowded around the gates of Kabul airport, almost the first thing Immigration minister Karen Andrews did as was to make a video warning that no one who arrived by boat would be settled in Australia. Meanwhile the only reassurance being given to temporary visa holders, Afghan students and others, is that, “No Afghan visa holder will be asked to return to Afghanistan at this stage [emphasis added].”

Former Human Rights Commissioner Chris Sidoti asked rhetorically, “how many human rights defenders? How many women’s and children’s rights activists? How many anti-corruption campaigners? How many democracy advocates did Australia evacuate from Afghanistan?” He reports that while the UK, Canada, Denmark, Belgium, Norway, France, Germany, the US and others have taken 43 of the 90 staff of the Afghanistan Independent Human Rights Commission and their families, Australia has taken none.

Even those who were known to Australian staff and had lodged Australia visa applications were left behind in Kabul unless the visa itself had been issued.

When pressed about why so few interpreters were evacuated from Afghanistan, Defence minister Peter Dutton resorted to similar baseless, fearmongering smears he has used against other asylum seekers, declaring that some of the former interpreters “had shifted their allegiance to the Taliban or Al Qaeda.”

The Morrison government is desperately trying to hold maintain its hardline border protection policies. But the pressure on the government will increase over the next weeks and months. Recent Afghan arrivals will be granted permanent visas while it is obvious that those on temporary visas (or who have been denied visas) cannot be sent back.

The demand on the government to lift its ban on accepting UNHCR refugees from Indonesia is also gaining momentum.

More protests are going to be needed to win permanent visas for Afghans and all those on temporary visas and to force Morrison to open the borders to all those who need protection.

Labor is committed to scrapping TPVs, but much more is needed. Offshore detention and boat turnbacks—every bit of Operation Sovereign Borders—must also be scrapped. The refugee movement can’t settle for anything less.