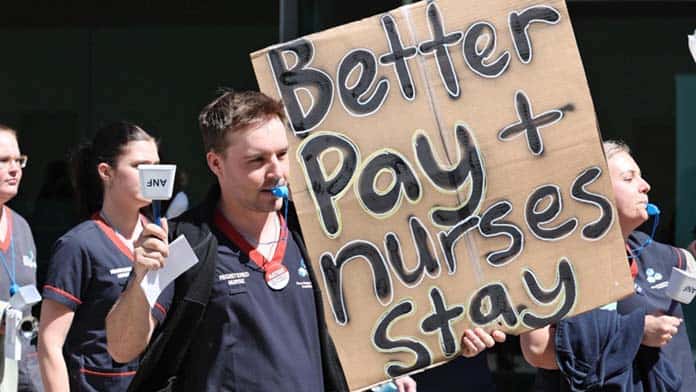 The cost of everything keeps going up—with no sign of stopping.

There was shock when Labor’s budget last month revealed that electricity bills will soar by 54 per cent over two years. But the government was not prepared to do anything about it, declaring that new spending would only push up inflation.

While we pay more, the gas and coal companies are making money hand over fist. Mining companies want us to pay the same obscene prices they can get overseas as a result of the war in Ukraine.

Treasurer Jim Chalmers has been ruling out any idea of a windfall tax on these obscene profits for months—but is now finally considering action on gas prices.

But Labor’s concern is more about business than workers’ cost of living. Chalmers said that gas prices were “so extraordinarily high that they risk strangling industries” with manufacturers that rely on gas going broke.

The Australian Industry Group has admitted that “Unless coal prices also fall, lower gas prices would provide only mild relief from the extreme wholesale electricity prices”.

It was still unclear what the government would do as we went to press. The most straightforward measure would be a price cap on what the gas companies can charge.

It should also seize the super-profits of the mining companies by forcing them to pay more tax. Better yet it could nationalise them, along with the power companies, in order to hold down prices. Queensland’s still publicly-owned power stations have been able to keep down price rises there.

Meanwhile wages will drop almost 4.5 per cent this year after inflation.

The new laws even create further legal hurdles before workers can use strike action—restricting the right to strike further.

Pathetically, the ACTU is celebrating the changes and putting its hopes in legal manoeuvres at the Fair Work Commission to deliver wage increases.

But it’s strike action that’s required to win gains on pay and conditions.

Workers at the Knauf plant in Melbourne won a 5 per cent pay rise, increases to penalty and overtime rates and other improvements after 40 days locked out following strikes.

Nurses and public sector workers in WA are fighting for better pay rises from the Labor state government. But in NSW public sector strikes are winding down, with union leaders focused simply on an electoral campaign to get Labor in at next year’s state election.

Anthony Albanese’s budget confirmed Labor’s timidity and refusal to offer serious change. It is sticking with the outrageous stage three tax cuts, which shovel tens of billions of dollars to the rich.

It is also pouring money into the military, with defence spending up 8 per cent this year to $48.7 billion, while it says there is no money to increase JobSeeker or fix hospitals and aged care. Albanese even told The Australian there was a blank cheque to spend “whatever was necessary” on weapons.

The government has also agreed to allow the US to base nuclear-capable B-52 bombers in the Northern Territory.

Labor has tried to use the COP27 summit in Egypt to spruik its credentials on climate change—despite Anthony Albanese’s own decision to skip the summit.

Yet barely a week before, it announced a new fossil fuel subsidy of $1.9 billion for the Middle Arm petrochemical plant in Darwin—designed to help open a whole new gas basin in the Beetaloo.

Labor is also backing the carbon bomb of the Scarborough gas project at the Burrup Hub in WA, Santos’ Pilliga gas project at Narrabri, new offshore oil exploration, and refused to put a stop to new coal and gas projects. There are over 100 new fossil fuel projects in the pipeline.

Over climate, the cost of living and public spending we need much bigger protests and opposition to force Labor to deliver change.

Refugees are showing the way—planning a second convergence on Canberra on 29 November after 1500 rallied there in September.

With six months gone since the election, Labor has refused to ever offer a timeline to honour its promise to grant permanent visas to refugees on Temporary Protection Visas and SHEVs—let alone offer anything to the 1300 refugees from Nauru and PNG in Australia or the 10,000 unfairly refused refugee status under the Liberals’ processing system.

We are going to need much more of this kind of action to win serious change.