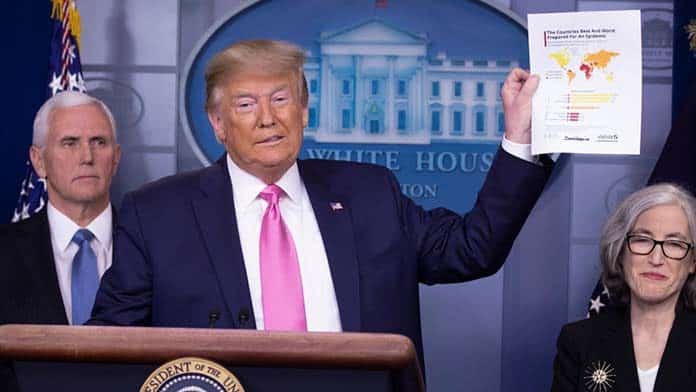 The United States, the world’s richest nation, is struggling to deal with the coronavirus due to decades of government cutbacks and a dysfunctional political system headed by a President, Donald Trump, who is a charlatan and an habitual liar.

The US now has more deaths from coronavirus than any other country.

New York City’s appalling death count is an indictment of Trump, the free market and the private health care system in the US.

But the virus is not hitting everyone equally. It is workers and the poor dying in huge numbers as the product of a yawning class divide.

In New York, public advocate Jumaane Williams told The Guardian, the virus has exposed the two societies in one country, “One society was able to run away to the Hamptons or work from home and have food delivered to their door; the other society was deemed ‘essential workers’ and made to go out to work with no protection.”

Already 71 subway workers and bus drivers have died from coronavirus.

They were forced to buy their own masks and cleaning products for a month before their employer agreed to distribute them to all workers. African-American and Latino New Yorkers are dying at double the rate of white New Yorkers. They make up 70 per cent of the city’s essential workers.

The same is true across the country. In Wisconsin, black people are 6 per cent of population but account for 40 per cent of deaths from coronavirus.

Yet Trump is now pushing to end the lockdowns and re-open the economy, even as the virus is just starting to hit parts of the country.

He is more concerned with the profits of big corporations and keeping up the economic growth he thinks is important to his re-election chances than with protecting human lives.

In the context of the complete failure to control the spread of the virus this means thousands more people will die.

He first said he wanted the US to re-open for business by Easter, but has now nominated 1 May. Trump is encouraging protests by small far right groups against the lockdowns in US states run by Democratic Party governors.

Trump’s initial response to the pandemic in late January was to ignore WHO warnings saying, “We have only five people [with infection]. Hopefully everything is going to be great”.

Trump has purged and driven out advisers who don’t tell him what he wants to hear.

Luciana Borio was once on his National Security Council but left after a purge of the US Global Health Unit. She went public in late January saying that there would be a health crisis if Trump did not change course.

In April 2018, the Trump administration began dismantling the unit in charge of pandemic response. The administration made known it would cut the budget of the Centre for Disease Control and Prevention (CDC).

There has been a complete failure on the three basic measures for controlling a pandemic—widespread testing, contact tracing of those with the virus, and targeted quarantine.

US health authorities lost crucial weeks at the beginning of the virus’s spread due to an inability to carry out testing.

The CDC badly bungled the production of tests for the new virus, first refusing to use the test developed by the WHO and successfully used elsewhere, then producing faulty test kits.

This meant testing criteria had to be narrowly restricted and limited the number of tests that could be performed.

The US public health response has been weakened by years of cutbacks by both Republican and Democratic Presidents, Congresses and state governments.

In response a wave of workers’ resistance has emerged, with US workers going on strike to demand adequate protection from their employers.

Hundreds of Amazon workers have called in sick, held protests or gone on strike due to the company’s failure to offer protective gear or paid sick leave.

One warehouse in New York staged a walkout. The company is now the country’s second biggest employer.

They have also been strikes across 500 fast food restaurants in Chicago, health care workers in California and New York, and garbage collectors in Pittsburgh.

These sparks of resistance are the hope amidst the horror.