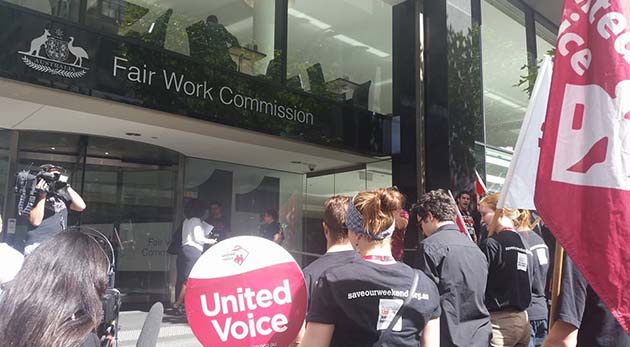 The Fair Work Commission’s cut to penalty rates is the latest in a long line of Arbitration Commission decisions attacking workers.

Before unions established themselves in Australia, the individual colonies simply used the law to stop workers organising for better pay and conditions.

In 1822, James Straighter, a NSW convict shepherd, was gaoled for five years for “inciting servants to organise for higher wages and rations”. By 1828, the Masters and Servants Act was copied from Britain, so that, “servants could be imprisoned and their wages forfeited for refusal to work.”
But as the factory system developed, unions were more able to stage effective industrial action. Arbitration emerged as a process where both parties would agree to be bound by the decision of an arbiter.

From 1886, the Inter-Colonial Trades Union Congresses debated the merits of arbitration. Those in favour argued there would be “less strikes”. The main opposition came from the new industry based unions. The Shearers’ Union boasted of 3180 strikes up to 1890. The Amalgamated Miners’ Association won 28 of the 29 strikes it led up to 1890.

That industrial militancy and confidence suffered devastating blows in the 1891 lock-out of shearers and 1894 maritime lock-outs. With the state machine fully mobilised with police, the courts and anti-strike laws to defeat workers, support for arbitration grew among union officials.

With Federation in 1901, the more far-sighted sections of the ruling class supported arbitration as a way to incorporate union leaders. They included prominent Liberal politicians like Charles Kingston, Premier of South Australia, Alfred Deakin, Victorian Attorney-General and future Liberal PM and Henry B. Higgins, future Federal Attorney-General and High Court justice. A Federal Arbitration Commission was established in 1904.

As a way to sell arbitration, a “living wage” was awarded in the Harvester Judgement of 1907. The new Arbitration Court established a minimum standard of seven shillings a day for male labourers and ten shillings for skilled tradesmen. For labourers, it meant a 27 per cent wage increase.
Arbitration “Awards” for each industry established a “basic wage” and a minimum set of working conditions. These were legally enforceable against the boss.

While unions gained official recognition and standing, arbitration was also designed to prevent strike action. There were fines and penalties if unions took industrial action to breach the Award agreement.

Arbitration is a process to manage class struggle. It is dressed up an “independent umpire”, despite being a body fully funded by the capitalist state. While the illusion is peddled that this court is neutral, its effort to balance the interests of workers and employers sits alongside the aim of ensuring capitalism’s long-term continuation and maintaining the bosses’ control of the workplaces. This means it leans towards the employers’ side in disputes.

On the eve of the Great Depression in 1928 and 1929 the Commission forced cuts on three key groups of workers. In the timber industry, it increased working hours from 44 to 48 a week and cut wages by 10 per cent. When unions went on strike against the Award, the Arbitration Court imposed fines and they were eventually forced back to work.

The Arbitration Commission then cut wages for all workers by 10 per cent and cut pensions in 1931—with the support of the Labor government of James Scullin.

Labour historian Brian Fitzpatrick wrote, “For those in full time work; allowing for unemployment, ‘real’ wages levels from the beginning of the 1930s were lower than they had been in 1901. This was all that had come of compulsory industrial arbitration.”

However the strength of workers’ industrial action can also influence the shape of arbitration decisions.

The most notable case, and one that still haunts our rulers, is the period from 1969-1974, when the Australian working class was one of the most militant in the world.

After 1969, when a general strike freed unionist Clarrie O’Shea from jail and broke the ability to impose fines, workers won pay rises and shorter hours. But when Bob Hawke was elected in 1983, the Arbitration Commission rubber stamped his wage cutting Prices and Incomes Accord with the ACTU. The Arbitration Commission attacked individual unions that breached it, like the Food Preservers’ Union, the Builders Labourers’ Federation (BLF) and the pilots union.

With WorkChoices John Howard actually abolished the Arbitration Commission, only to see Labor restore it under the Fair Work Act.

The fact that the ruling on penalty rates is so awful reflects the balance of class forces in 2017 being in the favour of the bosses, with the numbers of strikes the lowest in decades. Increasing unions’ ability to take successful industrial action is the only guarantee of protecting our penalty rates.